Vintage scuba. State of the art in the late 1960s - Underwater photographer Odd Henrik Johnsen Vintage scuba is a reference to the art of scuba diving using vintage-style gear, which is generally defined at this time as equipment dating from 1975 and earlier, and to that equipment. 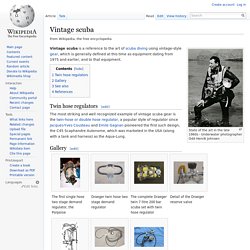 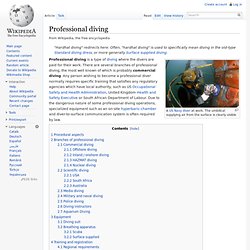 Often, "hardhat diving" is used to specifically mean diving in the old-type Standard diving dress, or more generally Surface supplied diving. A US Navy diver at work. Night diving. A canister style dive light Night diving is a Underwater diving done during the hours of darkness. 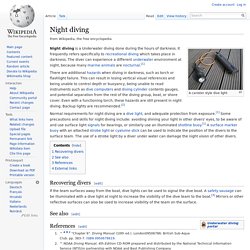 It frequently refers specifically to recreational diving which takes place in darkness. The diver can experience a different underwater environment at night, because many marine animals are nocturnal.[1] There are additional hazards when diving in darkness, such as torch or flashlight failure. Ascending and descending (diving) In underwater diving, ascending and descending is done using strict protocols to avoid problems caused by the changes in ambient pressure and the hazards of obstacles near the surface or collision with vessels. 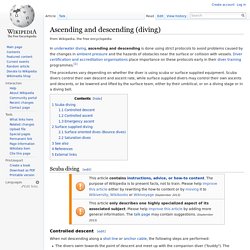 Diver certification and accreditation organisations place importance on these protocols early in their diver training programmes.[1] The procedures vary depending on whether the diver is using scuba or surface supplied equipment. Scuba divers control their own descent and ascent rate, while surface supplied divers may control their own ascents and descents, or be lowered and lifted by the surface team, either by their umbilical, or on a diving stage or in a diving bell. When not descending along a shot line or anchor cable, the following steps are performed: The divers swim towards the point of descent and meet up with the companion diver ("buddy"). When not ascending along a shot line or anchor cable, the following steps should be taken when ascending in open water: Technical Diving International. TDI provides courses and certification for divers and for instructors.[2][3] TDI history[edit] TDI was founded in 1993 by Bret Gilliam, John Comly, John Crea, David Sipperly[citation needed] and Mitch Skaggs after a split away from International Association of Nitrox and Technical Divers (IANTD) in 1993.[4][5] The agency aimed to provide training materials and education for specialized diving situations. 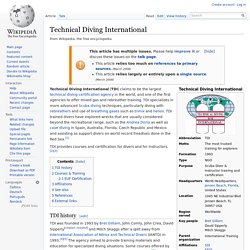 Some courses offered by TDI include open circuit courses such as diving with Nitrox[6] as well as Rebreather courses.[7][not in citation given] They also provide training for overhead environments like caves and wrecks, mixed gas training and were one of the first diving agencies to create a comprehensive insurance plan for technical diving instructors.[8] Diver communications. Diver communications are the methods used by divers to communicate with each other or with surface members of the dive team. 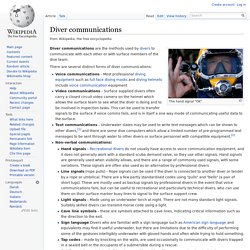 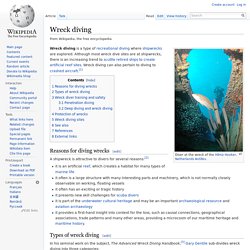 Although most wreck dive sites are at shipwrecks, there is an increasing trend to scuttle retired ships to create artificial reef sites. Buddy diving. A Navy buddy diver team checking their gauges together Buddy diving is the use of the buddy system by scuba divers and is a set of safety procedures that are intended to improve divers' chances of avoiding or surviving accidents in or under water by diving in a group of two or three divers. 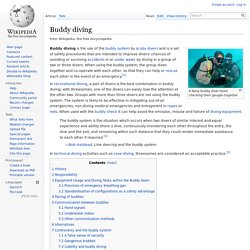 When using the buddy system, the group dives together and co-operate with each other, so that they can help or rescue each other in the event of an emergency.[1] The buddy system is the situation which occurs when two divers of similar interest and equal experience and ability share a dive, continuously monitoring each other throughout the entry, the dive and the exit, and remaining within such distance that they could render immediate assistance to each other if required.[1] In technical diving activities such as cave diving, threesomes are considered an acceptable practice.[2] History[edit] Diving medicine. A recompression chamber is used to treat some diving disorders, and for training divers to recognise the symptoms. 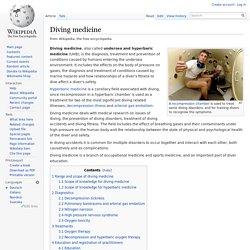 Diving medicine, also called undersea and hyperbaric medicine (UHB), is the diagnosis, treatment and prevention of conditions caused by humans entering the undersea environment. It includes the effects on the body of pressure on gases, the diagnosis and treatment of conditions caused by marine hazards and how relationships of a diver's fitness to dive affect a diver's safety. Technical diving. Technical diver during a decompression stop Technical diving (sometimes referred to as Tec diving) is a form of scuba diving that exceeds the conventional limits – especially depth and bottom time – of recreational diving. 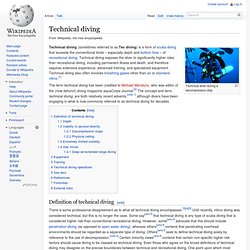 Technical diving exposes the diver to significantly higher risks than recreational diving, including permanent illness and death, and therefore requires extensive experience, advanced training, and specialized equipment. International Diving Regulators Forum. The International Diving Regulators Forum[1] (IDRF) confirmed its principals and purpose at their meeting in London in September 2009. The statement of principals and purpose states “The forum has agreed to work together towards mutual recognition to identify and implement best practice in diver training and assessment with the objective of harmonising cross-border diver training outside Europe.”

Members of the IDRF include ADAS (Australia), DCBC (Canada), HSE (UK), PSA (Norway), and the Secretariat General to the Sea Progess Committee (France). Émile Gagnan. Émile Gagnan (November 1900 – 1979) was a French engineer and co-inventor (together with French Navy diver Jacques-Yves Cousteau) of the diving regulator (a.k.a. demand-valve) used for the first Scuba equipment ("Aqua-Lung") in 1943. The demand-valve, or regulator, was designed for regulating gas in gas-generator engines, but was found to be excellent for regulating air-supply under varied pressure conditions. A year later, in 1947, Émile Gagnan and his family emigrated to Montreal, Canada and he transferred to the employ of Canadian Liquid Air Ltd. There he set up a lab and proceeded to engineer, design, prototype and patent an incredible number of SCUBA and undersea technology firsts; including the direct ancestors of virtually every type of Scuba regulator in common use today. Manifold (scuba) Two scuba diving 300 bar cylinders are connected together by an isolating manifold.

In scuba diving a manifold is used to connect two diving cylinders (tanks) with breathing gas, providing a greater amount of gas for longer dive times and greater safety due to redundancy. Diving with two or more cylinders is associated with technical diving. Schematic representation of double diving cylinders connected with isolating manifold. Longer and deeper dives require a greater amount of breathing gas, in turn requiring either a larger cylinder or multiple cylinders. A large tank (up to 18 L) is very heavy and tends to raise the diver's center of mass, making them unbalanced in water. Recreational diving. Divers off Key West, Florida Recreational diving or sport diving is a type of diving that uses SCUBA equipment for the purpose of leisure and enjoyment. In some diving circles, the term "recreational diving" is used in contradistinction to "technical diving", a more demanding aspect of the sport which requires greater levels of training, experience and equipment.

[nb 1][1] History[edit] Recreational scuba diving grew out of related activities such as Snorkeling and underwater hunting.[2] For a long time, recreational underwater excursions were limited by the amount of breath that could be held. Until the early 1950s, navies and other organizations performing professional diving were the only providers of diver training, but only for their own personnel and only using their own types of equipment. There were no training courses, in the modern sense, available to civilians who bought the first scuba equipment. Today, PADI alone issues approximately 950,000 diving certifications a year.[11] American Academy of Underwater Sciences. The American Academy of Underwater Sciences (AAUS) is a group of Scientific organizations and individual members who conduct scientific and educational activities underwater. It was organized in 1977 and incorporated in the State of California in 1983. Mission[edit] The mission of the AAUS is to facilitate the development of safe and productive scientific divers through education, research, advocacy, and the advancement of standards for scientific diving practices, certifications, & operations.

Sheck Exley. Sheck Exley (April 1, 1949 – April 6, 1994) was an American cave diver. Controlled buoyant lift. The controlled buoyant lift is an underwater diver rescue technique used by scuba divers to safely raise an incapacitated diver to the surface from depth. It is the primary technique for rescuing an unconscious diver from the bottom. It can also be used where the distressed diver has lost or damaged his or her diving mask and cannot safely ascend without help, though in this case the assisted diver would normally be able to control their own buoyancy. In the technique taught by BSAC, the rescuer faces the casualty and uses the casualty's buoyancy compensator to provide buoyancy for both divers as the rescuer makes a controlled ascent. Nemo 33. Coordinates: An underwater house at Nemo, with the 34.5m deep pit in the background. Deep diving. Deep diving has different meanings depending on the context.

Freshwater diving. Underwater diving. John Bennett (diver) John Bennett (1959–2004) was a British SCUBA diver who is best known for setting a world record by becoming the first person to deep dive below a depth of 1,000 feet on self-contained breathing apparatus on 6 November 2001.[1][2] Bennett founded Atlantis Tech at the Atlantis Dive Resort in the Philippines.[3] In the early 2000s, Bennett and Ron Loos made the first dives to the MV Princess of the Orient wreck site in Manila Bay.[4][5] John Bennett was missing presumed dead on 15 March 2004 in a commercial diving incident in Korea.[6] He was declared legally dead in 2006, but the body has never been recovered.[7] Bennett was survived by his wife Gabby and their two children, Joshua and Katie.[8] World's deepest SCUBA dives.

Emergency ascent. An emergency ascent is an ascent to the surface by a diver in an emergency. More specifically it refers to any of several procedures for getting to the surface in the event of an out-of-air emergency, generally while scuba diving. Emergency ascents may be broadly categorised as independent ascents, where the diver is alone and manages the ascent by him/herself, and dependent ascents, where the diver is assisted by another diver, who generally provides breathing gas, but may also provide transportation or other assistance.