La princesa del Pop. Britney Spears. Britney Spears. El principe del Pop. Justin Timberlake. Justin Timberlake. La reina del Pop. Madonna. Madonna (entertainer) Madonna Louise Ciccone[2] (/tʃɪˈkoʊneɪ/ chi-KOH-nay) (born August 16, 1958) is an American singer-songwriter, actress, and businesswoman. One of the most prominent cultural icons for over three decades, she has achieved an unprecedented level of power and control for a woman in the entertainment industry. She attained immense popularity by pushing the boundaries of lyrical content in mainstream popular music and imagery in her music videos, which became a fixture on MTV. Madonna is known for continuously reinventing both her music and image, and for retaining a standard of autonomy within the recording industry. Music critics have praised her diverse and innovative musical productions which have also been known to induce controversy. 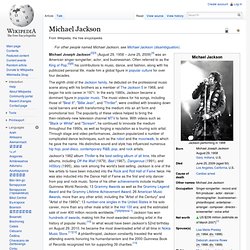 Often referred to as the King of Pop,[5][6] his contributions to music, dance, and fashion, along with his publicized personal life, made him a global figure in popular culture for over four decades. Life and career 1958–75: Early life and The Jackson 5 Jackson's childhood home in Gary, Indiana, showing floral tributes after his death In an interview with Martin Bashir, later included in the 2003 broadcast of Living with Michael Jackson, Jackson acknowledged that his father hurt him when he was a child, but was nonetheless a "genius", as he admitted his father's strict discipline played a huge role in his success.

Jackson (center) as a member of The Jackson 5 in 1972 1975–81: Move to Epic and Off the Wall 1982–83: Thriller and Motown 25: Yesterday, Today, Forever Time described Jackson's influence at that point as "Star of records, radio, rock video. La Canción más popular del mundo Pop. Michael Jackson - Thriller. ALBUMES RECOMENDADOS PARA ESCUCHAR. THE DIVING BOARD BY ELTON JOHN. The Diving Board. The album's premiere single, "Home Again", was released on 24 June 2013, the same day the album became available for pre-order. 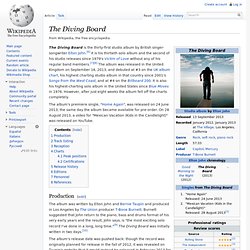 On 28 August 2013, a video for "Mexican Vacation (Kids in the Candlelight)" was released on YouTube. Production[edit] The album's release date was pushed back: though the record was originally planned for release in the fall of 2012, it was revealed on Taupin's website that it would instead be released in February 2013 for promotional reasons.[11] Later, it was pushed back again. It was revealed on 28 September 2012 in Rolling Stone magazine that John was unsatisfied with some songs on the album and that he had started to write more new songs for the album. He believed that many of the songs had a theme and that he wanted to write more songs after sitting on the project for so long.[12] On 8 January 2013 it was revealed by Taupin's website that the title of the album had been changed from The Diving Board to Voyeur.[15][16] 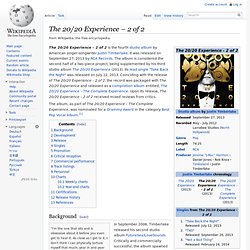 As close as I get to it, I don't think I can physically torture myself that much, year in and year out, and expect it to fulfill me the way that it does and the way that it is right now. BRITNEY JEAN BY BRITNEY SPEARS. Britney Jean. Britney Jean is the eponymous eighth studio album by American recording artist Britney Spears. 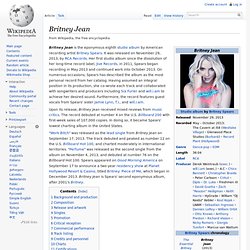 It was released on November 29, 2013, by RCA Records. Her first studio album since the dissolution of her long-time record label, Jive Records, in 2011, Spears began recording in May 2013 and continued work into October 2013. BANGERZ BY MILEY CYRUS. Bangerz (album) PRISM BY KATY PERRY. Prism (Katy Perry album) ARTPOP BY LADY GAGA. Artpop. Artpop (stylized as ARTPOP) is the third studio album by American recording artist Lady Gaga, released on November 6, 2013 by Streamline and Interscope Records. 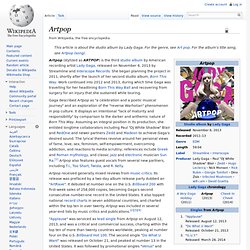 She began planning the project in 2011, shortly after the launch of her second studio album, Born This Way. Work continued into 2012 and 2013, during which time Gaga was travelling for her headlining Born This Way Ball and recovering from surgery for an injury that she sustained while touring. Artpop received generally mixed reviews from music critics. Its release was prefaced by a two-day album release party dubbed an "ArtRave". It debuted at number one on the U.S. Background and recording Gaga recruited Jeff Koons into the project in early 2013, but the two had previously met at a Metropolitan Museum of Art fashion event three years earlier, where Gaga provided a live performance.

As we understand, Gaga fans will get [the] Artpop app for free and can buy the album [through the] app. Conception and development. TOP 10 Canciones pop en Inglés esta semana. Top 10 Hot Pop Songs November 5, 2013 Weekly Chart. These are the hottest 10 pop songs of the week as determined by About Top 40. 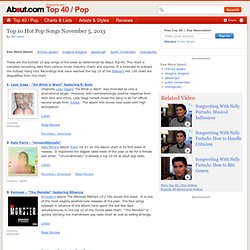 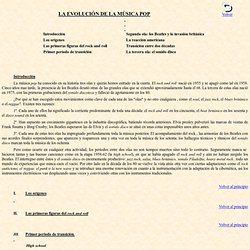