The men, the wummen an the animals o Scotland, set in stane forever... 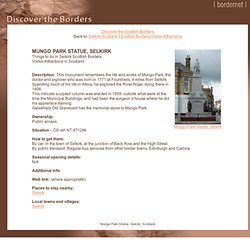 Spending much of his life in Africa, he explored the River Niger, dying there in 1806.This intricate sculpted column was erected in 1859, outside what were at the time the Municipal Buildings, and had been the surgeon’s house where he did his apprentice training.Galashiels Old Graveyard has the memorial stone to Mungo Park.

Ownership:Public access Situation – OS ref: NT 471286 How to get there: By car: In the town of Selkirk, at the junction of Back Row and the High Street.By public transport: Regular bus services from other border towns, Edinburgh and Carlisle. Seasonal opening details:N/A Additional info: Web link: (where appropriate): Places to stay nearby:Selkirk Local towns and villages:Selkirk. John Brown Statue, Balmoral Castle, Balmoral Estate, Crathie, Nr Ballater, Aberdeenshire, Scotland, UK. Badge creator Use Flickriver Badge Creator to create a badge linking to your photos, your group or any other Flickriver view. 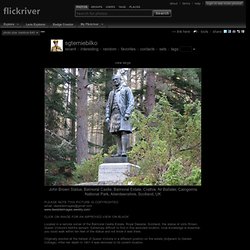 You can place your badge on your Flickr profile, Blog or Website. Add to your iGoogle or Netvibes page Flickriver widget for iGoogle or Netvibes can display almost any Flickriver view - most interesting today, by user, by group, by tag etc. Once added to your personalized homepage, just edit widget settings to select your desired view. Category:Statue of Jim Clark (Kilmany) Commando Memorial. The Commando Memorial is a Category A listed monument in Scotland, dedicated to the men of the original British Commando Forces raised during World War II. 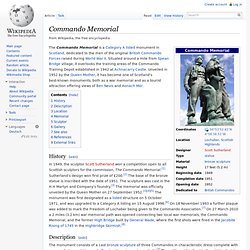 Situated around a mile from Spean Bridge village, it overlooks the training areas of the Commando Training Depot established in 1942 at Achnacarry Castle. Unveiled in 1952 by the Queen Mother, it has become one of Scotland's best-known monuments, both as a war memorial and as a tourist attraction offering views of Ben Nevis and Aonach Mòr. History[edit] Thomas Carlyle, a Remarkable Scottish Writer and Author of Sartor Resartus.

Mairiuna, I finally found the picture of Thomas Carlyle’s statue that we took while crossing the little village of Ecclefechan, in the southern region of Dumfries & Galloway, close to the English border. 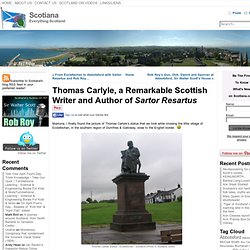 Category:Statue of Alexander Selkirk. Ghost of Scotish Woods : Amazing Sculptures by Rob Mulholland. The forests of Scotland have long been a favorite holiday destination for both local residents and tourists. 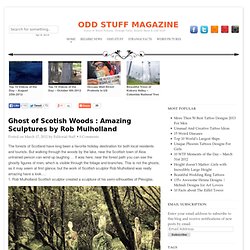 But walking through the woods by the lake, near the Scottish town of Aloa untrained person can wind up laughing … It was here, near the forest path you can see the ghostly figures of men, which is visible through the foliage and branches. This is not the ghosts, as it may seem at first glance, but the work of Scottish sculptor Rob Mulholland was really amazing have a look…. 1. Rob Mulholland Scottish sculptor created a sculpture of his semi-silhouettes of Plexiglas. 3. Translucent acrylic plexiglass has a wonderful property to distort the reflection of light in a way that creates the effect of partial invisibility. 5. 7. 8. 9. 11. 12. Ads by Google. The Tannochbrae Tearoom. Mention Auchtermuchty and the name, “Jimmy Shand” always springs to mind. 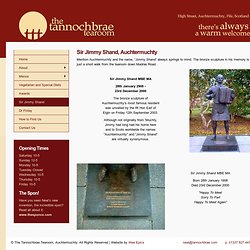 The bronze sculpture in his memory is just a short walk from the tearoom down Madras Road. Sir Jimmy Shand MBE MA 28th January 2908 -23rd December 2000 The bronze sculpture of Auchtermuchty’s most famous resident was unveiled by the Rt Hon Earl of Elgin on Friday 12th September 2003. Although not originally from ‘Muchty, Jimmy had long had his home here and to Scots worldwide the names “Auchtermuchty” and “Jimmy Shand” are virtually synonymous. Overview of Desperate Dan Statue. A sizeable representation in bronze of the famous cartoon character, the Desperate Dan Statue has strode along the High Street in Dundee since 2001. 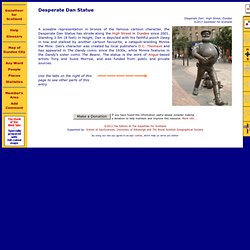 Standing 2.5m (8 feet) in height, Dan is depicted with his faithful pooch Dawg in tow and stalked by another cartoon favourite, a catapult-wielding Minnie the Minx. Dan's character was created by local publishers D.C. Desperate Dan Statue Dundee. Play our new game - Whack The Haggis!! 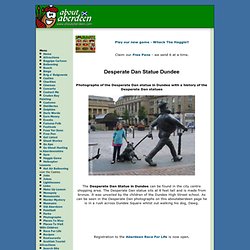 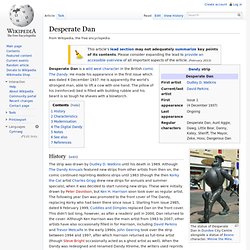 He made his appearance in the first issue which was dated 4 December 1937. He is apparently the world's strongest man, able to lift a cow with one hand. The pillow of his (reinforced) bed is filled with building rubble and his beard is so tough he shaves with a blowtorch. History[edit] Characteristics[edit] Flora MacDonald's Statue, Inverness. Overview of Flora MacDonald. Reluctant heroine. 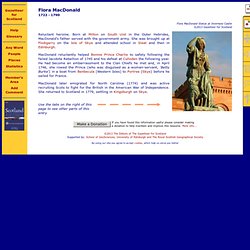 Born at Milton on South Uist in the Outer Hebrides, MacDonald's father served with the government army. She was brought up at Flodigarry on the Isle of Skye and attended school in Sleat and then in Edinburgh. MacDonald reluctantly helped Bonnie Prince Charlie to safety following the failed Jacobite Rebellion of 1745 and his defeat at Culloden the following year. He had become an embarrassment to the Clan Chiefs he met and, in April 1746, she rowed the Prince (who was disguised as a woman-servant, 'Betty Burke') in a boat from Benbecula (Western Isles) to Portree (Skye) before he sailed for France. Flora MacDonald. Her father died when she was a child, and her mother was abducted and married by Hugh MacDonald of Armadale, Skye. She was brought up under the care of the chief of her clan, the MacDonalds of Clanranald her father's cousin, and was partly educated in Edinburgh.

Related:  work and business   -  Edinburgh Sculpture & Statues   -  Scottish Politics   -  Scottish Geology   -  Scottish coinage   -  Scottish Resources   -  Celtic/Scottish/Welsh   -  Related Articles: Colonial statues   -  Scottish Meshsurvivors   -  Related articles: Xenophobic attacks/Statues   -  Brain Hacks   -  Standard Model - Wikipedia, the free encyclopedia   -  Home : Scottish Parliament   -  100 Ways to Serve Others | Learn This   -  Stonehenge Rebuilt   -  Celtic mythology - Wikipedia, the free encyclopedia   -  The Burning House   -  30 Life-Enhancing Things You Can Do in 30 Minutes or Less   -  How To Make Your Own Lotion Bars! | One Good Thing by Jillee   -  Rethinking Oral Health Care: A Homemade Toothpaste Recipe for Tooth Remineralization   -  50 Important Advice and Things To Know That People Usually Aren't Told About - Lifehack   -  Mysterious paper sculptures « Central Station   -  20 Things That Mentally Strong People Don't Do   -  These 19 Rooms May Seems Normal At First..Till You Find Their Hidden Secrets. Then They're GENIUS.   -  10 Signs You Have Found Your Soulmate | Spirit Science and Metaphysics   -  How to Remove Attachments to Past Relationships | Spirit Science   -  5 Steps to Transform Yourself into Higher Self   -  How to fake a British or American Accent | LearningwithJohn.com   -  Education   -  Enterprise