Culture - Why are zombies still so popular? With The Walking Dead’s record-breaking ratings and World War Z winning big at the box office, there’s no end of love for zombies. 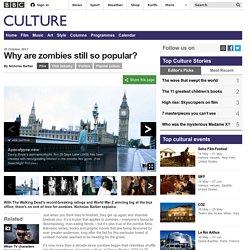 Nicholas Barber explains. Just when you think they’re finished, they get up again and shamble towards you. It’s a truism that applies to zombies − everyone’s favourite decomposing, man-eating fiends − but it’s also true of the zombie films, television series, books and graphic novels that are being devoured by ever greater audiences, long after the fad for this particular breed of undead monster seemed to be heading for the grave. It’s now more than a decade since zombies began their relentless shuffle into the mainstream of popular culture. In Danny Boyle’s 2002 hit 28 Days Later the mindless cannibals weren’t called zombies − they were simply ‘the infected’ − but they were close enough to remind the film industry that there was money to be made from the dormant horror sub-genre. And zombie fever hasn’t been confined to cinemas. Why Zombies Are Everywhere - Zombies in Pop Culture. You probably know that zombies are popular right now. 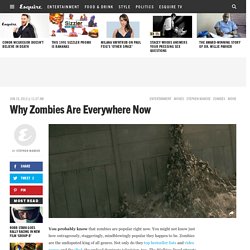 You might not know just how outrageously, staggeringly, mindblowingly popular they happen to be. Zombies are the undisputed king of all genres. Not only do they top bestseller lists and video games and the iPad, the undead dominate television, too. The Walking Dead attracts somewhere between three to four times the viewers of Mad Men on a typical night. And this week, World War Z arrives in theaters — the Brad Pitt adaptation of the bestselling novel. Such pop culture dominance naturally requires some kind of explanation. I don't think any of these diverse theories are wrong. Why Won’t Zombies Just Die? (Crown Publishing Group) With zombie sightings rising quickly over the weekend, I tried to calm myself by contacting some undead experts. 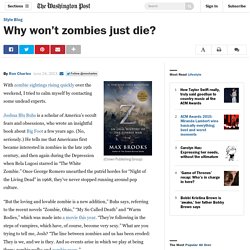 Joshua Blu Buhs is a scholar of America’s occult fears and obsessions, who wrote an insightful book about Big Foot a few years ago. (No, seriously.) He tells me that Americans first became interested in zombies in the late 19th century, and then again during the Depression when Bela Lugosi starred in “The White Zombie.” Once George Romero unearthed the putrid hordes for “Night of the Living Dead” in 1968, they’ve never stopped running around pop culture. “But the loving and lovable zombie is a new addition,” Buhs says, referring to the recent novels “Zombie, Ohio,” “My So Called Death” and “Warm Bodies,” which was made into a movie this year. The Top 20 Zombie Novels of the Last Decade — Barnes & Noble Reads. Back in the ‘80s and ’90s—during my time as a bookstore manager—zombies weren’t even on the radar when it came to genre fiction fodder. 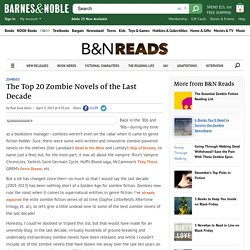 Sure, there were some well-written and innovative zombie-powered novels on the shelves (like Lansdale’s Dead in the West and Lumley’s Ship of Dreams, to name just a few) but, for the most part, it was all about the vampire: Rice’s Vampire Chronicles, Yarbro’s Saint-Germain Cycle, Huff’s Blood saga, McCammon’s They Thirst, GRRM’s Fevre Dream, etc.

But a lot has changed since then—so much so that I would say the last decade (2003-2013) has been nothing short of a Golden Age for zombie fiction. Zombies now rule the roost when it comes to supernatural entities in genre fiction. The Evolution Of Zombies In Pop Culture  I'm sure most of you probably know at least one, if not more, people like me. 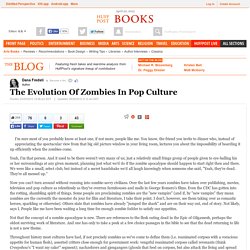 You know, the friend you invite to dinner who, instead of appreciating the spectacular view from that big old picture window in your living room, lectures you about the impossibility of boarding it up efficiently when the zombies come. Yeah, I'm that person. And it used to be there weren't very many of us; just a relatively small fringe group of people given to eye-balling his or her surroundings at any given moment, planning just what we'd do if the zombie apocalypse should happen to start right then and there. We were like a small, select club, but instead of a secret handshake we'd all laugh knowingly when someone else said, "Yeah, they're dead. They're all messed up.

" Now you can't turn around without running into zombie-savvy civilians. Not that the concept of a zombie apocalypse is new. Dana Fredsti is the author of Plague Town [Titan, $7.99]. Brraaiins! How Zombies Overran Pop Culture. They moan. 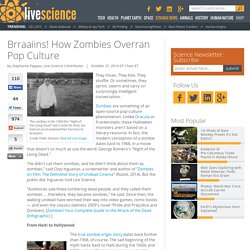 They bite. They shuffle. Or sometimes, they sprint, swarm and carry on surprisingly intelligent conversation. Zombies are something of an open-source pop-culture phenomenon. Unlike Dracula or Frankenstein, these Halloween monsters aren't based on a literary resource. "He didn't call them zombies, and he didn't think about them as zombies," said Ozzy Inguanzo, a screenwriter and author of "Zombies on Film: The Definitive Story of Undead Cinema" (Rizzoli, 2014). The 10 Best Zombie Movies. Trailer - White Zombie (1932) White Zombie (1932) Night of the Living Dead (1968) Dawn of the Dead (1978) Shaun of the Dead (2004) [Rec] (2007) Zombieland (2009) World War Z (2013)