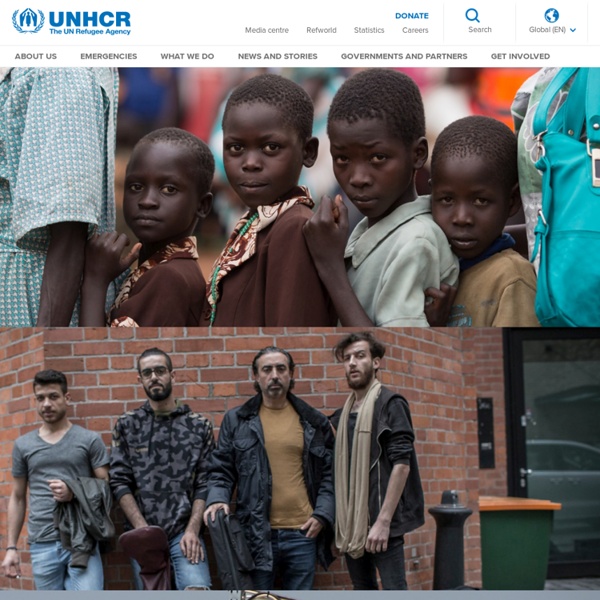 Australia's aid program The Australian Government’s development policy Australian aid: promoting prosperity, reducing poverty, enhancing stability and performance framework Making Performance Count: enhancing the accountability and effectiveness of Australian aid outline key aspects of our aid program. Documents Australia's development policy and performance framework are available in PDF and Word formats. The need for change The world has changed—and our aid program is changing too. Refugee or migrant Refugee or Migrant - word choice matters. © UNHCR GENEVA, July 11 (UNHCR) – With more than 65 million people forcibly displaced globally and boat crossings of the Mediterranean still regularly in the headlines, the terms 'refugee' and 'migrant' are frequently used interchangeably in media and public discourse. But is there a difference between the two, and does it matter? Yes, there is a difference, and it does matter. The two terms have distinct and different meanings, and confusing them leads to problems for both populations. Here's why:

US, France, Britain set up bases in Libya US, France, Britain set up bases in Libya US troops (file photo) Britain, France and the United States have dispatched hundreds of military advisors to Libya to set up military bases in the country's oil-rich east, reports say. Several Libyan diplomats have been quoted by news outlets as saying these forces are setting up bases in the eastern cities of Benghazi and Tobruk -- the two oil-rich cities that have been liberated by the opposition forces. British and US special forces entered Libyan port cities of Benghazi and Toburk on February 23 and 24. Three Indian navy warships are also expected to be deployed in the region.

Why Flee Syria? With the refugee crisis worsening as many Syrians attempt to flee to Europe, many people may find themselves wondering just how the war in that country got so bad, and why so many are fleeing now. Here, then, is a very brief history of the war, written so that anyone can understand it: Syria is a relatively new country: Its borders were constructed by European powers in the 1920s, mashing together several ethnic and religious groups. Since late 1970, a family from one of those smaller groups — the Assads, who are Shia Alawites — have ruled the country in a brutal dictatorship.

10 more Maltese fly home from Libya, another arrives on frigate Passengers disembark from HMS Cumberland. 10 more Maltese oil workers arrived back in Malta this evening from Libya. They were flown in on a private Medavia flight, the third organised in coordination with the Maltese government. Another worker arrived this afternoon on HMS Cumberland and 23 are on their way back on a catamaran. Médecins Sans Frontières Core documents outlining MSF's principles are the Charter,[5] the Chantilly Principles, and the later La Mancha Agreement.[6] Governance is addressed in Section 2 of the Rules portion of this final document. MSF has an associative structure, where operational decisions are made, largely independently, by the five operational centres (Amsterdam, Barcelona-Athens, Brussels, Geneva and Paris). Common policies on core issues are coordinated by the International Council, in which each of the 24 sections (national offices) is represented. The International Council meets in Geneva, Switzerland, where the International Office, which coordinates international activities common to the operational centres, is also based.

The Refugee Project Every day, all over the world, ordinary people must flee their homes for fear of death or persecution. Many leave without notice, taking only what they can carry. Many will never return. They cross oceans and minefields, they risk their lives and their futures. When they cross international borders, they are called refugees. As of 2016, over 20 million refugees were registered with the UN all over the globe. The guardian Gaddafi gives an interview to western journalists Muammar Gaddafi was labelled "delusional" by the US ambassador to the UN, after he laughed off suggestions that he should go into exile and insisted that he had the support of the Libyan people. The dictator's defiance came as the prospects of western military power being used against him moved closer. The US deployed naval and air force units around the country and Britain's prime minister, David Cameron, ordered contingency plans for a no-fly zone. The US ambassador to the UN, Susan Rice, also criticised Gaddafi as "unfit to lead" and "disconnected from reality" after the Libyan leader, speaking to news organisations including the BBC, mocked his opponents. "All my people love me.

United Nations High Commissioner for Refugees United Nations agency mandated to protect and support refugees The United Nations High Commissioner for Refugees (UNHCR) is a United Nations agency with the mandate to protect refugees, forcibly displaced communities and stateless people, and assist in their voluntary repatriation, local integration or resettlement to a third country. UNHCR‘s mandate does not apply to Palestinian refugees, who are assisted by UNWRA. History[edit] Office of the United Nations High Commissioner for Refugees Following the demise of the League of Nations and the formation of the United Nations the international community was acutely aware of the refugee crisis following the end of World War II. Ten things you didn’t know about refugees With 45.2 million displaced by violence, persecution or rights abuses, the number of refugees is higher than at any time since 1994, says UNHCR Today is World Refugee Day - and the latest statistics from the U.N. refugee agency (UNHCR) show world refugee numbers are higher than at any time since 1994. As U.N. refugee chief Antonio Gutteres put it at a recent news conference: “Each time you blink, another person is forced to flee.” UNHCR’s annual report shows that some 45.2 million people were uprooted by violence, persecution or rights abuses as of the end of last year, but the numbers also challenge some common misconceptions about refugees and displacement. Here are 10 things you may not have known. 1.

The day the Katiba fell - Libya Gaddafi's forces lost control of the Katiba after three days of fierce clashes [Evan Hill/Al Jazeera] Benghazi, Libya - If Benghazi, Libya's second city, has become the symbolic heart of the revolution in this north African nation, then the battle to overwhelm the military garrison here was the revolt's key turning point. Over the course of three days, civilians opposed to the 42-year rule of Colonel Muammar Gaddafi managed to outlast and overpower a fortified base guarded by detachments of several Libyan military units, one of them the feared and reportedly highly trained Khamis Brigade - a special forces unit led by Gaddafi's youngest son. In the end, both anti-government protesters and Gaddafi loyalists lost hundreds and many more were wounded, and Gaddafi's forces fled the city. Benghazi fell completely into opposition hands and became the seat of the national coalition bent on ending the Gaddafi regime. A sudden spark

UNHCR Population Statistics Welcome to the UNHCR Population Statistics Database The database currently contains data about UNHCR's populations of concern from the year 1951 up to 2014 and you can use it to investigate different aspects of these populations: their general composition by location of residence or origin, their status (refugees, asylum seekers, internally displaced persons, etc.), their evolution over time, and so on.. In each of the screens in the system you start by selecting the sub-set of data you are interested in, choosing one or more countries or territories of residence and/or origin. You can focus on specific types of population by checking the boxes for only those you are concerned with, and you can summarise the data by checking the boxes for only those data items by which you wish the data to be broken down. General notes

The work of the Office of the UN High Commissioner for Refugees (UNHCR) is humanitarian and non-political. Its principal functions are to provide international protection to refugees and other persons of concern, including stateless people, and to seek durable solutions for them. Protection includes preventing refoulement (the involuntary return of a refugee or a person of concern to a country where he or she may have a well-founded fear of persecution) and ensuring that host countries follow international norms in the treatment of refugees. by jerry_jenkins Dec 12