But there are so many of them. Bob Carr has brought to the surface one of the undercurrents in our political debate which is usually left un-analysed and has long intrigued me – the connection between refugee and population policy. 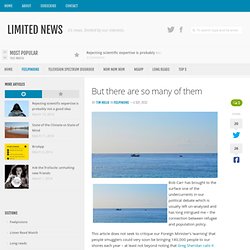 This article does not seek to critique our Foreign Minister’s ‘warning’ that people smugglers could very soon be bringing 180,000 people to our shores each year – at least not beyond noting that Greg Sheridan calls it “neither alarmist nor hysterical” and that Jon Kudelka nailed it yet again. My 2c on population – Australia is not an island.

Population policy is one of those deeply vexed issues that often seems to bring out the worst in political discussions. 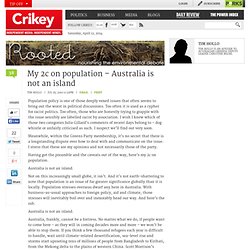 Too often it is used as a cypher for racist politics. Too often, those who are honestly trying to grapple with the issue sensibly are labelled racist by association. I wish I knew which of those two categories Julia Gillard’s comments of recent days belong to – dog whistle or unfairly criticised as such. I suspect we’ll find out very soon. Welcome to Australia. Here’s how the Australian government addresses you if you’re rich and have time on your hands. 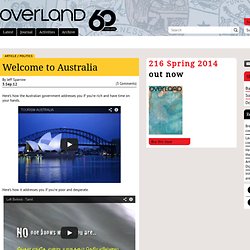 Here’s how it addresses you if you’re poor and desperate. It gets worse. The clip below, from the same series, directly addresses Tamils, warning them that Australia has decided that their situation has improved and they’re not likely to receive asylum. One possible reason it is a bit unlikely we could actually get 180000 boat people a year.

Read the UNHCR report: Australia only took 5,242 asylum seekers in 2011. That's nothing. Corpses pile up. The ‘asylum seeker debate’ in Australia is not really a debate. 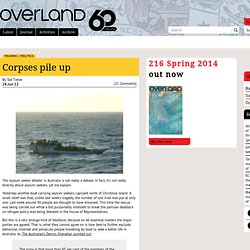 In fact, it’s not really directly about asylum seekers. Let me explain. Yesterday another boat carrying asylum seekers capsized north of Christmas Island. A small relief was that, unlike last week’s tragedy, the number of lost lives was put at only one. Last week around 90 people are thought to have drowned. But this is a very strange kind of deadlock, because on all essential matters the major parties are agreed. The irony is that more than 95 per cent of the members of the House of Representatives and slightly less in the Senate support offshore processing, and the Greens are the only party against, yet agreement on some compromise cannot be made.

Those reasons are defined primarily by the political needs of elites to create scapegoats and distractions for their failure to provide security to ordinary people already living here – not of borders, but of a social kind. PM calls in expert group after asylum seeker Bill fails in Senate. Asylum seeker Bill defeated in the Senate 39-29 Gillard will create a taskforce to find asylum-seeker solution Former Defence Chief Angus Houston will lead taskforce THE political stalemate over asylum seekers is set to continue over Parliament's long winter break after Coalition and Greens senators teamed up to kill off a bill to restore offshore processing.

But Prime Minister Julia Gillard has responded by appointing former Defence chief Angus Houston to lead an independent expert group to examine asylum policy and deliver a report on a way forward by the time Parliament resumes on August 14. Mr Houston will be joined by refugee policy expert Paris Aristotle and former Department of Foreign Affairs and Trade Secretary Michael L'Estrange. "They will act independently. They will form their own views based on the evidence and the facts," Ms Gillard told said in Canberra. Parliament will move on the group's recommendations within weeks of the report being delivered. Refugee debate is now dominated by compromise, not core promises. God oh god, it’s Christmas and I wanted to write some sort of light frippery that allowed me to get in a joke about news that Molly Meldrum’s condition being described as ‘stable’ was a lifetime first. 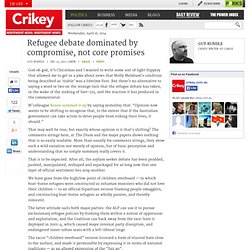 But there’s no alternative to saying a word or two on the strange turn that the refugee debate has taken, in the wake of the sinking of Siev-221, and the reaction it has produced in the commentariat. M’colleague Keane summed it up by saying yesterday that: “Opinion now seems to be shifting to recognise that, to the extent that if the Australian government can take action to deter people from risking their lives, it should.” That may well be true, but exactly whose opinion is it that’s shifting? The comments strings here, at The Drum and the major papers shows nothing that is so easily readable. More than usually for comments strings, they show such a wild variation not merely of opinion, but of basic perception and understanding that no simple summary really covers it. 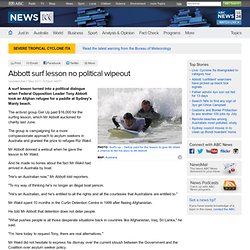 The activist group Get Up paid $16,000 for the surfing lesson, which Mr Abbott auctioned for charity last June. The group is campaigning for a more compassionate approach to asylum seekers in Australia and granted the prize to refugee Riz Wakil. Mr Abbott donned a wetsuit when he gave the lesson to Mr Wakil. And he made no bones about the fact Mr Wakil had arrived in Australia by boat. "He's an Australian now," Mr Abbott told reporters. Prime Minister Julia Gillard gambles on asylum seekers. Asylum seekers board a barge from HMAS Leeuwin after their boat was intercepted near Christmas Island. Picture: Colin Murty HWT Image Library In exchange, Australia has agreed to accept five refugees for every one we swap, resettling up to 4000 genuine refugees from Malaysia. What really lies behind refugee policy - Unleashed.

Find More Stories What really lies behind refugee policy Tad Tietze The Christmas Island boat tragedy foregrounded debates that were already gaining in prominence and shrillness over the past year or so, disagreements over the ins and outs of Australia’s refugee policy. The myths and reality of seeking asylum. Stop the fear, not the boats - Unleashed. Find More Stories Stop the fear, not the boats Ben Eltham Should Australians care how many people seek asylum on our shores? 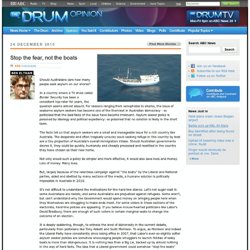 In a country where a TV show called has been a consistent top-rater for years, the question seems almost absurd. For reasons ranging from xenophobia to shame, the issue of seaborne asylum seekers has become one of the thorniest in Australian democracy - so politicised that the bald facts of the issue have become irrelevant. The facts tell us that asylum seekers are a small and manageable issue for a rich country like Australia. Not only would such a policy be simpler and more effective, it would also save lives and money. But, largely because of the relentless campaign against “the boats” by the Liberal and National parties, aided and abetted by many sections of the media, a humane solution is politically impossible in Australia in 2010.

It's not difficult to understand the motivations for the hard-line stance. It has been like this since before Federation. Email x. Malaysia defends asylum seeker record. Updated Sun 8 May 2011, 2:24pm AEST Malaysia's top representative in Australia has responded to criticism of his country's treatment of asylum seekers and refugees, saying they are treated with respect and dignity. 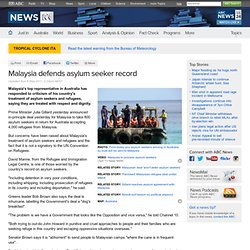