Afghan Refugees. Before the recent upsurge in violence in Syria and Iraq, the United Nations High Commissioner for Refugees (UNHCR) reported that Afghanistan remained the world’s top producer of refugees for the 32nd year in a row. 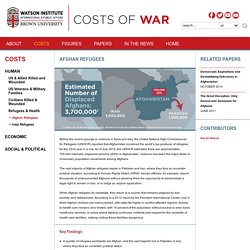 As of July 2014, the UNHCR estimated there are approximately 700,000 internally displaced persons (IDPs) in Afghanistan. Violence has been the major factor in involuntary population movements among Afghans. The vast majority of Afghan refugees reside in Pakistan and Iran, where they face an uncertain political situation, according to Human Rights Watch (HRW). Iranian officials, for example, deport thousands of undocumented Afghans without allowing them the opportunity to demonstrate a legal right to remain in Iran, or to lodge an asylum application. When Afghan refugees do repatriate, they return to a country that remains plagued by war, poverty, and lawlessness. Key Findings Recommendations. Afghanistan: The other refugee crisis. In 1919, a British agent in Kabul complained in a letter to the Raj that the Afghan monarch "has always shown much kindness to the Germans and Austrians and has frequently entertained them and visited them". 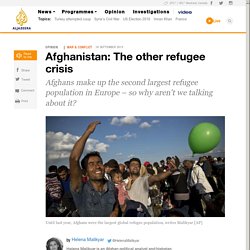 He was referring to over 120 German and Austrian prisoners of war who had fled camps in Russia and taken refuge in Afghanistan during World War I. Afghanistan took them in regardless of the fact that, at the time, its foreign relations were under British control. The same largesse was bestowed upon many Jewish families who escaped the Soviet Union during World War II and the ensuing Stalin-era purges. In turn, Germany, Austria and other Western countries have opened their arms to Afghan refugees in the past four decades of perpetual violence in Afghanistan. Second largest group Until last year, Afghans were the largest global refugee population at 2.6 million people - almost 10 percent of the country's entire population. Also read: Could Syria be Putin's Afghanistan? Mysterious death. 1,000 Afghans flee fighting every day. About 1,000 Afghans have fled their homes due to fighting each day since the beginning of the year, and aid workers can’t reach many of them, the UN says. 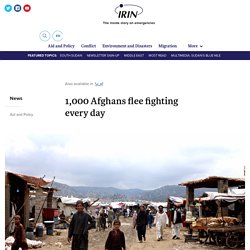 Internal displacement due to conflict rose 40 percent from 2014 to 2015, and this year could see another increase. About 118,000 people fled their homes in the first four months of 2016, the UN’s emergency aid coordination body, OCHA, said in a report yesterday. “It’s been a rather alarming rise in the number of families displaced,” Stacey Winston, an OCHA spokeswoman in the Afghan capital, Kabul, told IRIN. The northeastern province of Kunduz has been especially hard hit this year.

So far, 22,400 people have been forced from their homes by fighting between the Taliban and government forces backed by international military. Many of those displaced have been repeatedly forced from their homes. The Taliban briefly took control of the provincial capital, Kunduz City, last October. The situation is similar throughout much of the country. Afghan refugees in Iran & Pakistan. Source: ICMC Europe, Welcome to Europe! 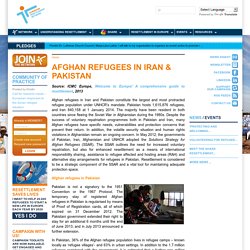 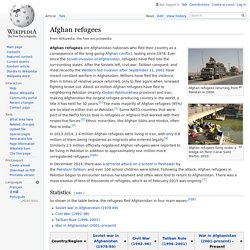 Following the attack, Afghan refugees in Pakistan began to encounter serious harassment and often were told to return to Afghanistan. There was a mass exodus of tens of thousands of refugees, which as of February 2015 was ongoing.[7] Statistics[edit] As shown in the table below, the refugees fled Afghanistan in four main waves:[5][8] See also[edit] Afghan diaspora References[edit]