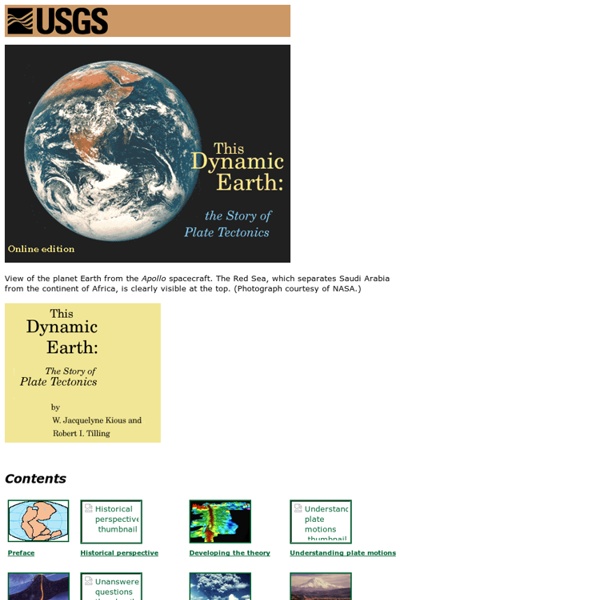 View of the planet Earth from the Apollo spacecraft. The Red Sea, which separates Saudi Arabia from the continent of Africa, is clearly visible at the top. (Photograph courtesy of NASA.) Ordering Instructions This book was originally published in paper form in February 1996 (design and coordination by Martha Kiger; illustrations and production by Jane Russell). It is for sale from: U.S. or it can be ordered directly from the U.S. Call toll-free 1-888-ASK-USGS Or write to USGS Information Services Box 25286, Building 810 Denver Federal Center Denver, CO 80225 303-202-4700; Fax 303-202-4693 Version History Version 1.20 The online edition contains all text from the original book in its entirety. Linked Websites Please visit the Smithsonian Institution This Dynamic Planet website. See also This Dynamic Planet, the map showing the Earth's physiographic features, current plate movements, and locations of volcanoes, earthquakes, and impact craters.

Geo-Primary Assessing Primary Geography Teacher assessment is a complex matter, but here are a few tools to help you with part of the process. Principles and purposes of assessment These are some special assessment tasks devised by teachers in Staffordshire and Derby. They are designed to be completed by pupils, generally towards the end of a unit, to help teachers judge what pupils know, understand and can do, in order to help teachers assess pupils' progress.

Science Education News: HHMI Debuts EarthViewer App for iPad EarthViewer shows continental arrangements as they shift through time—including Pangea from 215 million years ago.Have you ever wanted to go back in time to see what the Earth looked like 400 million years ago? You can with the EarthViewer, a free, interactive app designed for the iPad, that lets users explore the Earth’s history with the touch of a finger by scrolling through 4.5 billion years of geological evolution. The app, developed by HHMI’s BioInteractive team, tracks the planet’s continental shifts, compares changes in climate as far back as the planet’s origin, and explores the Earth’s biodiversity over the last 540 million years. It combines visual analysis with hard data, and helps students make connections between geological and biological change. Download the HHMI EarthViewer app from the App Store. We're very interested in how the app can be used in formal education.

Historic Earthquakes One person injured and extensive damage to roads and bridges. Structural damage occurred in the villages of Slana and Mentasta Lake, minor structural damage occurred at Fairbanks and items were knocked from shelves at Cantwell, Denali National Park, Glenallen, Paxson and Tok. Damage estimated at 20 million U.S. dollars. Wegener's Puzzling Evidence Exercise (6th Grade) Although Alfred Wegener was not the first to suggest that continents have moved about the Earth, his presentation of carefully compiled evidence for continental drift inspired decades of scientific debate. Wegener's evidence, in concert with compelling evidence provided by post World War II technology, eventually led to universal acceptance of the theory of Plate Tectonics in the scientific community. The following files are needed for this exercise and can be downloaded in pdf format (Teacher Overview, (For Teachers) Wegener's Key to Continental Positions for grade 6, Student Puzzle Pieces, Key to Wegener's Evidence sheet, and Student Map of the World Today). If students need additional hints beyond those provided below, there is a Puzzle Outline Hint to be used as a base for the puzzle. Objectives

UK Official name: United Kingdom of Great Britain and Northern Ireland Location: located off the north-western coast of continental Europe. It spans an archipelago including Great Britain, the northeastern part of the island of Ireland, and many smaller islands.Northern Ireland is the only part of the UK with a land border with another sovereign state, sharing it with the Republic of Ireland Apart from this land border, the UK is surrounded by the Atlantic Sea, the North Sea, the English Channell, and the Irish Sea.

GSA EarthCache - An Introduction How to Have Fun & Learn about the Earth at EarthCache™ Sites Visiting an EarthCache site is a great way to learn more about our wonderful world. It can take you to many places that you would not normally visit, and teach you about why those places are special or unique. EarthCache sites can also teach you and your family important skills such as navigation and map reading. Make a Seismograph Science Project You may have heard of the Richter scale used to study earthquakes. In 1935 Charles Richter developed a system to measure the magnitude --or amount of energy released--of an earthquake. Each whole number on the Richter scale indicates a tenfold increase in amplitude (greatness in size). Thus, a 7.5 earthquake on the Richter scale actually has ten times the amplitude of a 6.5 earthquake.

Guesthollow.com - Homeschool Curriculum, Printables & Resources Click here to return to our main notebooking printables page. All printables in this section require free Adobe Acrobat Reader. These lapbooking downloads are our gift to you. You can download them for free! For information about lapbooking and links to more freebies, please visit Jimmie's excellent Squidoo lens!

Crayon Rocks We've had a very, very warm winter here in Michigan. With such little snow, the ground has been exposed and my little rock hounds have been collecting rocks again. I thought we'd revisit the types of rocks again (sedimentary, metamorphic and igneous) - but this time give them a more active and visual way to think about how each are formed. There are many examples of creating rocks from crayons, but this pdf from the the Exploratorium is very helpful. Reproduction MainPlaceHolderTop MainPlaceHolder Human reproduction is when an egg cell from a woman and a sperm cell from a man unite and develop in the womb to form a baby.