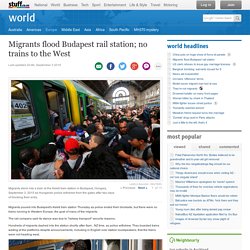 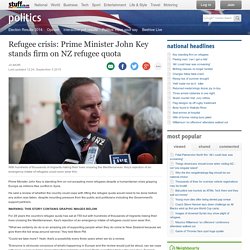 Prime Minister John Key is standing firm on not accepting more refugees despite a humanitarian crisis gripping Europe as millions flee conflict in Syria. 'Stubborn' National alone in refugee debate. The heart-breaking image of a young boy's lifeless body, discovered washed up on a beach, is heightening calls for something to be done about the refugee crisis in Europe. 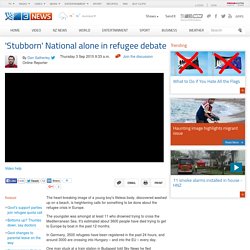 The youngster was amongst at least 11 who drowned trying to cross the Mediterranean Sea. It's estimated about 3600 people have died trying to get to Europe by boat in the past 12 months. In Germany, 3500 refugees have been registered in the past 24 hours, and around 3000 are crossing into Hungary – and into the EU – every day. One man stuck at a train station in Budapest told Sky News he fled Afghanistan with his family because it was impossible to stay. "Al-Qaida attack us, [Islamic State] is coming for us. Editorial: We have a duty to offer a home to more than 750 refugees. Last updated 05:00, September 3 2015 Prime Minister John Key refuses to raise refugee quota OPINION: New Zealand cannot ignore the worldwide refugee crisis. 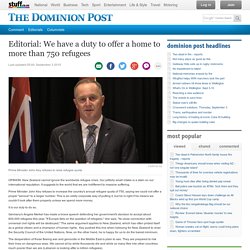 Our pitifully small intake is a stain on our international reputation. It suggests to the world that we are indifferent to massive suffering. Prime Minister John Key refuses to increase the country's annual refugee quota of 750, saying we could not offer a proper "service" to a larger number. It is our duty to do so. Germany's Angela Merkel has made a brave speech defending her government's decision to accept about 800,000 refugees this year. Shocking images of drowned Syrian boy show tragic plight of refugees. The full horror of the human tragedy unfolding on the shores of Europe was brought home on Wednesday as images of the lifeless body of a young boy – one of at least 12 Syrians who drowned attempting to reach the Greek island of Kos – encapsulated the extraordinary risks refugees are taking to reach the west. 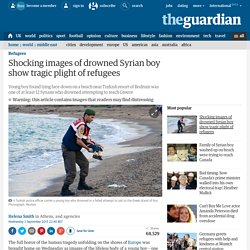 The picture, taken on Wednesday morning, depicted the dark-haired toddler, wearing a bright-red T-shirt and shorts, washed up on a beach, lying face down in the surf not far from Turkey’s fashionable resort town of Bodrum. A second image portrays a grim-faced policeman carrying the tiny body away. Within hours it had gone viral becoming the top trending picture on Twitter under the hashtag #KiyiyaVuranInsanlik (humanity washed ashore).

Turkish media identified the boy as three-year-old Aylan Kurdi and reported that his five-year-old brother had also met a similar death. Kos, facing Turkey’s Aegean coast, has become a magnet for people determined to reach Europe. Images of drowned Syrian boy show plight of refugees. Last updated 07:44, September 3 2015 A record number of migrants from many parts of the Middle East, Africa and Asia have entered Europe via Greece and Turkey this year. 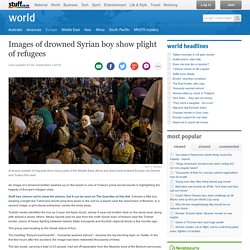 If these extraordinarily powerful images of a dead Syrian child washed up on a beach don’t change Europe’s attitude to refugees, what will? - Europe - World - The Independent. The child, who is thought to be Syrian, has drowned in an apparent attempt to flee the war ravaging his country. 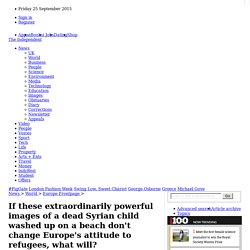 Follow the latest updates in our live blog here They are extraordinary images and serve as a stark reminder that, as European leaders increasingly try to prevent refugees from settling in the continent, more and more refugees are dying in their desperation to flee persecution and reach safety. The Independent has taken the decision to publish these images because, among the often glib words about the "ongoing migrant crisis", it is all too easy to forget the reality of the desperate situation facing many refugees. The boy, pictured below being carried by the official, is one of 12 Syrian refugees feared dead after they drowned trying to cross the Mediterranean on two boats bound for the Greek island of Kos.

According to Turkey’s Dogan news agency, three children and a woman from the small boat drowned. Hammond, the Foreign Secretary, said refugees were “marauding” around Calais. Haunting Image Of Drowned Boy Sums Up Consequences Of 'The Syrian War In One Photo' SEE ALSO: How The Graphic Image Divided Britain's Press Lying facedown on the shore of a Bodrum beach this haunting image of a drowned Syrian toddler illustrates the perilous risks, and heartbreaking consequences, of the journey tens of thousands of migrant families have undertaken, chasing a better life in countries shuffling responsibility for taking them in. 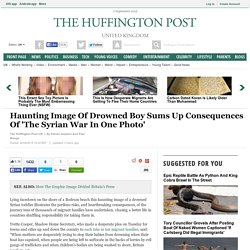 Yvette Cooper, Shadow Home Secretary, who made a desperate plea on Tuesday for towns and cities up and down the country to each take in ten migrant families, said: "When mothers are desperately trying to stop their babies from drowning when their boat has capsized, when people are being left to suffocate in the backs of lorries by evil gangs of traffickers and when children's bodies are being washed to shore, Britain needs to act. "It is heartbreaking what is happening on our continent. We cannot keep turning our backs on this. We can - and must - do more. Liberal Democrat leader Tim Farron told The Independent "enough is enough". Migrants, Immigrants or Refugees? Debunking Dehumanizing Propaganda. Michaela WhittonSeptember 1, 2015 (ANTIMEDIA) United Kingdom — DISCLAIMER: I just saw a photo taken inside a recently discovered lorry that contained 71 decomposing bodies. 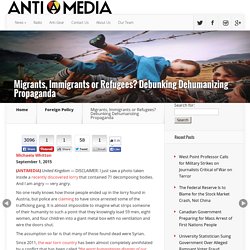 And I am angry — very angry. No one really knows how those people ended up in the lorry found in Austria, but police are claiming to have since arrested some of the trafficking gang. It is almost impossible to imagine what strips someone of their humanity to such a point that they knowingly load 59 men, eight women, and four children into a giant metal box with no ventilation and wire the doors shut. The assumption so far is that many of those found dead were Syrian. Since 2011, the war torn country has been almost completely annihilated by a conflict that has been called “the worst humanitarian disaster of our time.” A particularly grim milestone was reached in January 2014, when the U.N. announced it had stopped counting the dead due to its waning ability to verify sources and produce credible estimates.