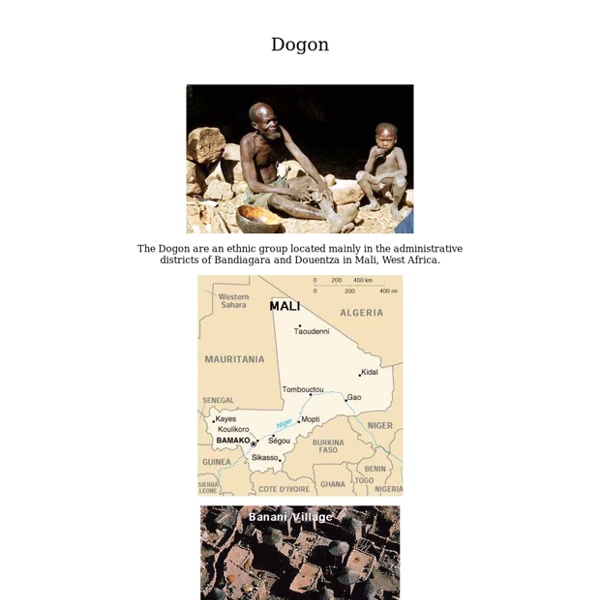 Dogon The Dogon are an ethnic group located mainly in the administrative districts of Bandiagara and Douentza in Mali, West Africa. This area is composed of three distinct topographical regions: the plain, the cliffs, and the plateau. Within these regions the Dogon population of about 300,000 is most heavily concentrated along a 200 kilometer (125 mile) stretch of escarpment called the Cliffs of Bandiagara. These sandstone cliffs run from southwest to northeast, roughly parallel to the Niger River, and attain heights up to 600 meters (2000 feet). The cliffs provide a spectacular physical setting for Dogon villages built on the sides of the escarpment. A Dogon family compound in the village of Pegue is seen from the top of the Bandiagara escarpment. Abdule Koyo, a Dogon man, stands on the top of the Bandiagara escarpment that overlooks the Bongo plains. Without any equipment but his own muscle and expertise, a Dogon man climbs hundreds of meters above the ground. The Washington Post

Star Beings Gods and Sky Spirits Pawnee Indians - aka Star People The seemingly simplistic astronomical observational tools used to observe and determine the motions of the Moon, stars, and planets would have appeared extremely sophisticated to the Pawnee Indians living on the Great Plains of Nebraska a century ago. They were skillful sky watchers. Proof of their observational activities resides in the Pawnee collection at the Chicago Field Museum of Natural History. The importance of the sky chart to their culture was considerable, important enough to be included in a sacred bundle. One major Pawnee legend deals with the origin of the sacred tribal bundle, which was guarded and protected by the tribal shaman for its magical charms. The stars and constellations were a great influence on almost every aspect of their lives, and even their houses were laid out in patterns which duplicated the patterns of the constellations, indicating the positions of their most important star gods. Apache Indians - Gahe The Hopi Indians

The Great Huangdi - China culture Huangdi was the Lord of Central Heaven; the four directions of heaven were in the charge of other lordi respectively. The Lord of Eastern Heaven Fuxi , with Goumang the god of wood as his assistant, was in charge of the spring; the Southern, Yandi, with Zhurong the god of fire, the summer; the Western, Shao Hao, with Rushou the god of gold, the autumn; the Northern, Zhuanxu, with Xuanming the god of water, the winter. Taking up residence in the central heaven, Huangdi, with his assistant Hou Tu the god of earth, was in charge of all four seasons and all the directions. Legend goes that Huangdi had four faces so that he could see the four directions at the same time. No matter what happened, no matter where it did, nothing escaped his eyes. As the supreme ruler of the kingdom of gods, he had everyone under his rule. For instance, once Gu, son of Candle Dragon the god of mountain, conspired with another god and killed a god named Bao Jiang.

Hopi mythology The Hopi maintain a complex religious and mythological tradition stretching back over centuries. However, it is difficult to definitively state what all Hopis as a group believe. Like the oral traditions of many other societies, Hopi mythology is not always told consistently and each Hopi mesa, or even each village, may have its own version of a particular story. But, "in essence the variants of the Hopi myth bear marked similarity to one another."[1] It is also not clear that those stories which are told to non-Hopis, such as anthropologists and ethnographers, represent genuine Hopi beliefs or are merely stories told to the curious while keeping safe the Hopi's more sacred doctrines. Major deities[edit] A mural depicting Tawa, the Sun Spirit and Creator in Hopi mythology. Most Hopi accounts of creation center around Tawa, the Sun Spirit. Masauwu, Skeleton Man, was the Spirit of Death, Earth God, door keeper to the Fifth World, and the Keeper of Fire. Feminist interpretations[edit]

Human Giants Walking in the footsteps of giants For most people their first giant encounter was most likely with David and Goliath, Jack and the Beanstalk, or some other bed time story. For me it was different. When I was very small, not yet five, I lay on my grandmother's lap late on a Saturday night watching Creature Features, hosted by Bob Wilkins. I am told that my great grandfather was seven feet tall or more and could grab people by their head with one hand his finger tips resting on their eyebrows his palm on the base of their skull, he would guide them as he pleased. The interesting thing is, through my life from grade school to adulthood, I have met with different people who could not believe the story of my great grandfather's size. Red-Haired Giants of Nevada Growing up in Nevada I had heard stories of the Sitecah from the Paiute Indians that lived in the area. In the 1800s this cave was known as Horse Shoe Cave but is now called Lovelock Cave.

Utsuro Bune Japanese Edo Period UFO Evidence The Iwase Bunko Depository library has in its ownership a record known as the Hyouryuukishuu translated to the ‘Tales of Castaways’. The document was printed during the late Edo period which modern fans of the paranormal understand this vessel to be the ‘Edo-period UFO’. The evidence recorded tells the tales of Japanese mariners who find themselves in unfamiliar nations after becoming lost in the ocean, as well as castaway visitors washed shorewards on the seashores of Japan. Together with these tales is the report of a damaged ship with a extremely mystifying form. In her arms, she grasped a basic timber case that looked to be of great importance to her, as she would permit nobody to approach it. Check out the video of the incident below which contains detailed information about the Utsuro Bune UFO.

Hopi Hopi The Hopi are a Native America Nation who primarily live on the 1.5 million acre Hopi Reservation in northeaster Arizona. The reservation is surrounded by the Navajo reservation. Hopis call themselves Hopitu - 'The Peaceful People'. The name Hopi is the shortened form of the title to what they called themselves, "Hopituh Sinom", "the people of Hopi". Hopis live in northeast Arizona at the southern end of the Black Mesa. Ancestry Evidence suggest that the Hopi consist of the descendants of various groups that entered the country from the north, the east, and the south, and that a series of movements covered a period of probably three centuries, and perhaps considerably longer. Their ancestors, the Anasazi, appear to have been related to the Aztecs of Mexico, and may have arrived in their current location 5 to 10 thousand years ago. Language Homes Hopi Mesa Homes Hopis live in pueblos that are made of stone and mud and stand several stories high. Women Marriage Economy Crafts Rugs Hopi Cross Rug

Cyclopean masonry The most famous examples of Cyclopean masonry are found in the walls of Mycenae and Tiryns, and the style is characteristic of Mycenaean fortifications. Similar styles of stonework are found in other cultures and the term has come to be used to describe typical stonework of this sort. The term comes from the belief of classical Greeks that only the mythical Cyclopes had the strength to move the enormous boulders that made up the walls of Mycenae and Tiryns. Pliny's Natural History reported the tradition attributed to Aristotle, that the Cyclopes were the inventors of masonry towers, giving rise to the designation Cyclopean.[1] Current definitions of Cyclopean masonry[edit] A typical stretch of Cyclopean walling (near Grave Circle A at Mycenae) Outdated definitions of the Cyclopean style[edit] Harry Thurston Peck, writing in 1898, divided Cyclopean masonry into four categories or styles:[3] Historical accounts[edit] Locations of Cyclopean structures[edit] References External links[edit]