Amnesty International Australia. The Power of People Against Poverty. Save the Children Australia. For Children. For Change. For Life. Child Sponsorship Program. Caritas Internationalis - Towards a civilization of love. The Society of St. Vincent de Paul. Médecins Sans Frontières. Core documents outlining MSF's principles are the Charter,[5] the Chantilly Principles, and the later La Mancha Agreement.[6] Governance is addressed in Section 2 of the Rules portion of this final document. 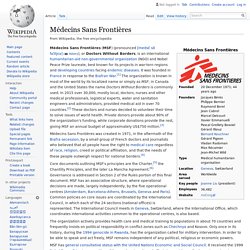 MSF has an associative structure, where operational decisions are made, largely independently, by the five operational centres (Amsterdam, Barcelona-Athens, Brussels, Geneva and Paris). Common policies on core issues are coordinated by the International Council, in which each of the 24 sections (national offices) is represented. The International Council meets in Geneva, Switzerland, where the International Office, which coordinates international activities common to the operational centres, is also based. The organization actively provides health care and medical training to populations in about 70 countries and frequently insists on political responsibility in conflict zones such as Chechnya and Kosovo. 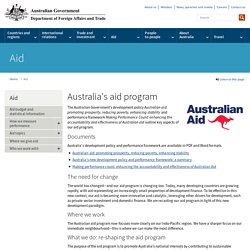 Documents Australia's development policy and performance framework are available in PDF and Word formats. The need for change The world has changed—and our aid program is changing too. Today, many developing countries are growing rapidly, with aid representing an increasingly small proportion of development finance. Where we work The Australian aid program now focuses more clearly on our Indo-Pacific region. Australian Aid. Australian Aid is the Australian Government agency responsible for managing Australia's overseas aid program. 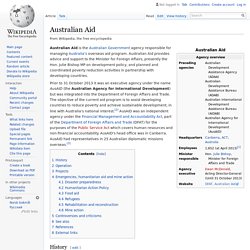 Australian Aid provides advice and support to the Minister for Foreign Affairs, presently the Hon. Julie Bishop MP on development policy, and planned and coordinated poverty reduction activities in partnership with developing countries. History[edit] The agency saw a variety of names and formats. It was founded in 1974 under the Whitlam Labor government as the Australian Development Assistance Agency (ADAA) to fulfill a role that had previously been the responsibility of several departments.

It also saw repeated cuts to aid contributions during its lifetime, as the level of 0.47% of gross domestic product during the Whitlam years was slashed to 0.33% under the Hawke and Keating governments, and has at times been even lower under the Howard government. In 2005 John Howard committed Australia to double Australian aid to about $4 billion a year by 2010. 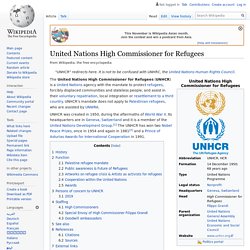 UNHCR‘s mandate does not apply to Palestinian refugees, who are assisted by UNWRA. History[edit] Office of the United Nations High Commissioner for Refugees Following the demise of the League of Nations and the formation of the United Nations the international community was acutely aware of the refugee crisis following the end of World War II. In the late 1940s, the IRO fell out of favor, but the UN agreed that a body was required to oversee global refugee issues. UNHCR's mandate was originally set out in its statute, annexed to resolution 428 (V) of the United Nations General Assembly of 1950.

Function[edit] SURFAID. The World Factbook. People from nearly every country share information with CIA, and new individuals contact us daily.