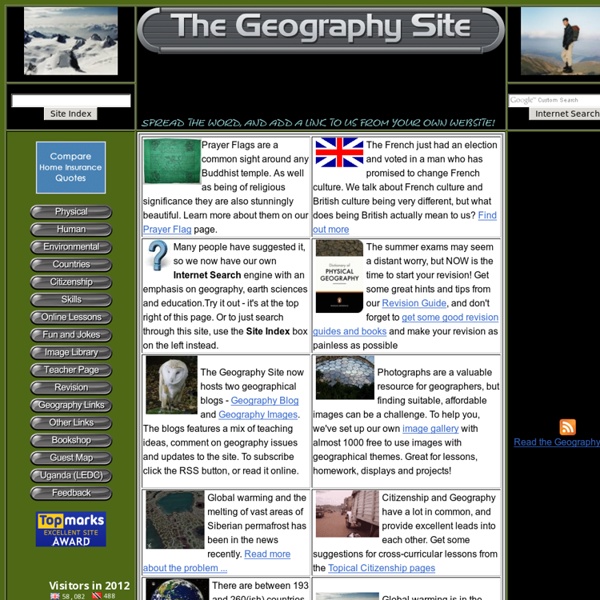 Related:  TEACHERS' TOOLSHED- Which is the best tool? (No its not Eric!) • GEOGRAPHY

Population Change Population change: the demographic transition model. Population structures at different stages of the demographic transition. CASE STUDIES of countries at different stages of the DTM Quite Good What is a glacier? A glacier is a tongue of moving ice 'flowing' from a highland area. In the past, (20,000 BP) the UK has been totally under the influence of ice. With ice sheets coming as far south as the Thames Valley. Up to 30% of the world's land surface has been covered with ice within the last 2 million years. Snowlines and snow fields

Color Landform Atlas of the United States Map users Across the US - 2005Tim Thompson's journal of his bicycle trip across the U.S. Satellite tracking of eaglesFour immature Bald Eagles are being tracked using satellites. Their positions are displayed on various kinds of maps including shaded relief maps. Visit the web site to see where they are. Home - For students and teachers - Library Guides at State Library of South Australia The State Library is the largest public research library in South Australia. It has a focus on reference material for information and research. Formats range from digital and electronic to film, sound recordings, photographic, video, microfiche, and naturally printed material. We do not loan our materials, but many of our resources are available online to assist your research. We are a free public library and welcome readers and researchers of all ages and areas of interest. The collection and preservation of material relating to South Australia and its people, is a major role of the State Library.

EU hits energy reduction target six years early Europe has met a landmark goal of slashing its energy consumption six years ahead of time, cutting greenhouse gas emissions equivalent to switching off about 400 power stations. In 2014, the EU’s 28 member countries consumed 72m tonnes of oil equivalent less than had been projected for 2020, according to a report by the EU’s science arm, the Joint Research Centre (JRC). The figure matches Finland’s annual energy use. Environmental campaigners described the achievement as “remarkable”. and “incredible” but the European commission was restrained. “Final energy consumption is currently below the 2020 target,” a spokeswoman for the commission said.

The World Factbook The Office of Public Affairs (OPA) is the single point of contact for all inquiries about the Central Intelligence Agency (CIA). We read every letter, fax, or e-mail we receive, and we will convey your comments to CIA officials outside OPA as appropriate. However, with limited staff and resources, we simply cannot respond to all who write to us. Contact Information The Australian Curriculum v7.1 History: Rationale Rationale Introduction to History History is a disciplined process of inquiry into the past that develops students’ curiosity and imagination.

Opencast coal mine application 'called in' over climate change concerns An application for an opencast coal mine in Northumberland has been “called in” by the Government on climate grounds. The proposals by Banks Mining for a surface mine for coal, sandstone and fire clay at Highthorn, between Widdrington Village and Druridge Bay, were given the green light by Northumberland county council in July. Now it will be subject to a planning inquiry after the application was called in for consideration by communities secretary Sajid Javid. The application will be examined to see if it is compatible with Government policies on meeting the challenge of climate change and protecting the natural environment, and with plans to phase coal-fired power stations in the UK by 2025. The Government made the pledge to phase out polluting coal power last December ahead of United Nations talks in Paris, which secured the world’s first comprehensive climate deal that aims to cut greenhouse gas emissions to zero this century.

Bloom's Digital Taxonomy This is the introduction to Bloom's Digital Taxonomy. The different taxonomical levels can be viewed individually via the navigation bar or below this introduction as embedded pages. This is an update to Bloom's Revised Taxonomy which attempts to account for the new behaviours and actions emerging as technology advances and becomes more ubiquitous. Bloom's Revised Taxonomy describes many traditional classroom practices, behaviours and actions, but does not account for the new processes and actions associated with Web 2.0 technologies, infowhelm (the exponential growth in information), increasing ubiquitous personal technologies or cloud computing.Bloom's Digital Taxonomy isn't about the tools or technologies rather it is about using these to facilitate learning. Outcomes on rubrics are measured by competence of use and most importantly the quality of the process or product. For example.