Latitude And Longitude Game - By KidsGeo.com 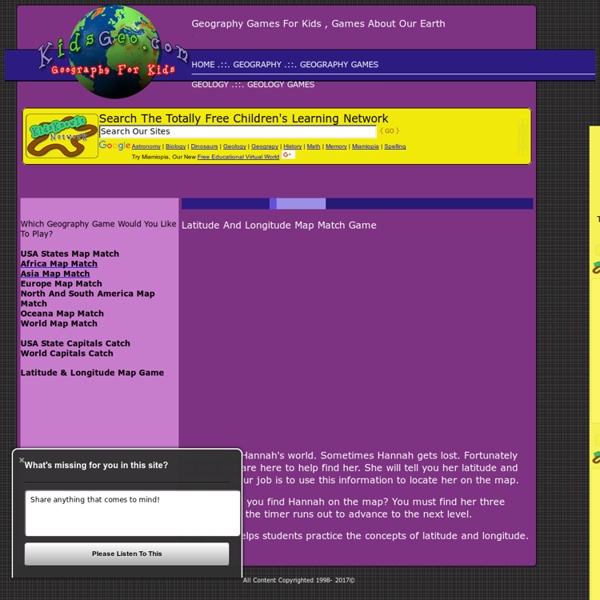 Print: What You Should Know about Christopher Columbus and the Restoration Clark B. Hinckley - 9 hours ago Though everyone knows his name, most people know surprisingly little about Christopher Columbus and the way he shaped the modern world. Fewer still appreciate the role he played in the Restoration and the opening of the last dispensation. At noon on the Ides of March, 1493, a small wooden ship rode the rising tide up the Río Tinto and into the harbor of Palos, Spain. She wasn’t much of a ship—her deck was only about 55 feet long. A crowd quickly gathered to meet the crew as they rowed to shore in a small boat. “A Man among the Gentiles” In recent decades, the story of Columbus has been largely forgotten. When I first read the Book of Mormon as a young teenager, Nephi’s prophecy about Columbus was one of the few verses that I clearly understood: Years later, as a mission president in Spain, I took all newly arriving missionaries directly from the airport or train station to the top of a large castle that overlooks Barcelona and the Mediterranean Sea. Notes 2.

Mapmaker Imagine that you are a mapmaker for the king and queen of Spain. You really want to sail across the sea to explore and chart the lands you would find there, but the king and queen value your service too much. They will not allow you to go. Many of your friends go. Some you never see again, but some come back with wonderful stories. One day, one of your friends returns with a description of the place he visited. "I can't make a map of a place I've never seen!" Click here for your friend's description of the place he visited. After you finish your map, you can click here to see an artist's map from the same description. Click on a destination below to see maps by other students. Inca Info Different Types of Maps - An Overview In geography, maps are one of the most important tools researchers, cartographers, students and others can use to examine the entire Earth or a specific part of it. What Is a Map? Simply defined, maps are pictures of the Earth's surface. They can be general reference and show landforms, political boundaries, water, the locations of cities, or in the case of thematic maps, show different but very specific topics such as the average rainfall distribution for an area or the distribution of a certain disease throughout a county. Today with the increased use of GIS, also known as Geographic Information Systems, thematic maps are growing in importance. The Different Types of Maps The following is a list of each major map type used by geographers and a description of what they are and an example of each kind. Political Map: A political map does not show any topographic features. continue reading below our video Loaded: 0% Progress: 0%

China refine 3. Aerial photography and maps – Modern mapping and surveying Aerial photography Aerial photography was one of the major developments in the history of modern mapping and surveying. Land that would have taken weeks or months to survey on the ground could be photographed in days, and photographs, once adjusted to remove distortions such as camera angles, could be turned into maps. The first aerial photograph was taken in New Zealand in 1919, when the chief instructor for the New Zealand Flying School, George Bolt, took the chief photographer of the Auckland Weekly News on a flight over Auckland. Aerial photography was first used in a survey on 27 March 1926, when the air force did a survey of the Waimakariri River in Canterbury. Photogrammetry Photogrammetry involves looking at two overlapping aerial images through a stereoscope. In 1931 Bob Crawford, a senior draughtsman with the Department of Lands and Survey, experimented with compiling a map from aerial photographs, using a technique he had read of being used overseas. Topographical maps

Electronic Passport to the Great Wall of China The Mongols were nomadic people who lived north of China. Mongol raids into China caused a great deal of destruction during the Age of Warring States. In 214BC, when Shih Haung-ti unified China and began the Ch'in Dynasty, he decided to end the Mongol threat by constructing one of the largest public works projects in history. To this day, the Great Wall of China is the longest human-made structure on earth. More than a million Chinese workers connected a number of existing defensive walls into a single system fortified by watchtowers in order to keep out the Mongols. Very little remains of the original construction, but later rulers made the wall stronger and longer. Many people believe that the Great Wall of China can be seen from the moon without a telescope, in fact, a question in the game Trivial Pursuit says as much. Download this lesson as Microsoft Word file or as an Adobe Acrobat file. Listen to this lesson.