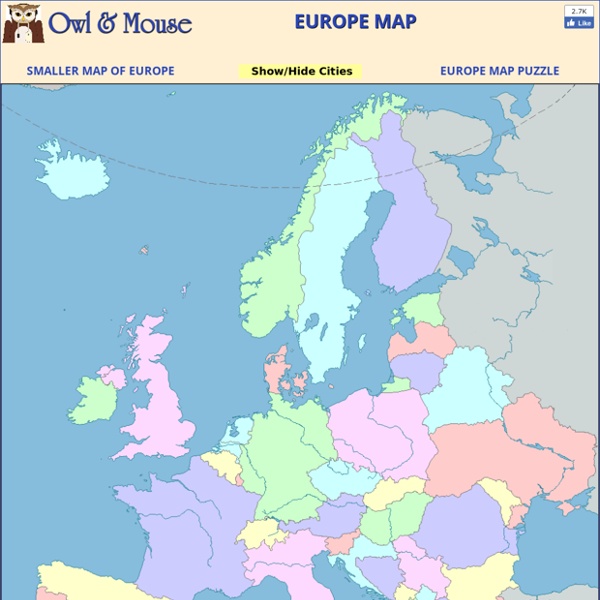 Europe is the second smallest of the inhabited continents. It is a part of the Eurasian land mass that includes Europe, Asia, Asia Minor and the Arabian Peninsula. As many large islands east and south of Asia are usually included in Asia, the Eurasian land mass extends from Iceland to New Guinea, from the Atlantic to the Pacific and from the Arctic to the Indian Oceans. Just where to divide this mass into continents has long been debated. Traditionally the Ural mountains in Russia have been used as a division. This line then had to curve back through the Caspian and Black Seas to avoid leaving Turkey in Europe.

40 more maps that explain the world Maps seemed to be everywhere in 2013, a trend I like to think we encouraged along with August's 40 maps that explain the world. Maps can be a remarkably powerful tool for understanding the world and how it works, but they show only what you ask them to. You might consider this, then, a collection of maps meant to inspire your inner map nerd. 50 Really Cool Online Tools for Science Teachers A 21st-century education revolves around the Internet for everything from collaboration, tools, lessons, and even earning degrees online. If you are looking for ways to integrate online learning into your science class or science degree programs, then take a look at these cool online tools that are just perfect for both teachers and students. Science Tools to Use with Students These tools offer opportunities for learning about climate, cells, the human body, nature, and more.

Africa Africa is divided by the Sahara Desert, which stretches west to east just below the top of the continent. While some nomadic peoples live in the desert, and others live in the occasional oasis within the Sahara, the desert is mostly a vast barrier of sand, inhospitable and forbidding. Any kind of communication across the Sahara used to be more difficult than communication around the Mediterranean.

An Interactive Earthquake Engineering Resource for Middle Grade Students Student at computer This Web site was developed to provide middle school teachers with a comprehensive, single source education tool. Connecte²d Teaching presents a unique real-life scenario in earthquake engineering design, offering students the opportunity to increase their understanding while motivating them to learn more, and to explore the fascinating world of STEM – science, technology, engineering, and mathematics. The site is divided into several interrelated sections covering a wide range of materials, with each area providing distinctive learning objectives. The Lesson Plans section contains materials that will engage students in authentic, disaster-related projects.

USA Stretching across the continent of North America, the United States goes from the Atlantic Ocean in the east to the Pacific Ocean in the west. North of Mexico and south of Canada, it has the Gulf of Mexico on its south-eastern border. The US consists in addition of two more states that are not contiguous to (not touching the other parts) the main body of the United States. Hawaii is located in the middle of the Pacific Ocean; Alaska is on the northwest coast of North America, bordering Canada. Going clear across North America, the United States has a great variety of climates and landscapes, from temperate rainforest to desert, fertile plains to icy mountains. Quill's Quiz - 1100 Question US Mega Geography Quiz

Create a topographic profile Import file (KML, KMZ, GPX) loaded layer and topographic profile of the route. Sometimes, some files do not automatically create a profile! Zoom: 15Counter markers: 2Status: OKАzimuth: 73°Mouse px: ...Lat./Lon.: ...Center point: -25.343780041796865, 131.03412500000002Center point location: Uluru Rd, Petermann NT 0872, Australia How to make a topographic profile? Asia both in land area and in population. Asia and Europe share the Eurasian land mass; and the exact border between them is in some dispute. The Asian part of the Eurasian land mass stretches from the Ural mountains east to the Pacific ocean, and from far northern Siberia in the Arctic almost to the Equator, and the islands of South East Asia far below it. (The southern-most part of Asia is shown in the South-East Asia map). In its huge area, Asia contains Mt.

20 Good Map Creation Tools for Students A couple of years ago I published a list of 21 online map creation tools. Since then some of those tools have gone offline and new tools have replaced them. Here's my updated list of online map creation tools for students and teachers. amMap: Interactive flash maps Features Main features Highly customizable – every aspect of the map can be styled using built-in configuration options or CSS.Create multi-level drill-downs.Create map charts (heatmaps or otherwise known as choropleth maps).Use any images in any format as map markers.Support for real-life latitude and longitude coordinates.Apply built-in or custom textures.Display multi-segment lines and routes.Customize initial and user-controllable zoom options.Control the map via JavaScript API (change data and configuration options, simulate user interactions, attach custom funcitonality to various events, etc.) Hundreds of maps JavaScript Maps comes with hundreds of hand-crafted maps in two detail levels – low-resolution (to conserve bandwidth) and high-resolution (for extra detail).

200 Countries, 200 Years, 4 Minutes Hans Rosling explains a very common misunderstanding about the world: That saving the poor children leads to overpopulation. Not only is it not right, it’s the other way around! The world might not be as bad as you might believe! Don’t Panic – is a one-hour long documentary produced by Wingspan Productions and broadcasted on BBC on the 7th of November 2013. The visualizations are based on original graphics and stories by Gapminder and the underlaying data-sources are listed here. Hans’s — “All time favorite graph”, is Read more …