Trump Repeats Unfounded Arguments in New Appeal for a Border Wall. President Trump has addressed the nation in prime time from the Oval Office, delivered remarks from the Rose Garden, met with Democrats in the Situation Room and traveled to the border with Mexico to make his case that the government would not reopen unless he got funding for a border wall. Thirty-five days into the shutdown, the president announced on Friday from the Rose Garden that the government would reopen until at least Feb. 15, giving Congress time to work out a deal on border security. He did not get any funding for a wall. And on Friday, he did not advance any new arguments for building one. In fact, many of the claims he made were recycled heavily from previous comments and contained many of the same misstatements and exaggerations.

Also notable was something Mr. The essence of Mr. Last year, he said, Immigrations and Customs Enforcement “removed 10,000 known or suspected gang members like MS-13 and members as bad as them.” In addition, Mr. It is possible that Mr. Mr. Falling Illegal Immigration Numbers Confirm No Border Crisis. Donald Trump stands with Border Patrol agents and others after his visit to a U.S. 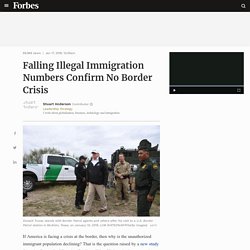 Border Patrol station in McAllen, Texas, on January 10, 2019. (JIM WATSON/AFP/Getty Images) Getty If America is facing a crisis at the border, then why is the unauthorized immigrant population declining? That is the question raised by a new study from the Center for Migration Studies of New York and other recent data. For the past several months, including in a January 8, 2019, televised address, Donald Trump has argued America faces an illegal immigration crisis. The data do not support a picture of an increasing number of unauthorized immigrants in the United States.

Table 1: Undocumented Population in the U.S.: 2010 to 2017 Source: Center for Migration Studies. The original public argument Donald Trump put forward for building a wall along the border was concern about large-scale illegal migration from Mexico. The Department of Homeland Security (DHS) has documented the trend of falling numbers as well. On the Border, Little Enthusiasm for a Wall: ‘We Have Other Problems That Need Fixing’ Here Are The Advertisers Boycotting Tucker Carlson's Show.

Anti-Semitic gunman suspect Robert Bowers accused Jews of “committing genocide to his people” Robert Bowers, the suspected gunman who is believed to have murdered 11 people in a shooting spree at a Pittsburgh synagogue, is reported to have used the white genocide libel against the Jews when explaining his motives to authorities. 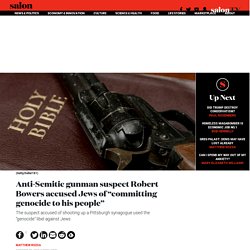 Bowers is reported to have told a SWAT officer while receiving medical care that Jews "were committing genocide to his people," according to CNN. He also reportedly told police during his shootout with law enforcement officers that "they're committing genocide to my people. Fox News’ migrant caravan coverage backfires: Panel of independent voters rejects fearmongering. When "Fox & Friends" co-host Steve Doocy asked a panel of independent voters for their thoughts on a caravan of 5,000 Central American migrants traveling through Mexico to reach the United States, he seemed surprised by their answers, which expressed sympathy for the individuals fleeing poverty, oppression and violence. 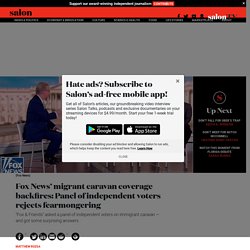 "I think uneven immigration laws are a problem for any country," one independent voter told Doocy when asked about America's immigration laws. "And I think our immigration laws need to be modernized and updated. But this country is founded on immigration. Julio Ricardo Varela : The migrant caravan forced Trump to admit he'd sacrifice economic prosperity to politically exploit racism. Get the Think newsletter. 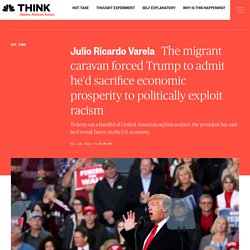 On Thursday, President Trump threatened in a series of tweets to shut down the U.S. Choice page. Stephen Miller Is an Immigration Hypocrite. I Know Because I’m His Uncle. Let me tell you a story about Stephen Miller and chain migration. 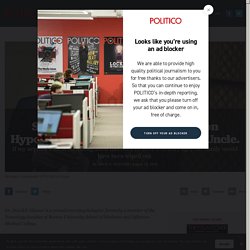 It begins at the turn of the 20th century, in a dirt-floor shack in the village of Antopol, a shtetl of subsistence farmers in what is now Belarus. Beset by violent anti-Jewish pogroms and forced childhood conscription in the Czar’s army, the patriarch of the shack, Wolf-Leib Glosser, fled a village where his forebears had lived for centuries and took his chances in America. Story Continued Below. The biggest political story no one is talking about. The decisions by Republican Reps. 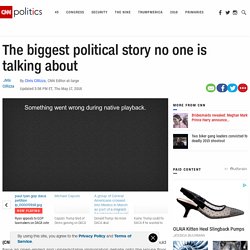 John Katko of New York and Dave Trott of Michigan to sign on to the petition came in the wake of private urgings from House Speaker Paul Ryan to his GOP colleagues not to add their names to the list. The duo's act of defiance brought the number of Republicans signed onto the effort to 20, just five short of the number they need to force votes on four competing measures aimed at preserving the Obama-era Deferred Action for Childhood Arrivals (DACA) program. Court rejects Trump administration on travel ban exemptions. President Donald Trump's travel ban policy suffered another defeat Thursday as an appeals court rejected the administration’s attempt to deny grandparents, aunts, uncles and cousins of Americans a temporary exemption from the controversial executive order. 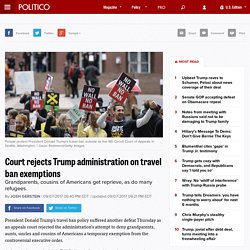 A three-judge panel of the 9th U.S. Circuit Court of Appeals unanimously declined to overturn a district court judge’s ruling that the administration was taking too narrow a view of an exception the Supreme Court carved out from the travel ban in June. Story Continued Below. 8 million people could be deported under Trump&apos;s immigration order. When President Trump ordered a vast overhaul of immigration law enforcement during his first week in office, he stripped away most restrictions on who should be deported, opening the door for roundups and detentions on a scale not seen in nearly a decade. 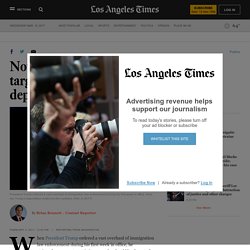 Up to 8 million people in the country illegally could be considered priorities for deportation, according to calculations by the Los Angeles Times. They were based on interviews with experts who studied the order and two internal documents that signal immigration officials are taking an expansive view of Trump’s directive. Far from targeting only “bad hombres,” as Trump has said repeatedly, his new order allows immigration agents to detain nearly anyone they come in contact with who has crossed the border illegally.

People could be booked into custody for using food stamps or if their child receives free school lunches. Also among those 11.1 million are about 8 million jobholders, Pew found. White House seeks intelligence that tells Trump what he wants to hear. Donald Trump hasn’t given up on his Muslim ban, but after failing in the courts, the president realizes his proposal needs some work. 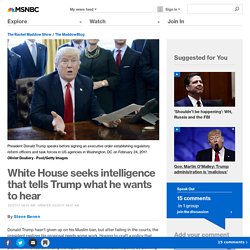 Hoping to craft a policy that can pass legal muster, the White House has moved forward in recent weeks with a plan that involves defending the legality of the administration’s policy by pointing to security risks that, in Trump’s mind, makes his proposal necessary. With that in mind, a senior White House official told CNN late last week that intelligence officials at the Department of Homeland Security “are working on an intelligence report that will demonstrate that the security threat for these seven countries is substantial and that these seven countries have all been exporters of terrorism into the United States.” Stephen Miller called U.S. Attorney about travel ban defense. In the chaotic hours after President Trump signed on a Friday afternoon the sloppily written executive order meant to fulfill his Muslim ban campaign promise, Stephen Miller called the home of Robert Capers to dictate to the U.S. 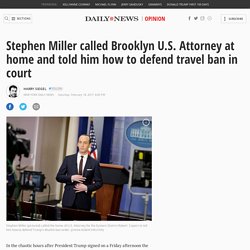 Attorney for the Eastern District how he should defend that order at a Saturday emergency federal court hearing. That’s according to a federal law enforcement official with knowledge of the call, which happened as Department of Justice attorneys cancelled plans, found babysitters and rushed back to their Brooklyn office to try and find out what exactly it was they were defending and who was being affected by it — how many people were already being held in America, how many were being barred from arriving here and the exact status of each person. Seattle judge lets Trump travel ban suit roll on. A judge in Seattle has turned down the federal government's request to put a lawsuit there on hold while an appeals court mulls further action regarding President Donald Trump's travel ban executive order.

At a hearing Monday, U.S. District Court Judge James Robart rejected the Justice Department's call for a delay and invoked Trump's own Twitter comments seeming to seek quick action in the case. Story Continued Below "I thought the president said, We'll see you in court? " Homegrown extremism is not limited to one religion. After the mass shooting at a Quebec mosque last month that left six Muslim men dead, Royal Canadian Mounted Police Commissioner Bob Paulson stressed the need to uncover what motivated accused murderer Alexandre Bissonnette “to act in the way that he did.” “There is, I think everyone would agree, a more caustic tone to the political discourse that seems to attract and agitate and radicalize people of all persuasions — particularly those who know hardly anything about it — to engage,” Paulson said, while addressing a Canadian Senate committee. Advertisement That all people, regardless of race, ethnicity, or religion, are susceptible to radicalization is the antithesis of the Trump administration’s narrow and dangerous approach to fighting terrorism.

Legal Expert Trump Erroneously Cited To Defend Muslim Ban Actually Thinks Trump Is A Threat To Democracy. The national security law expert miscited by President Donald Trump to criticize a court ruling against his administration is actually a frequent critic of the president who has called the president’s travel ban “malevolence tempered by incompetence.” Following the 9th Circuit Court of Appeal’s February 9 unanimous ruling against the Trump administration that declined to reinstate the administration’s executive order targeting people from seven majority-Muslim countries, Trump attacked the decision by citing on Twitter a Lawfare article authored by the site’s editor-in-chief, Benjamin Wittes:

The ad includes the signatures of evangelicals considered to be more conservative and represent large churches and institutions, including New York City Pastor Tim Keller and his wife, Kathy Keller, Southern Baptists Ed Stetzer and Daniel Akin and popular author Max Lucado. The ad shows how the issue of refugees, which was once not considered divisive in evangelical circles, has become polarizing in recent years. Immigrants Do Not Increase Crime, Research Shows.

Syrian Refugees Don’t Pose a Serious Security Threat. Of the 859,629 refugees admitted from 2001 onwards, only three have been convicted of planning terrorist attacks on targets outside of the United States, and none was successfully carried out. Syrian Refugees Don’t Pose a Serious Security Threat. Nonprofits told not to help Syrian refugees. Our Betrayal of Syrian and Iraqi Refugees. US religious leaders make forceful appeal to admit refugees. New Evidence Confirms Paris Terrorists Were Not Refugees, Republicans Still Lying About It Anyway. Syria crisis fast facts and overview of the refugee situation. I’m Sorry, Christian, But You Don’t Get to Make That Move. Ben Carson blames media for 'rabid dog' Syrian refugee metaphor in Mobile rally. Facebook. Obama defends American values, pushes back against GOP. Love the Refugee With the Compassion Christ Has Shown You.