A BEAUTIFUL ANIMATION OF A HARROWING STORY - BBC NEWS. Against All Odds. A Life on Hold: The story of a teenage refugee. The Arrival - Motion Graphics (Book by Shaun Tan) The Boat - An Interactive Graphic Novel. Borderland: Mexico to the US. Story 9 By Steve Inskeep We never planned to witness what we saw that day. 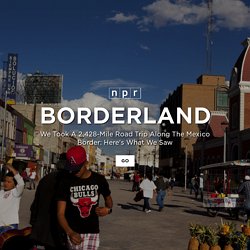 We expected to see a stretch of the United States border fence in Hidalgo, Texas. In that location it’s more of a wall than a fence — a vertical concrete slab, topped by rusted steel posts. A local resident named Scott Nicol brought us to see it. We knew from Nicol that migrants from Mexico slip illegally into that nature preserve and try to scale the wall to reach the settled area on the other side. But we didn’t expect to meet migrants. We were below the wall, looking up at the vertical concrete slab, when several Border Patrol vehicles drove past and disappeared into the woods. Carly, A Refugee's Story. 'Children are the real victims of conflict' Dadaab: Growing up in the world’s largest refugee camp. The European Refugee Crisis and Syria Explained. Go Back To Where You Came From. I'm still fuming! 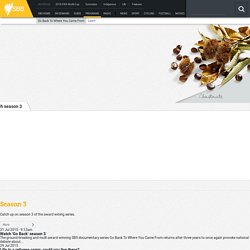 Keep hitting the return button and getting bounced! OK, now I AM calm.... The "Moderator" of this assault on our intelligence obviously has social problems it appears. The House I live in with Frank Sinatra. Inside The Syrian Refugee Camp The Size Of A Small City. Life in a Syrian refugee camp. Life through the eyes of a refugee: 500 children in Lebanon given cameras to document their plight - Middle East - World - The Independent.

A total of 500 children aged between seven and 12 years old, displaced from Syria and living as refugees in Lebanon, were given disposable cameras to document their lives.

Hard to see so many people displaced and children without a home. I bet we all wish to just fix this immensely complex issue..... – brightimmigration

Girls and boys stand together in an informal settlement in the Bekaa Valley. 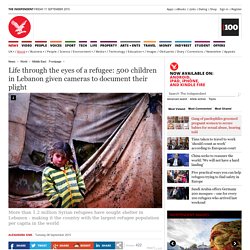 They were photographed by Nahed, 10, from Aleppo. Unicef/Zakira An expanse of makeshift shelters is visible in an informal settlement in the Tal Serhoun area of the Bekaa Valley. The scene was photographed by Moussa, 12, from Aleppo Governorate, in the Syrian Arab Republic. The project, named “Lahza 2” and supported by Unicef, aimed to offer the children a form of "psychological support and catharsis through artistic expression". Malala Yousafzai tells Syrian refugee Mazoun's story. Refugee Journey: 26/11/2013, Behind the News. We often hear stories about people coming to Australia as refugees, in search of a better life. 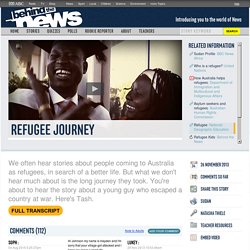 But what we don't hear much about is the long journey they took. You're about to hear the story about a young guy who escaped a country at war. Here's Tash. NATASHA THIELE, REPORTER: He has a couple of uni degrees, a loving family, a girlfriend and some tall genes. Refugees. © UNHCR/H. 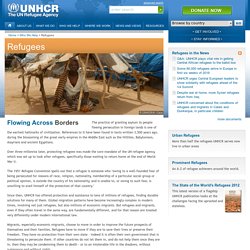 Caux. Refugee life through a child’s eyes: Young Syrians capture the laughter and heartbreak of living in a refugee camp in photos they took themselves. The incredible photos have been taken by Syrian refugee children forced to leave their country in on-going violenceChildren were given cameras by world-renowned photographer Reza Nomade as part of his Exile Voices projectThey captured life inside Kawergosk refugee camp in Erbil, northern Iraq, home to more than 10,000 Syrian refugeesBeautiful images show the children laughing, washing and playing with their toys despite their dire struggles Among the rubble is the heartbreaking picture of some frozen shoes belonging to a young girl who wanted to go to photography class - but waited until her shoes had thawed By Jay Akbar For Mailonline Published: 09:08 GMT, 30 July 2015 | Updated: 23:18 GMT, 31 July 2015 They are homeless, hungry and sometimes alone. 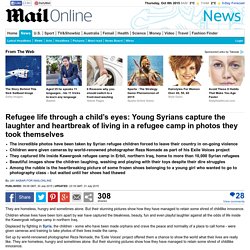 But their stunning pictures show how they have managed to retain some shred of childlike innocence. Sea Prayer: a 360 story inspired by refugee Alan Kurdi. This is a 360 film. 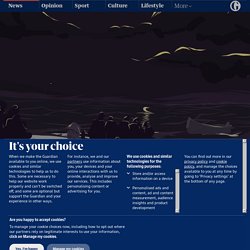 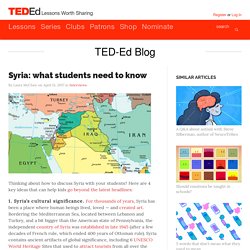 Here are 4 key ideas that can help kids go beyond the latest headlines: 1. Syria’s cultural significance. For thousands of years, Syria has been a place where human beings lived, loved — and created art. Bordering the Mediterranean Sea, located between Lebanon and Turkey, and a bit bigger than the American state of Pennsylvania, the independent country of Syria was established in late 1945 (after a few decades of French rule, which ended 400 years of Ottoman rule). 2. 3. 4.

To learn more about global forced displacement, a good place to start is the website of the UN Refugee Agency (UNHCR). This includes plenty of information and resources; including a basic explanation of the Refugee Convention and an annual report on patterns of forced displacement. The website also looks at individual stories, trying to match the statistical data with more personal accounts of displacement. To further investigate the challenges faced by those who seek to begin a journey from war to safety, the missing migrants project looks broadly at those—both migrants and refugees—who have died along migratory routes (both at land and at sea). For more detailed information, you can read this report by the International Organization for Migration. In this TED Talk, Melissa Fleming (UNHCR) tells the story of two refugees and their harrowing journey towards safety.