6 Things From History Everyone Pictures Incorrectly 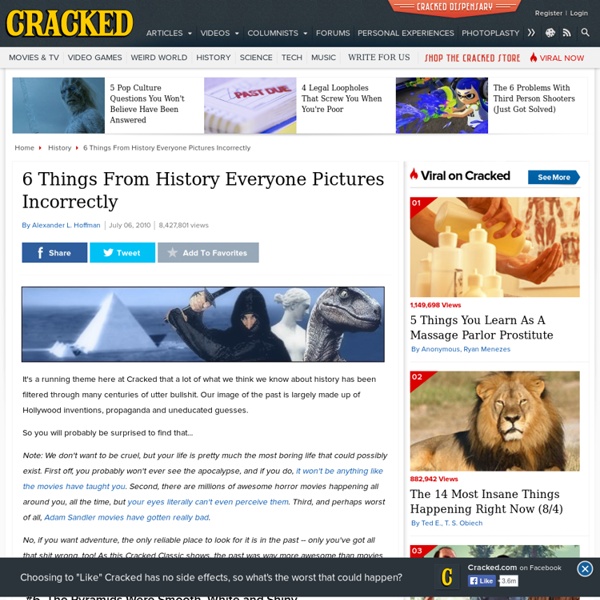 It's a running theme here at Cracked that a lot of what we think we know about history has been filtered through many centuries of utter bullshit. Our image of the past is largely made up of Hollywood inventions, propaganda and uneducated guesses. So you will probably be surprised to find that... Note: We don't want to be cruel, but your life is pretty much the most boring life that could possibly exist. No, if you want adventure, the only reliable place to look for it is in the past -- only you've got all that shit wrong, too! The Perception: We get so busy being amazed by the Pyramids, with their massive, meticulously layered sandy golden bricks, that we forget that what we're seeing are the broken-down remnants. The Reality: What we think of today as the Pyramids are really just the exposed layers of the structural base. Pharaohs liked tacky shit? And since the Pyramids were the tombs of the pharaohs, they made sure they were the biggest, most sparkly things of all.

Top 5 Funniest Fake Facebook Pages With over 250 million users, Facebook is a social networking behemoth. The site is host to thousands of celebrity fan pages and has been taking steps to make these more appealing to self-promoters. On Saturday Bill Gates revealed that he's not a Facebook user, and many other famous names are notably absent from the site. Which leads us to wonder...what might those pages look like? Fortunately, some of the web's most creative minds had the exact same thought, and below we bring you the very best fake Facebook pages. Click through to the sites to see the pages in full size and quality. 1.