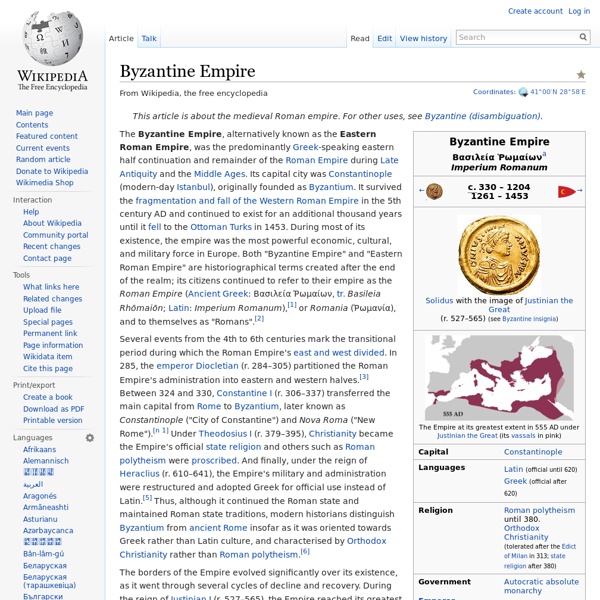 The Byzantine Empire, alternatively known as the Eastern Roman Empire, was the predominantly Greek-speaking eastern half continuation and remainder of the Roman Empire during Late Antiquity and the Middle Ages. Its capital city was Constantinople (modern-day Istanbul), originally founded as Byzantium. It survived the fragmentation and fall of the Western Roman Empire in the 5th century AD and continued to exist for an additional thousand years until it fell to the Ottoman Turks in 1453. During most of its existence, the empire was the most powerful economic, cultural, and military force in Europe. Both "Byzantine Empire" and "Eastern Roman Empire" are historiographical terms created after the end of the realm; its citizens continued to refer to their empire as the Roman Empire (Ancient Greek: Βασιλεία Ῥωμαίων, tr. Several events from the 4th to 6th centuries mark the transitional period during which the Roman Empire's east and west divided. Nomenclature[edit] History[edit]

Western Roman Empire The rise of Odoacer of the Foederati to rule over Italy in 476 was popularized by eighteenth-century historian Edward Gibbon as a demarcating event for the end of the Western Empire and is sometimes used to mark the transition from Antiquity to the Middle Ages. Background[edit] As the Roman Republic expanded, it reached a point where the central government in Rome could not effectively rule the distant provinces. Communications and transportation were especially problematic given the vast extent of the Empire. Rebellions, uprisings, and political developments[edit] Minor rebellions and uprisings were fairly common events throughout the Empire. The main enemy in the West was arguably the Germanic tribes behind the rivers Rhine and Danube. The Parthian Empire, in the East, on the other hand, was too remote and powerful to be conquered. Economic stagnation in the West[edit] Crisis of the 3rd century[edit] The organization of the Empire under the Tetrarchy. Tetrarchy[edit] Second division[edit]

Ancient Rome In its approximately 12 centuries of existence, Roman civilization shifted from a monarchy to a classical republic and then to an increasingly autocratic empire. Through conquest and assimilation, it came to dominate Southern and Western Europe, Asia Minor, North Africa, and parts of Northern and Eastern Europe. Rome was preponderant throughout the Mediterranean region and was one of the most powerful entities of the ancient world. It is often grouped into "Classical Antiquity" together with ancient Greece, and their similar cultures and societies are known as the Greco-Roman world. Ancient Roman society has contributed to modern government, law, politics, engineering, art, literature, architecture, technology, warfare, religion, language and society. By the end of the Republic, Rome had conquered the lands around the Mediterranean and beyond: its domain extended from the Atlantic to Arabia and from the mouth of the Rhine to North Africa. Founding myth Kingdom Main article: Roman Kingdom

Industrial Revolution Iron and Coal, 1855–60, by William Bell Scott illustrates the central place of coal and iron working in the industrial revolution and the heavy engineering projects they made possible. The Industrial Revolution was the transition to new manufacturing processes in the period from about 1760 to sometime between 1820 and 1840. This transition included going from hand production methods to machines, new chemical manufacturing and iron production processes, improved efficiency of water power, the increasing use of steam power, and the development of machine tools. It also included the change from wood and other bio-fuels to coal. Textiles were the dominant industry of the Industrial Revolution in terms of employment, value of output and capital invested; the textile industry was also the first to use modern production methods.[1] The Industrial Revolution marks a major turning point in history; almost every aspect of daily life was influenced in some way. Etymology Textile manufacture Chemicals

Three-age system The three-age system in archaeology and physical anthropology is the periodization of human prehistory into three consecutive time periods, named for their respective tool-making technologies: Jomon pottery, Japanese Stone Age. Origin[edit] The concept of dividing pre-historical ages into systems based on metals extends far back in European history, but the present archaeological system of the three main ages: stone, bronze and iron, originates with the Danish archaeologist Christian Jürgensen Thomsen (1788–1865), who placed the system on a more scientific basis by typological and chronological studies, at first, of tools and other artifacts present in the Museum of Northern Antiquities in Copenhagen (later the National Museum of Denmark). [edit] In his poem, Works and Days, the ancient Greek poet Hesiod possibly between 750 and 650 BC, defined five successive Ages of Man: 1. "... then Zeus the father created the third generation of mortals, the age of bronze ... and in 1822:

Prehistory Prehistory (meaning "before history", or "before knowledge acquired by investigation", from the Latin word for "before," præ, and historia) is the span of time before recorded history or the invention of writing systems. Prehistory refers to the period of human existence before the availability of those written records with which recorded history begins.[1] More broadly, it can refer to all the time preceding human existence and the invention of writing. The notion of "prehistory" began to surface during the Enlightenment in the work of antiquarians who used the word 'primitive' to describe societies that existed before written records.[2] The first use of the word prehistory in English, however, occurred in the Foreign Quarterly Review in 1836.[3] The occurrence of written materials (and so the beginning of local "historic times") varies generally to cultures classified within either the late Bronze Age or within the Iron Age. Definition[edit] Stone Age[edit] Paleolithic[edit] uninhabited

Ages of Man The Ages of Man are the stages of human existence on the Earth according to Greek mythology. Both Hesiod and Ovid offered accounts of the successive ages of humanity, which tend to progress from an original, long-gone age in which humans enjoyed a nearly divine existence to the current age of the writer, in which humans are beset by innumerable pains and evils. In the two accounts that survive from ancient Greece and Rome, this degradation of the human condition over time is indicated symbolically with metals of successively decreasing value. Hesiod's Five Ages[edit] Lucas Cranach the Elder, The Silver Age The first extant account of the successive ages of humanity comes from the Greek poet Hesiod's Works and Days (lines 109–201). Ovid's Four Ages[edit] The Roman poet Ovid (1st century BC – 1st century AD) tells a similar myth of Four Ages in Book 1.89–150 of the Metamorphoses. Ovid emphasizes the justice and peace that defined the Golden Age. Historicity of the Ages[edit] See also[edit]

London Sewers & London's Main Drainage | sub-urban.com Stonewall riots The Stonewall Inn, taken September 1969. The sign in the window reads: "We homosexuals plead with our people to please help maintain peaceful and quiet conduct on the streets of the Village—Mattachine."[1] The Stonewall riots were a series of spontaneous, violent demonstrations by members of the gay community[note 1] against a police raid that took place in the early morning hours of June 28, 1969, at the Stonewall Inn, located in the Greenwich Village neighborhood of Manhattan, New York City. Very few establishments welcomed openly gay people in the 1950s and 1960s. After the Stonewall riots, gays and lesbians in New York City faced gender, race, class, and generational obstacles to becoming a cohesive community. Background[edit] Homosexuality in 20th-century United States[edit] Throughout the 1950s and 1960s, the Federal Bureau of Investigation (FBI) and police departments kept lists of known homosexuals, their favored establishments, and friends; the U.S. Homophile activism[edit]