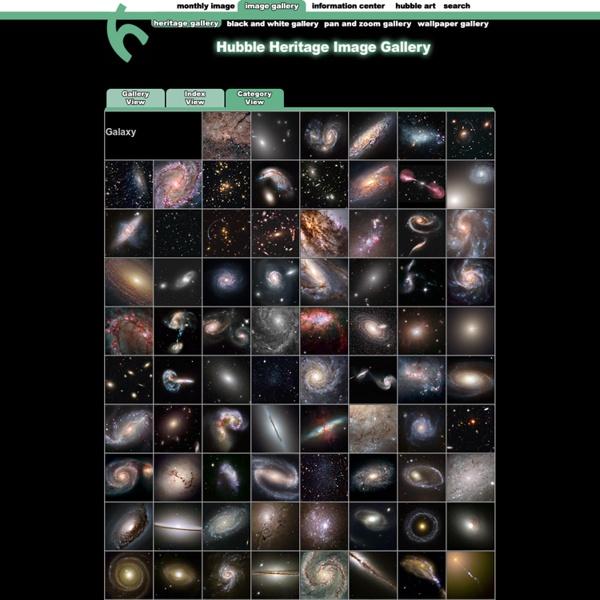 Sizes of the Universe Poster Share this infographic on your site! <a href=" src=" alt="Sizes of the Universe" width="500" border="0" /></a><br />Source: <a href=" Sleuth</a> Embed this infographic on your site! Wallpaper Videos See the universe come to life via animations, scientific visualizations, expert commentary, and more.

Daylight Hrs Explorer Shows the hours of daylight received during the year for an observer at a given latitude. This is an important factor contributing to the seasons. Running this animation on your computer... right-click to download daylighthoursexplorer.swf and daylighthoursexplorer.html to the same directory open the html file in a browser to run the animation Linking to this animation... copy and paste the code below into your webpage or blog: 11 cheap gifts guaranteed to impress science geeks Science comes up with a lot of awesome stuff, and you don't need a Ph.D, a secret lab, or government funding to get your hands on some of the coolest discoveries. We've got a list of 11 mostly affordable gifts that are guaranteed to blow your mind, whether or not you're a science geek. Click on any image to see it enlarged. 1.

Bob Gruen, Rock and Roll Photographer - The Sex Pistols Photos ©2001 Bob Gruen - No image or material on this site may be reproduced, copied or distributed in any way without written permission from Bob Gruen New comet likely to impress when it passes closest to Earth in December By Alan Pickup, The GuardianSunday, October 14, 2012 20:16 EDT A comet found recently beyond the orbit of Jupiter could well become spectacular late next year and may be a sibling of one of the most celebrated comets of all time. What is formally known as Comet C/2012 S1 (ISON) was not at first recognised as a comet when it was spotted as a 19th magnitude object using a small Russian telescope of the International Scientific Optical Network on 21 September. Earlier images have been found stretching back to last year, allowing its orbit to be calculated and showing that it is destined to sweep within 1.2 million km of the Sun’s surface at perihelion on 28 November 2013.

Solar System, Solar System Information Our Cosmic Neighborhood From our small world we have gazed upon the cosmic ocean for thousands of years. Ancient astronomers observed points of light that appeared to move among the stars. The Tunnel House Dan Havel and Dean Ruck took two condemned homes and created a trippy work of art. Unfortunately, this fluctuation in the space-time continuum was itself demolished. Earth-size planet found: Lightest exoplanet yet orbits Sun-like star Alpha Centauri B Newly found world orbits Alpha Centauri B, 4.3 light years from our SunIt is the lightest exoplanet yet found orbiting a Sun-like starIt is thought to be too hot for life, and there is likely no water presentBut presence suggests there may be other planets within the same system By Daily Mail Reporter Published: 08:18 GMT, 17 October 2012 | Updated: 12:37 GMT, 17 October 2012

Incredible Space Pics from ISS by NASA astronaut Wheelock Go Discovery! It was October 23, 2007 at 11:40am EST when I had my first ride to space on Discovery. She’s beautiful… just sad that this will be her last voyage. Looking forward to climbing aboard the flight deck when Discovery arrives at the Space Station in November. (9-23-2010). Incredible Photos from Space: Larry Tanner, NASA. Special thanks: Bethbeck’s blog

Dark alien planet discovered by NASA An alien world blacker than coal, the darkest planet known, has been discovered in the galaxy. The world in question is a giant the size of Jupiter known as TrES-2b. NASA's Kepler spacecraft detected it lurking around the yellow sun-like star GSC 03549-02811 some 750 lightyears away in the direction of the constellation Draco. The researchers found this gas giant reflects less than 1 percent of the sunlight falling on it, making it darker than any planet or moon seen up to now.