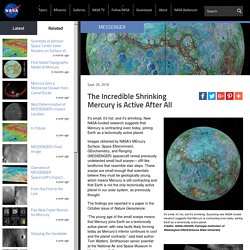 This has a discernible effect in the planet’s tenuous atmosphere and may lead to a new paradigm on how these airless bodies maintain their ethereal envelopes. The findings are to be presented at the annual Meeting of the Division of Planetary Sciences of the American Astronomical Society at National Harbor, Maryland, this week, by Apostolos Christou at the Armagh Observatory in Northern Ireland, Rosemary Killen at NASA’s Goddard Space Flight Center in Greenbelt, Maryland, and Matthew Burger of Morgan State University in Baltimore, working at Goddard.

The 1995 Hubble photo that changed astronomy. Tmelapse at Mauna Kea observatory - GIF on Imgur. Milky Way. Zoom to the Moon. Why You Should Put YOUR MASK On First (My Brain Without Oxygen) - Smarter Every Day 157. Elliptical orbits of the planets. Temperatures from absolute cold to absolute hot. Jupiter. Rosetta comet probe given termination date. Image copyright ESA The Rosetta probe will be crash-landed on Comet 67P on Friday 30 September, the European Space Agency has confirmed. 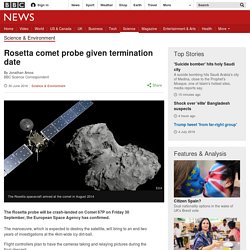 The manoeuvre, which is expected to destroy the satellite, will bring to an end two years of investigations at the 4km-wide icy dirt-ball. Flight controllers plan to have the cameras taking and relaying pictures during the final descent. Sensors that "sniff" the chemical environment will also be switched on. All other instruments will likely be off. 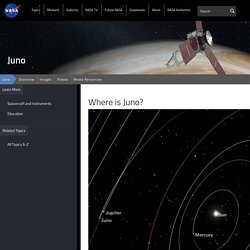 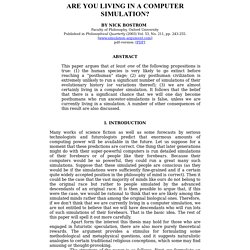 Let us suppose for a moment that these predictions are correct. One thing that later generations might do with their super-powerful computers is run detailed simulations of their forebears or of people like their forebears. Earth Rotation. Moon Despina casts it's shadow on Neptune. Is the Solar System Really a Vortex? - Universe TodayUniverse Today. The short answer? 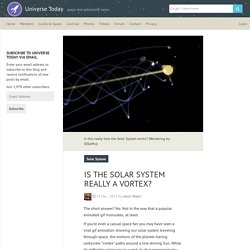 No. Not in the way that a popular animated gif insinuates, at least. If you’re even a casual space fan you may have seen a viral gif animation showing our solar system traveling through space, the motions of the planets tracing corkscrew “vortex” paths around a line-driving Sun. Solar system's Ecliptic vs Galactic Plane.