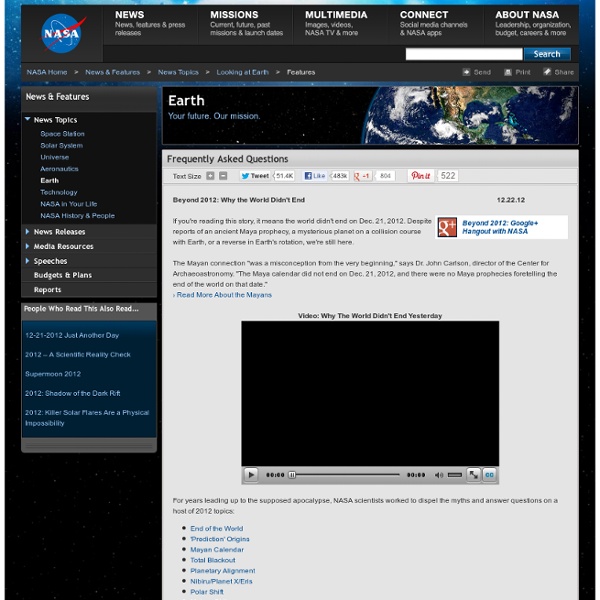 Beyond 2012: Why the World Didn't End If you're reading this story, it means the world didn't end on Dec. 21, 2012. Despite reports of an ancient Maya prophecy, a mysterious planet on a collision course with Earth, or a reverse in Earth's rotation, we're still here. The Mayan connection "was a misconception from the very beginning," says Dr. Video: Why The World Didn't End Yesterday For years leading up to the supposed apocalypse, NASA scientists worked to dispel the myths and answer questions on a host of 2012 topics: Question (Q): Are there any threats to the Earth in 2012? Answer (A):The world will not end in 2012. Q: What is the origin of the prediction that the world will end in 2012? A: The story started with claims that Nibiru, a supposed planet discovered by the Sumerians, is headed toward Earth. Q: Does the Mayan calendar end in December 2012? Video: NASA Scientist David Morrison Debunks the Myths Q: Is NASA predicting a "total blackout" of Earth on Dec. 23 to Dec. 25? Related:  Space

50 Years of Incredible Space Images From the European Southern Observatory | Wired Science This week marks the 50th anniversary of one of the world’s leading astronomical institutions, the European Southern Observatory. In honor of ESO’s birthday, we take a look at some of its most stunning shots of the night sky, amazing objects in space, and the organization's beautiful telescope facilities. ESO started when astronomers from five European countries – Belgium, France, Germany, the Netherlands, and Sweden – came together on Oct. 5, 1962 to build a telescope in the Southern Hemisphere. Having a large telescope south of the equator gave these member states access to unprecedented clear skies and celestial objects that simply can’t be seen from the Northern Hemisphere, such as the Magellanic Clouds. Over the decades, many more countries have joined, including Denmark, Switzerland, Italy, Portugal, the United Kingdom, Finland, Spain, the Czech Republic, Austria, and, in 2010, Brazil, which became the first non-European state to join. Above: Image: ESO/J.

Mock Mars Mission Crew Prepares to 'Land' on Red Planet | Space Travel & Spaceflight Simulation, Planet Mars A 520-day mock mission to Mars is nearing its halfway point, with its crew of volunteers preparing for a simulated "landing" on the Red Planet next month. The Mars500 mission — a joint experiment by Russia, the European Space Agency and China — "launched" last June, and its six crewmembers have now spent more than 230 days locked in a windowless spaceship simulator in Moscow. The six men are due to "land" on Mars on Feb. 12, according to a Jan. 21 report by the Associated Press. The crewmembers will spend two days pretending to explore the planet's surface, and then they'll head back to Earth. All in all, their confinement should last more than 500 days, officials have said — hence the mission's name. Mars500 managers have announced that the crewmembers — three Russian men, two European men and one Chinese man — are holding up well so far, the Associated Press reported. The crewmembers are each being paid about $97,000 to participate in the mission, the AP reports.

Drunvalo Melchizedek: What Will Happen During The Shift | in5d.com | Esoteric, Spiritual and Metaphysica Last updated on January 30, 2010 at 9:00 am EDT by in5d Alternative News * Visit in5D Connection where you can find your soul mate or join one of our amazing groups. EVERYONE is welcome! From a Lecture by Drunvalo Melchizedek of the Flower of Life Workshop What's Going to Happen in the Near Future What usually happens is that when we approach this point in the precession where this change takes place, everything begins to break down - all the social structures,etc begin to dissolve and break down. The Collapse of the Magnetic Field Imagine a planet where you are at a point on the precession where things are starting to get out of balance. Morphological Grid Interactions Every time one person plugs into the consciousness grid, they increase the signal from the grid. The Final Time of Axis Shift and Dimensional Interface Hopefully it won't really get crazy out there - if it does, that is where the idea of Armageddon comes in. There is another phenomenon that will probably happen. The Other Side

Edit addon - the add-on r. 1 by domisisi - Add-on Builder The Add-on Builder was a web-based development environment that allowed developers to create add-ons using the SDK APIs, but without needing to use the cfx command line tool. It was retired on April 1, 2014, and the "builder.addons.mozilla.org" domain now redirects to this page. If you have only used the SDK through the Builder, you already know most of what you need to know to develop using just the SDK. The high-level and low-level APIs used for Builder add-ons are exactly the same for Builder and SDK. To switch to the SDK: install the SDK locally get to know the cfx command line tool, with this introductory walkthrough and the detailed cfx reference get to know the package.json file used to configure attributes of your add-on

Texas Astronomers "Weigh" Heaviest Known Black Hole in our Cosmic Neighborhood Jan. 12, 2011 Seattle — Astronomers led by Karl Gebhardt of The University of Texas at Austin have measured the most massive known black hole in our cosmic neighborhood by combining data from a giant telescope in Hawai'i and a smaller telescope in Texas. The result is an ironclad mass of 6.6 billion suns for the black hole in the giant elliptical galaxy M87. Artist's concept of what a future telescope might see in looking at the black hole at the heart of the galaxy M87. The results will be presented in a news conference today at the 217th meeting of the American Astronomical Society in Seattle. Gebhardt, the Herman and Joan Suit Professor of Astrophysics, led a team of researchers using the 8-meter Gemini North telescope in Hawai'i to probe the motions of stars around the black hole in the center of the massive galaxy M87. University of Texas at Austin graduate student Jeremy Murphy has used the Harlan J. "How do you make a galaxy? Background:

ALL ABOUT 2012 13-Baktun Cycle Wave Harmonic of History : A splendid colour version of Arguelles' diagram of the 260 Katuns of the Great Cycle, combined with all events of History (since records began). 13 PIK The Mayan Perspective on 2012 13 Year Countdown to 2012 : Aluna Joy Yaxk'in gives astrological predictions for each of the 20 years of the last katun of the Great Cycle 2.0.1.3. : A message from our future selves. 2012 Unlimited : An Australian site covering Earth changes, Mayan Calendar, frequency rise, UFOs, dimensional shift, etc. 2012, Comet Lee and the Birth of Our New Neighbour : Howard Middleton Jones says there is a new planet forming near the sun which will be part of a planetary alignment in 2012. 21 December 2012 The Mayan Calendar End-Date : “Information Made Easy for the Everyday Earthling to Understand” A Millennium Prayer For The End Days - Aligning With The Maya Calendar End date 2012 : Dwayne Rourke's recipe of preparation is a Mayan rite of the 4 Directions Apollonius 2012 - Eschaton

Yahoo! Deutschland DeepAstronomy.com British Geological Survey: Magnetic reversal may now be in progress From: evolutionaryleaps.com According to the British Geological Survey (BGS), we could now be headed into a magnetic reversal, thus validating the premise of both Not by Fire but by Ice and Magnetic Reversals and Evolutionary Leaps. The South Atlantic Anomaly is growing and spreading westwards from South Africa as the Earth’s internal magnetic field rapidly weakens in this region, says this article on the BGS website. "This may be early evidence of a forthcoming reversal in the direction of the Earth’s internal magnetic field." "We do not know in detail precisely what occurs during such reversals, including the changes observed in the magnetic field and the time a reversal takes to complete," the BGS adds. Since so little is known, and in order to determine where radiation risks may be increased and how the atmosphere might respond, the BGS is opening a South Atlantic Anomaly and South Georgia Magnetic Observatory. What is the South Atlantic Anomaly? Link to BGS story: bgs.ac.uk

Andromeda Council Google © 2021 - Privacy - Terms collect space space history and space artifacts news Long before the first Instagram from space, the first check-in from orbit, or even the first astronaut's tweet, John Glenn sent an email to Bill Clinton. The reply it prompted was the very first email transmitted by a sitting U.S. president — it just happened to be to space. April 18, 2014SpaceX launches science-packed Dragon capsule on space station supply run A commercial cargo spacecraft loaded with more than two tons of scientific experiments and equipment lifted off for the International Space Station on April 18, after more than a month of delays. April 17, 2014John Houbolt, NASA engineer who fought for Apollo moon landing method, dies Were it not for John C. April 14, 2014NASA signs over historic Launch Pad 39A to SpaceX One of NASA's most historic launch pads is now under new management. April 9, 2014Houston, we've got an auction: Apollo 13 astronaut's mementos to be sold April 7, 2014Mercury space capsule shipping overseas for German art exhibition

The Top 5 Astronomical Events to Witness Before You Die | Fun Lists - Top 10 Lists In the age of internet, television, and Lady Gaga, it’s easy to ignore the dazzling displays the sky gives us every night. In ancient times, however, human civilizations based their entire calendar, and thus their way of life, upon what they saw in the cosmos. While humanity’s interest in astronomy has diminished over the centuries, the sky remains nonetheless spectacular. Few people have the time to go stargazing every night, but here are 5 celestial events so awe-inspiring, everyone must see them in their lifetime. 5. Perseid Meteor Shower Next Occurrence: August 9-14, 2011 Every August, the night sky lights up with a dazzling display known as the Perseid meteor shower. 4. Next Occurrence: June 15, 2011 in Africa Ever get bored with the predictably drab hue of the moon? 3. Occurrence: Year round More commonly known as the Northern Lights, Aurora is a fantastic light display that occurs at extreme Northern or Southern latitudes. 2. 1. Top 10 Amazing Stars in the Universe (toptenz.net)