Are You Living in a Simulation? 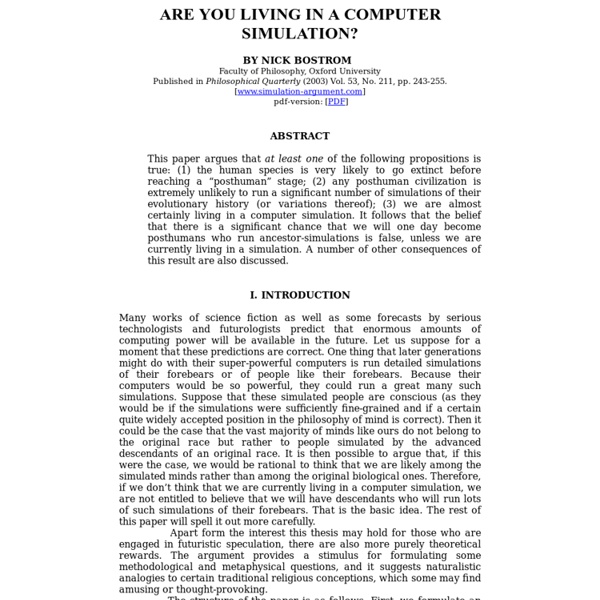 Many works of science fiction as well as some forecasts by serious technologists and futurologists predict that enormous amounts of computing power will be available in the future. Let us suppose for a moment that these predictions are correct. One thing that later generations might do with their super-powerful computers is run detailed simulations of their forebears or of people like their forebears. Because their computers would be so powerful, they could run a great many such simulations. Suppose that these simulated people are conscious (as they would be if the simulations were sufficiently fine-grained and if a certain quite widely accepted position in the philosophy of mind is correct). Then it could be the case that the vast majority of minds like ours do not belong to the original race but rather to people simulated by the advanced descendants of an original race. The structure of the paper is as follows. Memory seems to be a no more stringent constraint than processing power.

The Fermi Paradox: Back with a vengeance This article is partly adapted from my TransVision 2007 presentation, “Whither ET? What the failing search for extraterrestrial intelligence tells us about humanity's future.” The Fermi Paradox is alive and well. As our sciences mature, and as the search for extraterrestrial intelligence continues to fail, the Great Silence becomes louder than ever. The seemingly empty cosmos is screaming out to us that something is askew. Ragged Trousered Philosopher I met god the other day. I know what you're thinking. How the hell did you know it was god? Well, I'll explain as we go along, but basically he convinced me by having all, and I do mean ALL, the answers. 101 things you never knew you could do with Matroska < WALLS OF TL;DR Today on the Fluffy Channel: magic tricks with the Matroska container. Namely, editions, file linking and ordered chapters. (Warning: very large amounts of techobabble walls of text ahead.)

The myth of the starship (NB: As starships do not in fact exist, no starships were harmed in the production of this essay. Also, this is just words. If they upset you, go lie down in a dark room for half an hour then drink a glass of water; you'll feel better.) Actually, I tell a lie. The Relativity of Wrong by Isaac Asimov by Isaac Asimov I received a letter from a reader the other day. It was handwritten in crabbed penmanship so that it was very difficult to read. Iocaine Powder Explained They were both poisoned. Iocaine Powder is a heuristically designed compilation of strategies and meta-strategies which took first place in Darse Billings' excellent First International RoShamBo Programming Competition. You may use its source code freely; I ask only that you give me credit for any derived works. I attempt here to explain how it works. Meta-Strategy RoShamBo strategies attempt to predict what the opponent will do.

How Much Longer Before Our First AI Catastrophe? As I distinctly recall, some speculated that the Stock Market crash of 1987, was due to high frequency trading by computers, and mindful of this possibility, I think regulators passed laws to prevent computers from trading in that specific pattern again. I remember something vague about about "throttles" being installed in the trading software that kick in whenever they see a sudden, global spike in the area in which they are trading. These throttles where supposed to slow down trading to a point where human operators could see what was happening and judge whether there was an unintentional feedback loop happening. This was 1987. Foreknowledge and Free Will  Suppose it were known, by someone else, what you are going to choose to do tomorrow. Wouldn’t that entail that tomorrow you must do what it was known in advance that you would do? In spite of your deliberating and planning, in the end, all is futile: you must choose exactly as it was earlier known that you would. The supposed exercise of your free will is ultimately an illusion. Historically, the tension between foreknowledge and the exercise of free will was addressed in a religious context.