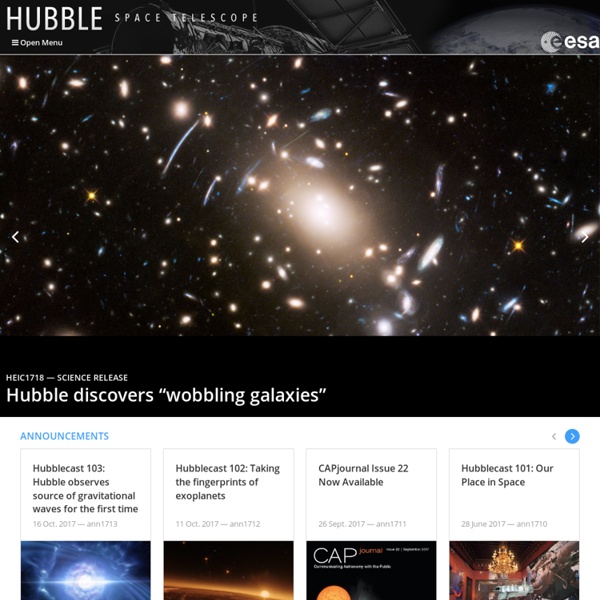 Beyond 2012: Why the World Didn't End Beyond 2012: Why the World Didn't End If you're reading this story, it means the world didn't end on Dec. 21, 2012. Despite reports of an ancient Maya prophecy, a mysterious planet on a collision course with Earth, or a reverse in Earth's rotation, we're still here. The Mayan connection "was a misconception from the very beginning," says Dr. Science Matters Yah, I know some of us are winding down from schooling for the summer months, but I can’t help but stay on the lookout for resources I know I’m going to be needing again all too soon. I’ve come across some interesting science things of late that I want to check out – perhaps you, too, can find something useful. For your perusal: Free Online Textbooks and Curriculum Chemistry Packets: 13 units of chemistry; also has links to YouTube chemistry videos

Planets Align: Panerai Jupiterium - WatchWow Making its appearance for the first time in Singapore from 13 December to 14 February 2014 is the Panerai Jupiterium. This device is a planetarium-clock showing the position of the sun, moon and Jupiter with its four satellites, from the viewpoint of an observer from Earth. Specially created as a tribute to Galileo Galilei when he first spotted Jupiter’s four satellites in 1610, watch aficionados can appreciate real time movement of the planetarium-clock which reveals the actual positions of Jupiter. Above: The four satellites around Jupiter are represented by rotating orbs

Astrophysics Astrophysics People have gazed at the stars, given them names, and observed their changes for thousands of years. NASA joined the ancient pursuit of knowledge of our universe comparatively recently. 50 Years of Incredible Space Images From the European Southern Observatory This week marks the 50th anniversary of one of the world’s leading astronomical institutions, the European Southern Observatory. In honor of ESO’s birthday, we take a look at some of its most stunning shots of the night sky, amazing objects in space, and the organization's beautiful telescope facilities. ESO started when astronomers from five European countries – Belgium, France, Germany, the Netherlands, and Sweden – came together on Oct. 5, 1962 to build a telescope in the Southern Hemisphere. Having a large telescope south of the equator gave these member states access to unprecedented clear skies and celestial objects that simply can’t be seen from the Northern Hemisphere, such as the Magellanic Clouds.

Universities with the Best Free Online Courses Free online courses are offered by real schools. Learn which courses are available, what topics they cover and which ones lead to real college credit. Online Courses for Credit Alcyone (star) Coordinates: 03h 47m 29.0765s, +24° 06′ 18.494″ The main star, known as Alcyone A, is a blue-white B-type giant similar to many of the other B-type stars in the Pleiades cluster.

The Sounds of Pulsars A pulsar is a highly magnetised neutron star, with a radius of 10-15 km, having somewhat greater mass than the Sun which has a radius of approximately 1 million km. Radiation is beamed out along the magnetic poles and pulses of radiation are received as the beam crosses the Earth, in the same manner as the beam from a lighthouse causes flashes. Being enormous cosmic flywheels with a tick attached, they make some of the best clocks known to mankind. These sounds directly correspond to the radio-waves emitted by the brightest pulsars in the sky as received by some of the largest radio telescopes in the world. To listen to the pulses of a radio pulsar, click on its arrow icon.

Great Attractor Panoramic view of the entire near-infrared sky. The location of the Great Attractor is shown following the long blue arrow at bottom-right. The Hubble Telescope turned its lens to the region of the sky where the Great Attractor is located. Universe Today — Space and astronomy news The Falcon 9 and Dragon capsule stand ready for launch prior to the detection of a helium leak in one of the engines forcing a scrub of the launch attempt on April 14. 2014 – now reset to April 18, 2014. Credit: nasatech.net NASA and SpaceX are marching forward towards a Friday, April 18 liftoff attempt for the Falcon 9 rocket sending a commercial Dragon cargo craft on the company’s third resupply mission to the International Space Station following the scrubbed launch attempt on Monday, April 14 – forced by the discovery of a Helium gas leak inside the rocket during the latter stages of the countdown.