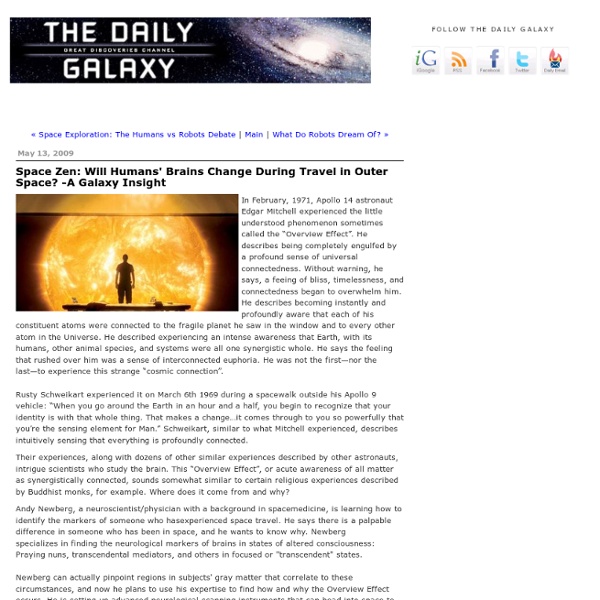 In February, 1971, Apollo 14 astronaut Edgar Mitchell experienced the little understood phenomenon sometimes called the “Overview Effect”. He describes being completely engulfed by a profound sense of universal connectedness. Without warning, he says, a feeing of bliss, timelessness, and connectedness began to overwhelm him. Rusty Schweikart experienced it on March 6th 1969 during a spacewalk outside his Apollo 9 vehicle: “When you go around the Earth in an hour and a half, you begin to recognize that your identity is with that whole thing. Their experiences, along with dozens of other similar experiences described by other astronauts, intrigue scientists who study the brain. Andy Newberg, a neuroscientist/physician with a background in spacemedicine, is learning how to identify the markers of someone who hasexperienced space travel. Newberg's first test subject will not be an astronaut, but rather a civilian. “We had not had, in science, a definition of consciousness.

Rebirth Where do we come from and where are we going? There are three possible answers to this question. Those who believe in a god or gods usually claim that before an individual is created, he does not exist, then he comes into being through the will of a god. How does the mind go from one body to another? Think of it being like radio waves. Is one always reborn as a human being? No, there are several realms into which one can be reborn. What decides where will be reborn? The most important factor, but not the only one, influencing where we will be reborn and what sort of life we shall have, is kamma. So we are not determined by our kamma. Of course we can. You have talked a lot about rebirth but is there any proof that we are reborn when we die? Not only is there scientific evidence to support the Buddhist belief in rebirth, it is the only after-life theory that has any evidence to support it. Some people might say that the supposed ability to remember former lives is the work of devils. Yes.

Scientist proves that humans are psychic There's a reason why most people don't consider parapsychology a real science: the methods are usually suspect and the results are usually crazy. But a leading social journal is publishing a paper proving that people can predict the future, and this time, the research is solid. Precognition is the ability to accurately predict future events without having any information about those events, and it's impossible. If it weren't impossible, it would mean that there was some kind of totally bizarre violation of the rules of time and space going on. Despite the inclination of the rest of the universe to behave itself, one psychologist has been able to provide experimental evidence that humans are actually capable of precognition. Over the past eight years, Daryl Bem of Cornell University conducted a series of well-established psychological experiments on some 1,000 college students. What Bem did next was to run the same experiment backwards. As far as just what, exactly, is going on...

Buddhism -- The Four Noble Truths -- 4 Truths The Spontaneous Creation of New Information: An Interview with James Kent about his new book, Psychedelic Information Theory | h+ Magazine R.U. Sirius November 14, 2010 Psychedelic drugs hold a strange position within the enhancement community. One thing is for certain. In Psychedelic Information Theory: Shamanism in the Age of Reason, James Kent incorporates the most up-to-date scientific explorations into what’s going on in psychoactivity with his own clearheaded thinking and comes up with a novel theory that — in the words of his book promo — “quantifies the limits of expanded consciousness and describes the methods by which psychedelics alter consciousness, create new information, and affect human culture.” Kent, a regular H+ contributor, offered us the opportunity to reprint segments from his own “Informal Discussion of Topics” page [ ] or to interview him… so I did a little bit of both. Here are the results. What is Psychedelic Information Theory? JAMES KENT: The general theory underlying all of PIT is that psychedelics create information when introduced to human neural and social networks. See Also

Buddhist flower that blooms once every 3000 years discovered under nun's washing machine // Current To Our Faithful Current.com Users: Current's run has ended after eight exciting years on air and online. The Current TV staff has appreciated your interest, support, participation and unflagging loyalty over the years. Your contributions helped make Current.com a vibrant place for discussing thousands of interesting stories, and your continued viewership motivated us to keep innovating and find new ways to reflect the voice of the people. We now welcome the on-air and digital presence of Al Jazeera America, a new news network committed to reporting on and investigating real stories affecting the lives of everyday Americans in every corner of the country. Thank you for inspiring and challenging us. – The Current TV Staff

Zen, Buddhism, and Personality Zen, Buddhism, and Personality Buddhism began in India in 6th century BC. Arose out of a dissatisfaction with the Hindu tradition Based upon the Teachings of Siddhartha Gautama, the Buddha Buddha = One who is awake, one who has achieved full humanness Siddartha was not the first Buddha, nor the last. The Buddha is not a god or divinity, but a man who has developed into a completely mature individual. Every person possesses the 'Buddha-nature' Everyone is capable of developing into a Buddha Siddartha Buddha An Indian prince from Nepal born in 563 BC. Lived a life of luxury for many years. Made journey's away from castle : Saw an Old Man, bent from life's work Saw a man afflicted with serious illness Watched a corpse in a funeral possession Based on his travels, Siddartha realized that sickness, old age, and death are unavoidable. Left his family and wealth to seek the answer through mental and physical discipline, practicing Yoga with several Gurus Siddartha's discovery of Buddhism Zen Buddhism in Japan

101 Zen Stories Soyen Shaku, the first Zen teacher to come to America, said: "My heart burns like fire but my eyes are as cold as dead ashes." He made the following rules which he practiced every day of his life. In the morning before dressing, light incense and meditate. Retire at a regular hour. Partake of food at regular intervals. Alan Watts The greater part of human activity is designed to make permanent those experiences and joys which are only lovable because they are changing. Alan Wilson Watts (6 January 1915 – 16 November 1973) was an English philosopher, writer, speaker, and expert in comparative religion. Quotes[edit] I have suggested that behind almost all myth lies the mono-plot of the game of hide-and-seek. What you are basically, deep, deep down, far, far in, is simply the fabric and structure of existence itself. I am amazed that Congressmen can pass a bill imposing severe penalties on anyone who burns the American flag, whereas they are responsible for burning that for which the flag stands. The Wisdom of Insecurity (1951)[edit] There is no formula for generating the authentic warmth of love.

Zen@MetaLab please direct any complaints about this site's content to the webmaster established by ben walter updated march 12, 1999 by adam fuller Lightning flashes, Sparks shower, In one blink of your eyes, You have missed seeing. If you've wandered here wanting to know what Zen is, then more than likely you will come away disappointed. This is a question that is easily asked but not easily answered. A Hindu story tells of a fish who asked of another fish: "I have always heard about the sea, but what is it? This page on Zen was created while I was searching for a home for an on-line version of The Gateless Gate, a famous collection of koans (a koan is a short story, often a dialog between a student and a teacher, that points towards some essence of the spirit of Zen). Ben Walter, July 6th 1995 The Gateless Gate: "The great path has no gates, Thousands of roads enter it. The Ten Bulls: "The 10 Bulls is more than poetry, more than pictures. Frequently Asked Questions from alt.zen: Still Point: Daily Zen: