The Curiosity robot confirms methane in Mars' atmosphere which may hint that existed life. The tunable laser spectrometer in the SAM (Sample Analysis at Mars) instrument of the Curiosity robot has unequivocally detected an episodic increase in the concentration of methane in Mars' atmosphere after an exhaustive analysis of data obtained during 605 soles or Martian days. 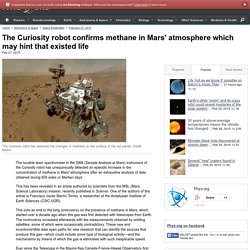 This has been revealed in an article authored by scientists from the MSL (Mars Science Laboratory) mission, recently published in Science. One of the authors of this article is Francisco Javier Martín-Torres, a researcher at the Andalusian Institute of Earth Sciences (CSIC-UGR). This puts an end to the long controversy on the presence of methane in Mars, which started over a decade ago when this gas was first detected with telescopes from Earth.

The controversy increased afterwards with the measurements obtained by orbiting satellites, some of which were occasionally contradictory. Methane in Mars These observations appeared to be contradictory. Martian seasons. On Giant Blue Alien Planet, It Rains Molten Glass. There's a "blue marble" alien planet just 63 light-years from Earth, but the world is anything but friendly to life. 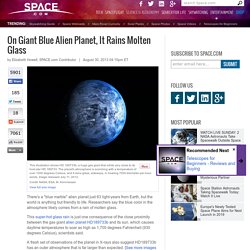 Researchers say the blue color in the atmosphere likely comes from a rain of molten glass. This super-hot glass rain is just one consequence of the close proximity between the gas giant alien planet HD189733b and its sun. which causes daytime temperatures to soar as high as 1,700 degrees Fahrenheit (930 degrees Celsius), scientists said. A fresh set of observations of the planet in X-rays also suggest HD189733b has an outer atmosphere that is far larger than expected.

[See more images of the blue alien planet HD 189733b] These surprise finds are all signals that so-called hot Jupiter alien planets are worthy of study on their own, even though they are hostile planets to life, researchers said. Rewriting planetary formation Hot Jupiters are large, roughly Jupiter-sized planets that become very hot by circling tight around their stars.

Boiling atmosphere. Life 'not as we know it' possible on Saturn's moon Titan. A new type of methane-based, oxygen-free life form that can metabolize and reproduce similar to life on Earth has been modeled by a team of Cornell University researchers. 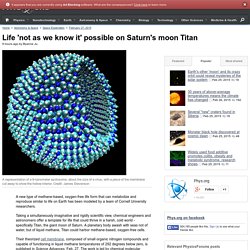 Taking a simultaneously imaginative and rigidly scientific view, chemical engineers and astronomers offer a template for life that could thrive in a harsh, cold world - specifically Titan, the giant moon of Saturn. A planetary body awash with seas not of water, but of liquid methane, Titan could harbor methane-based, oxygen-free cells. Their theorized cell membrane, composed of small organic nitrogen compounds and capable of functioning in liquid methane temperatures of 292 degrees below zero, is published in Science Advances, Feb. 27.

The work is led by chemical molecular dynamics expert Paulette Clancy and first author James Stevenson, a graduate student in chemical engineering. The paper's co-author is Jonathan Lunine, director for Cornell's Center for Radiophysics and Space Research. Living on the Edge: Stars Found Far from Galaxy Center. The newfound young star clusters lie thousands of light-years below the plane of our Milky Way galaxy, a flat spiral disk seen in this artist's conception. 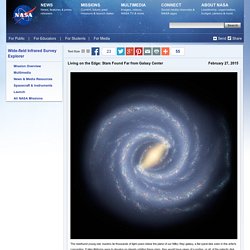 If alien lifeforms were to develop on planets orbiting these stars, they would have views of a portion, or all, of the galactic disk. Astronomers using data from NASA's Wide-field Infrared Survey Explorer, or WISE, have found a cluster of stars forming at the very edge of our Milky Way galaxy. "A stellar nursery in what seems to be the middle of nowhere is quite surprising," said Peter Eisenhardt, the project scientist for the WISE mission at NASA's Jet Propulsion Laboratory in Pasadena, California. "But surprises turn up when you look everywhere, as the WISE survey did. " The discovery, led by Denilso Camargo of the Federal University of Rio Grande do Sul in Porto Alegre, Brazil, appears in a new study in the journal Monthly Notices of the Royal Astronomical Society. JPL managed and operated WISE for NASA's Science Mission Directorate. Buzz Aldrin: Leonard Nimoy, my fellow space traveler. Nimoy's Mr. 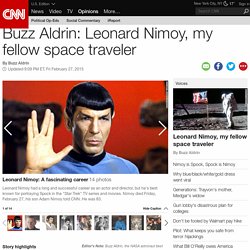 Spock in the original "Star Trek" television show, followed by the series of movies, proved to be a seminal, enduring and endearing character. While the late Neil Armstrong's "one small step for man," as we began our exploration of the Moon back in July 1969, is ageless, so, too, is Spock's iconic "live long and prosper," a phrase that also spans time and space.

Buzz Aldrin It brought out the Vulcan in all of us; that, for me, translated into a peaceful progression of exploring the vastness of outer space for all mankind. Nimoy's quite logical and always calm Spock struck me as an ideal person to have with us onboard a spaceship headed into the unknown. Leonard's final communiqué to his fans read: "A life is like a garden. NASA Sees 'Bright Spots' On Dwarf Planet In Our Solar System.

An image of Ceres taken by NASA's Dawn spacecraft shows that the brightest spot on the dwarf planet has a dimmer companion. 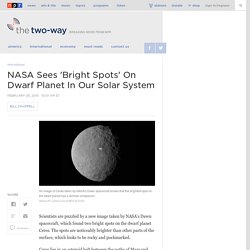