Big Dipper & Big Lights now on #northernlightscam Snap from auroraphile: Valley Flowers. Westernmost star in Orion’s belt is actually a complex multiple star system. Learn more. China says it plans to land a rover on Mars in 2020. The country plans to send a rover to the Red Planet in 2020, according to the country's state news agency Xinhua. 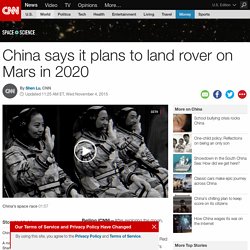 New planetary finds hailed as breakthroughs. The two finds, one planet at the edge of our solar system and one just beyond, have both been hailed as major scientific advances. 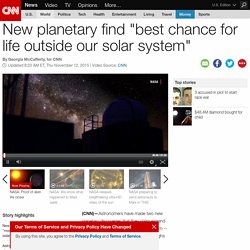 Commenting on one of the planets, Brad Tucker, an astronomer from Mount Stromlo Observatory in Canberra, Australia who was not involved in the research, said it "probably gives us the best chance for life outside our solar system right now. " "One of the goals of astronomy and astrophysics and finding these planets is firstly to really find another Earth," he added. NASA's New Ultra-HD Video Of The Sun Is Breathtaking. 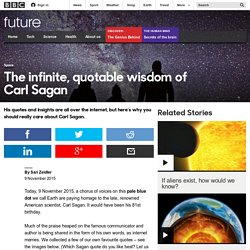 It would have been his 81st birthday. Much of the praise heaped on the famous communicator and author is being shared in the form of his own words, as internet memes. We collected a few of our own favourite quotes – see the images below. (Which Sagan quote do you like best? Let us know on our social media pages at the links below.) Such sharing is arguably a fitting way to remember the man who brought science to the masses with his talents as an orator – constantly reminding us that at the heart of technical and scientific innovation is the notion that we are all connected in our shared journey through this vast Universe. An accomplished scientist, Sagan was an outspoken and inquisitive astronomer, cosmologist, astrophysicist and astrobiologist.

In 1977, Sagan led the project to share the voice of humanity with the cosmos. Human Spaceflight & 30 Years of NASA Shuttle Missions. Atlantis' Crew Leaves the Shuttle 21 July 2011, 07:14 AM EDT After gliding to a smooth landing at 5:57 a.m. 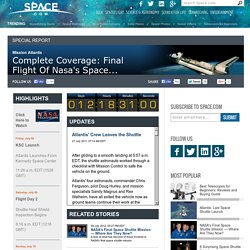 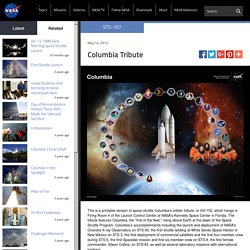 First Shuttle Launch. First Space Shuttle Launch - STS-1 (1981) STS-133: Discovery's Final Mission. #TISH Vid: Discovery STS-120's landing, 8 years ago today... #SpaceTweeps #STS120TweetUp (1/3) If the planets were as close as the moon is. @thinker68 @StationCDRKelly Working harder? When shifting heavy weights at the finger tips like @Astro_Wheels ? @AstroDocScott @Astro_Wheels Here's a great hang shot by @Astro_Wheels. At 46 billion pixels, this is the largest ever image of space. Black hole + star = EPIC. 15 Years of Station Told in 15 Gifs. 15 Years On Station. Photo of the Day: Saturn's moon Enceladus taken by NASA's Cassini spacecraft during its Oct 28th flyby. Keeping people off the planet since 2000. #15YearsOnStation. Two stars shine through the center of a cascading dust ring in this new @NASA_Hubble image. 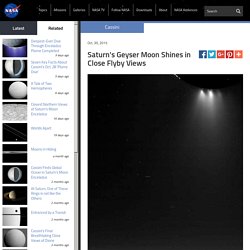 Thickness of layers shown here is not to scale. Credits: NASA/JPL-Caltech A global ocean lies beneath the icy crust of Saturn's geologically active moon Enceladus, according to new research using data from NASA's Cassini mission. Researchers found the magnitude of the moon's very slight wobble, as it orbits Saturn, can only be accounted for if its outer ice shell is not frozen solid to its interior, meaning a global ocean must be present.

Milky Way over Yellowstone. Dead comet that will safely zip by Earth on Oct 31 looks eerie like a skull #HappyHalloween. Day 217. #Moon sets. May the howling begin. #GoodNight from @space_station! #YearInSpace. Active Regions Blossoming. 7 Things to Know About Spacewalks. .@NASA_Dawn heads toward its final orbit of dwarf planet Ceres. New mosaic of bright spots. China Put a Telescope on the Moon in 2013, Astronomers Reveal. #DidYouKnow China stealthily placed a telescope on the moon two years ago >> Just caught this guy churning in the middle of the #AtlanticOcean. #YearInSpace. Pluto in 3-D! Get out your red/blue stereo glasses to view a special @NASANewHorizons image. High above a blue Earth, the #Space Shuttle Disocvery is pictured from the @Space_Station #onthisday in 2007. The Arches cluster is one of the most crowded collections of stars in the Milky Way.

This stunning galaxy seen by @NASA_Hubble is around 16 million light-years away #NASABeyond. Hubble has taken its deepest look into the cosmos to see some of the earliest galaxies >> This week the sun featured a very long filament, elongated clouds of plasma @NASASunEarth. Clump in Saturn’s F ring, which is constantly changing structure, spotted by @CassiniSaturn. Happy hour on a comet? Large amounts of alcohol being released into space by comet Lovejoy. As a bird soars in the foreground, the #Space Shuttle Discovery blasts off from @NASAKennedy #onthisday in 2007. By 2045, companies like @WorldViewVoyage will have made space tourism a reality. #BackToTheFuture. I agree @ssaig! Beauty and dimension far beyond human comprehension. We are a "mote of dust suspended in a sunbeam".

China has had a secret telescope on the moon for 18 months, astronomers reveal >> Find out why a dry lake bed in Death Valley might hold the clues to finding life on Mars >> .@NASA_Hubble sees an elegant spiral hiding a hungry monster in the constellation of Virgo. Pluto's moon Charon is ready for its closeup. New @NASANewHorizons #PlutoFlyby views. To save on weight, a detour to the moon is the best route to Mars. Launching humans to Mars may not require a full tank of gas: A new MIT study suggests that a Martian mission may lighten its launch load considerably by refueling on the moon. 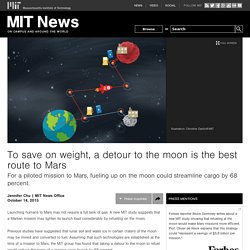 Previous studies have suggested that lunar soil and water ice in certain craters of the moon may be mined and converted to fuel. The more we see, the more fascinating it is. Pluto's patterns & pits seen by @NASANewHorizons. Earth - How far do you travel through space in 60 seconds? Certainly a place of awe & wonder; The #Cupola is a perfect refuge for reflection & artistic expression. @katrobison. New closest northern views of Saturn's icy, ocean-bearing moon Enceladus! @CassiniSaturn pics. Some raw images from the Enceladus flyby on Oct. 14. Processed images coming soon. Details. Mind-blowing Pluto has ice mountains and water. But Pluto is turning out to be full of surprises. 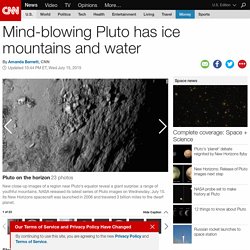 "I'm completely surprised," said Alan Stern, principal investigator for NASA's New Horizons spacecraft. The first zoomed-in image of Pluto was released on Wednesday, a day after the spacecraft made its closest pass over Pluto, cruising about 7,700 miles over the surface. The probe traveled more than 3.6 billion miles to snap the photo, and scientists think it was well worth the trip.

So the other hemisphere had an eclipse. Meh. #wehadabetterone. Blood Moon over #croydon @CroydonAd @NatGeo @BBCEarth @WildlifeMag @standardnews. Supermoon total lunar eclipse offers rare sky event. Stargazers are about to get a double celestial treat when a total lunar eclipse coincides with a supermoon. 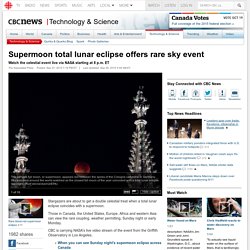 Those in Canada, the United States, Europe, Africa and western Asia can view the rare coupling, weather permitting, Sunday night or early Monday. CBC is carrying NASA's live video stream of the event from the Griffith Observatory in Los Angeles. NASA's solar physicist Mitzi Adams will also discuss the eclipse and answer questions from Twitter with the hashtag #askNASA. It's the first time the events have made a twin appearance since 1982, and they won't meet again until 2033. When a full moon makes its closest approach to Earth, it appears bigger and brighter than usual and is known as a supermoon. That will coincide with a full lunar eclipse where the moon, Earth and sun will be lined up, with Earth's shadow totally obscuring the moon.

NASA released some helpful animations to explain the event. Halifax/East Coast: At 9:11 p.m. Images of lunar eclipse Sept in Edmonton Ab area. Gallery: Super blood moon captivates Edmonton sky watchers. Don't forget! Tonight's #SuperBloodMoon will be the last appearance until 2033. Does tonight's blood moon signal the end of the world? We hope not! >> Get your camera & snap a pic of tonight's #SuperBloodMoon, then share with us on @Facebook. Tonight, a #SuperBloodMoon will occur. Watch live on NASA TV starting at 8pm ET.

Supermoon Lunar Eclipse. I'm hoping for clear skies tonight! @NASA explains why it's such a rare event (photo Arrigo) Don’t forget! Today, a #SuperBloodMoon will be visible for the last time until 2033. Which Astronomy Photos Will Take Your Breath Away? NASA sur Twitter : "Mars is infamous for dust storms. Are they as bad as they seem in SciFi? Here are the facts: