Stars and other Celestial Stellar objects 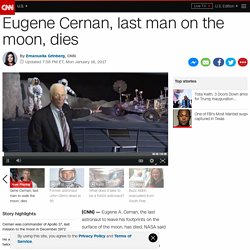 His family confirmed the news in a statement Monday, saying he died following "ongoing health issues. " "Our family is heartbroken, of course, and we truly appreciate everyone's thoughts and prayers. Gene, as he was known by so many, was a loving husband, father, grandfather, brother and friend," the family said. What It Looks Like To Leave Our Solar System At The Speed Of Light. Time-Lapse Videos. This clickable map organizes all of the existing time-lapse sequences into geographical regions. 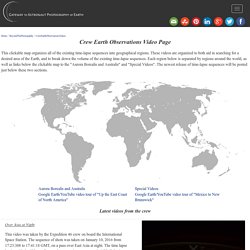 These videos are organized to both aid in searching for a desired area of the Earth, and to break down the volume of the existing time-lapse sequences. Each region below is separated by regions around the world, as well as links below the clickable map to the "Aurora Borealis and Australis" and "Special Videos". Blue Moon Stories: Spaceweather.com. "Once in a blue moon... 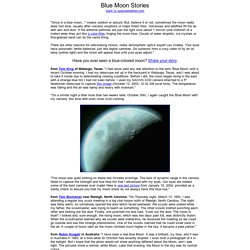 " means seldom or absurd. But, believe it or not, sometimes the moon really does turn blue, usually after volcanic eruptions or major forest fires. Volcanoes and wildfires fill the air with ash and dust. What Is a Blue Moon? A blue moon is full moon that occurs as the second full moon in a given month. 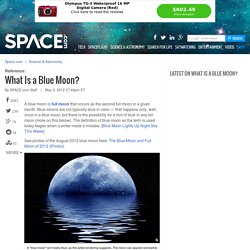 Blue moons are not typically blue in color — that happens only, well, once in a blue moon, but there is the possibility for a hint of blue in any full moon (more on this below). The definition of blue moon as the term is used today began when a writer made a mistake. [Blue Moon Lights Up Night Sky This Week] See photos of the August 2012 blue moon here: The Blue Moon and Full Moon of 2012 (Photos) The phrase "blue moon" is "a creature of folklore," explains Philip Hiscock, a folklorist at the Memorial University of Newfoundland.

Wayward satellites repurposed to test general relativity. ESA/J.Huart An artist's conception of one of the Galileo GPS satellites. 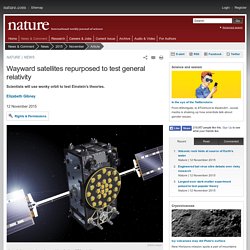 Two satellites that were accidentally launched into the wrong orbit will be repurposed to make the most stringent test to date of a prediction made by Albert Einstein’s general theory of relativity — that clocks run more slowly the closer they are to heavy objects. The satellites, operated by the European Space Agency (ESA), were mislaunched last year by a Russian Soyuz rocket that put them into elliptical, rather than circular, orbits. Volcanic rock hints at source of Earth’s water. Arctic-Images/Corbis Lava from Earth's mantle has given scientists clues about the origin of the planet's water. 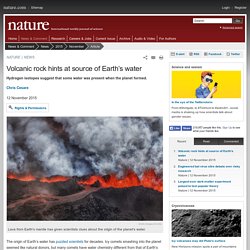 The origin of Earth’s water has puzzled scientists for decades. Icy comets smashing into the planet seemed like natural donors, but many comets have water chemistry different from that of Earth’s oceans. Jupiter's Icy Moon Europa: Best Bet for Alien Life? WASHINGTON — Jupiter's moon Europa doesn't look like a particularly inviting place for life to thrive; the icy satellite is nearly 500 million miles (800 million kilometers) from the sun, on average. 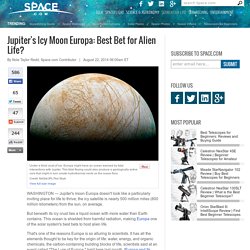 But beneath its icy crust lies a liquid ocean with more water than Earth contains. This ocean is shielded from harmful radiation, making Europa one of the solar system's best bets to host alien life. That's one of the reasons Europa is so alluring to scientists. Airglow Formation. Captures of elusive red sprites from ISS. Lightning sprite, or red sprite, above a thunderstorm in northwest Mexico. 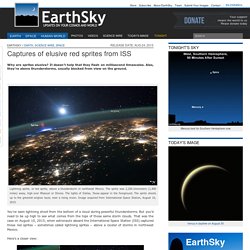 The sprite was 2,200 kilometers (1,400 miles) away, high over Missouri or Illinois. The lights of Dallas, Texas appear in the foreground. The sprite shoots up to the greenish airglow layer, near a rising moon. Cygnus. In Greek mythology there are four characters known as Cycnus or Cygnus, listed on this Wikipedia webpage. 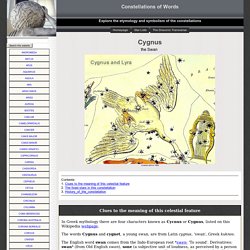 The words Cygnus and cygnet, a young swan, are from Latin cygnus, 'swan', Greek kuknos. The English word swan comes from the Indo-European root *swen- 'To sound'. Derivatives: swan¹ (from Old English swan), sone (a subjective unit of loudness, as perceived by a person with normal hearing), resonate, sonic, sonnet, sound¹, unison, (these words from Latin sonus), sonar, sonant (voiced, as a speech sound), sonata, sonorous, assonance, consonant, dissonant, resound, (these words from Latin sonare, to sound). [Pokorny swen- 1046. Watkins]. Eltanin and Rastaban are the Dragon's Eyes. Our human eyes and brains tend to pick out pairs of stars on the dome of night, especially if the two stars are relatively bright. 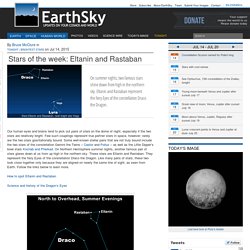 Few such couplings represent true partner stars in space, however; rarely are the two stars gravitationally bound. Some well-known stellar pairs that are not truly bound include the two stars of the constellation Gemini the Twins – Castor and Pollux – as well as the Little Dipper’s bowl stars Kochab and Pherkad. On Northern Hemisphere summer nights, another famous pair of stars glares down at us from up high in the northern sky. These stars are Eltanin and Rastaban. Constellations & Ancient Civilizations.