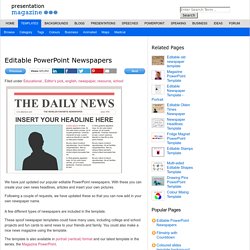 With these you can create your own news headlines, articles and insert your own pictures. Following a couple of requests, we have updated these so that you can now add in your own newspaper name. A few different types of newspapers are included in the template. These spoof newspaper templates could have many uses, including college and school projects and fun cards to send news to your friends and family. The template is also available in portrait (vertical) format and our latest template in the series, the Magazine PowerPoint. If you liked this PowerPoint Template we would appreciate you liking it on FaceBook or Tweeting it. 13 October 2014 Template number 00253.

Solar System ESL Presentation by CJ Webster on Prezi. Space. The Beatles - 'Across the Universe' "Words are flying out like endless rain into a paper cup They slither while they pass They slip away across the universe Pools of sorrow waves of joy are drifting thorough my open mind Possessing and caressing me" (lyrics007.com)NASA Beams Beatles' 'Across the Universe' Into Space "The transmission was aimed at the North Star, Polaris, which is located 431 light years away from Earth. 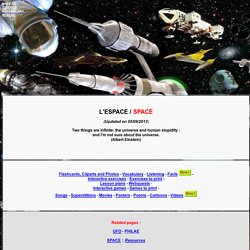 " "I see that this is the beginning of the new age in which we will communicate with billions of planets across the universe," she (Lennon's widow, Yoko Ono) said. " Listen to the song and watch the video. Breaking News English ESL Lesson Plan on Ticket to Mars. NASA is looking for people to go to Mars, and never come back. 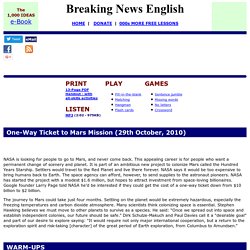 This appealing career is for people who want a permanent change of scenery and planet. It is part of an ambitious new project to colonize Mars called the Hundred Years Starship. Settlers would travel to the Red Planet and live there forever. NASA says it would be too expensive to bring humans back to Earth. The space agency can afford, however, to send supplies to the astronaut pioneers. The journey to Mars could take just four months. 1. 2. Have a chat about the topics you liked. Movie Segments for Warm-ups and Follow-ups: The 5th Element: Space Tourism. Space tourism is space travel for recreational, leisure or business purposes. 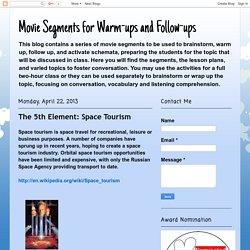 A number of companies have sprung up in recent years, hoping to create a space tourism industry. Orbital space tourism opportunities have been limited and expensive, with only the Russian Space Agency providing transport to date. Read the text below and discuss the questions It was taken form the awesome site Howstuffworks. Check it out. It is worth visiting The space tourism industry is officially open for business, and tickets are going for a mere $20 million for a one-week stay in space. On September 18, 2006, Anousheh Ansari, a telecommunications entrepreneur, became the first female space tourist and the fourth space tourist overall. These trips are the beginning of what could be a lucrative 21st century industry. Teacher's Guide to Teaching About Space.

Guide to Space Then if you can imagine there are a number of smaller bouncy balls spinning around the beach ball, but are much further away. 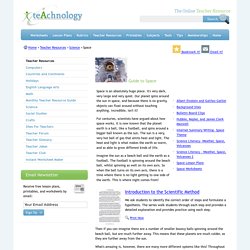 This means that these planets are much colder, as they are further away from the sun. What's amazing is, however, there are many more different systems like this! Throughout the whole of space, you will find many suns (or beach balls) which all have planets trailing around them. And as it is thought that space is infinite, this means there is an absolutely huge number of planets out there - which could possibly contain life like planet earth does! So what does infinite mean? Now imagine you have coins in your pocket. Basically, 'infinite' means there is no end!

In space, nobody can hear you talk either. Space begins, technically, at about 200 kilometers above the earth. Related Teacher Resources That Are Worth A Look: NASA's Picture Dictionary. In pictures: Journey through the planets. Nasa's New Horizons mission is sending back the most detailed images of Pluto ever seen. 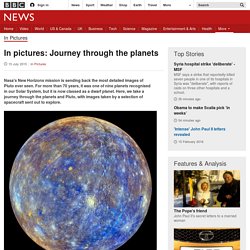 For more than 70 years, it was one of nine planets recognised in our Solar System, but it is now classed as a dwarf planet. Here, we take a journey through the planets and Pluto, with images taken by a selection of spacecraft sent out to explore. Learnenglishteens.britishcouncil.