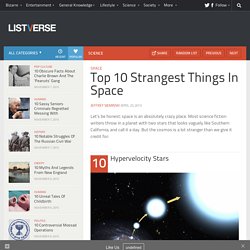 Most science fiction writers throw in a planet with two stars that looks vaguely like Southern California, and call it a day. But the cosmos is a lot stranger than we give it credit for: Everyone knows that shooting stars are just meteors entering the atmosphere, right? If you didn’t, congratulations—you just failed the fourth grade. Space Shuttle Discovery - 360VR Images by Jook Leung. Carl Sagan on black holes and the bending of light. Is 'Planet Nine' actually a grapefruit-sized black hole? Big new telescope could find out. Does the Universe Have a Purpose? feat. Neil deGrasse Tyson. 2012 Nobel Prize: How Do We See Light? Millenium Simulation. Dark alien planet discovered by NASA. An alien world blacker than coal, the darkest planet known, has been discovered in the galaxy. 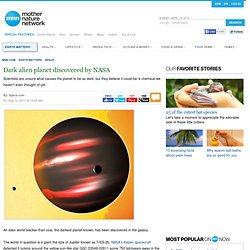 2011 Nobel Prize: Dark Energy feat. Sean Carroll. New comet likely to impress when it passes closest to Earth in December. By Alan Pickup, The GuardianSunday, October 14, 2012 20:16 EDT A comet found recently beyond the orbit of Jupiter could well become spectacular late next year and may be a sibling of one of the most celebrated comets of all time. 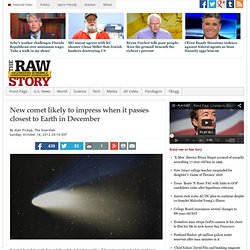 What is formally known as Comet C/2012 S1 (ISON) was not at first recognised as a comet when it was spotted as a 19th magnitude object using a small Russian telescope of the International Scientific Optical Network on 21 September. Earlier images have been found stretching back to last year, allowing its orbit to be calculated and showing that it is destined to sweep within 1.2 million km of the Sun’s surface at perihelion on 28 November 2013. Carl Sagan explains how he came to know what the stars are. Carl Sagan on UFOs. Carl Sagan - Profound Words of Wisdom. Top 5 Coolest Things about Curiosity. Photopic Sky Survey.

Space Elevators. JUMP FROM THE EDGE OF SPACE. Galaxy. Www.dynamicdiagrams.com/wp-content/uploads/2011/04/orrery_2011_bce.swf. 100,000 Stars. 11 cheap gifts guaranteed to impress science geeks. Earth-size planet found: Lightest exoplanet yet orbits Sun-like star Alpha Centauri B. Newly found world orbits Alpha Centauri B, 4.3 light years from our SunIt is the lightest exoplanet yet found orbiting a Sun-like starIt is thought to be too hot for life, and there is likely no water presentBut presence suggests there may be other planets within the same system By Daily Mail Reporter Published: 08:18 GMT, 17 October 2012 | Updated: 12:37 GMT, 17 October 2012 An Earth-sized planet has been found orbiting a star in Alpha Centauri, our nearest neighbouring solar system. 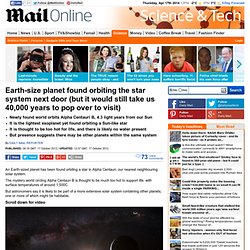 Sizes of the Universe Poster. Physics 20b: Introduction to Cosmology - Spring 2010 - Download free content from UC Irvine. Hubble Heritage Gallery of Images. View from Satellite. The Scale of the Universe 2.

Gizmodo. Scientists say mysterious 'Oumuamua' object could be an alien spacecraft. Get the Mach newsletter. 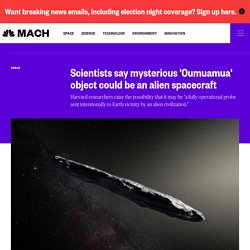 Nov. 5, 2018 / 7:06 PM GMT By David Freeman Maybe it's an alien spacecraft. Scientists have been puzzling over Oumuamua ever since the mysterious space object was observed tumbling past the sun in late 2017. Scientists detect rare crash of two mismatched black holes for the first time ever. Colliding black holes aren't always as evenly matched as scientists expected, according to a cosmic chirp astronomers have puzzled over for a year. 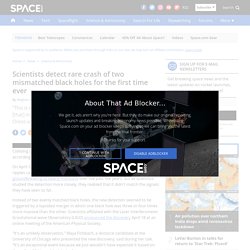 On April 12, 2019, gravitational wave detectors picked up a signal of space-time ripples caused by colliding black holes — which in and of itself has gone from groundbreaking to nearly mundane over the past five years. But as scientists studied the detection more closely, they realized that it didn't match the signals they have seen so far. Four ‘Mysterious Signals From Outer Space’ Are Coming From Galaxies Like Ours, Say Scientists. Go outside on a hot day and feel the Sun on your skin. 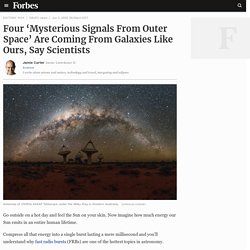 Now imagine how much energy our Sun emits in an entire human lifetime. Compress all that energy into a single burst lasting a mere millisecond and you’ll understand why fast radio bursts (FRBs) are one of the hottest topics in astronomy. First discovered in 2007 at Australia’s Parkes radio telescope, FRBs are very brief, very bright single radio pulses that can last for several milliseconds. It’s estimated that several thousand per day are occurring over the entire sky.

A Repeating Signal Is Coming From Another Galaxy. The paper on this discovery, published earlier this month, marked the end of formal observations in February. 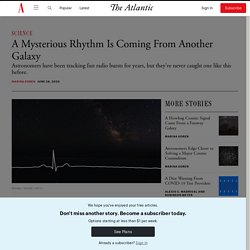 Like so many people this year, Li has spent most of her days at home, rarely venturing beyond the walls of her small apartment in Bonn, Germany, but the Canadian observatory continues to scan the skies, catching the fleeting FRBs as little smudges of black against a plot of white noise. NASA's Hubble telescope solves the curious case of Betelgeuse. The saga of Betelgeuse has been ongoing for nearly a year now. 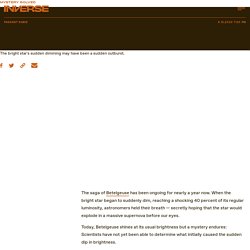 When the bright star began to suddenly dim, reaching a shocking 40 percent of its regular luminosity, astronomers held their breath — secretly hoping that the star would explode in a massive supernova before our eyes. NASA watches as weird 'dent' in Earth's magnetic field splits in two. There's something very strange happening high above South America and the nearby Atlantic Ocean, and NASA is on the case. 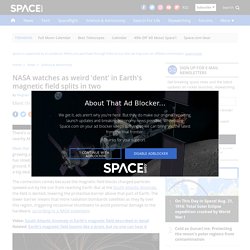 Meet the South Atlantic Anomaly, a strange dent in Earth's magnetic field that is growing and splitting. It's been there for decades, but over time the anomaly has slowly changed. Although you'd never notice anything was wrong from the ground, for satellites, changes to the magnetic field that envelopes Earth can be a big deal — hence NASA's interest in the anomaly and its activities.

The connection comes because the magnetic field blocks charged particles spewed out by the sun from reaching Earth. But at the South Atlantic Anomaly, the field is dented, lowering the protective barrier above that part of Earth.