French Billionaire gives 100 million Euros to rebuild Notre-Dame. Draw a line between the Earth and Venus and let them run for 8 years and it creates this... *****Neil Armstrong having breakfast #OTD in 1969. before departing for the Moon. *****#Map shows spacecraft cemetery with 161 objects on the sea floor, including the Russian Mir space station! Blog. 14 July 1965. American space probe 'Mariner 4' flew by Mars and sent back first photo of the planet. Our @MarsCuriosity rover has begun its long-anticipated study of an iron-bearing ridge, a key mission destination. *****Cutaway diagram of the proposed Manned Venus Flyby craft using #Apollo hardware from 1967. @thehighfrontier @BIS_spaceflight @dallascampbell. This stunning spectacle is known as the 'staircase to the moon' and it took place in @austnorthwest this week (via IG/@danavilaphotography) *****1969: James Cameron (no, not that one) went to Houston to visit NASA. Documentaries had wonderful prose back in 1969.

#OTD 1961: Yuri Gagarin, the world's first ever spaceman, arrived in the UK. Total solar eclipse 2017: How rare is the Aug. 21 eclipse path? - Washington Post. Experiments in micro gravity on animals were conducted on planes first. Mars with as much water as on the Earth #Mars #Space. *****Full rotation of the #Moon captured by the @LRO_NASA Wide Angle Camera (WAC) #MoonCrushMonday. In 1911, the New York Times reported on the progress of aliens building canals on Mars. *****Earthshine: Ran out to catch the moon andvearthshine just before it set behind the trees. Pretty fond of the school bus placement! Twitter. Solar eclipses are rare. They don't happen every day or even every month. Here's why. 405 years ago in these days, Galileo started to track and draw sunspots as they appear here. June 18, 1178: Five monks from Canterbury observed the #Moon 'splitting in two'. Was this a huge meteor impact? Apollo 10 had a little known incident in flight as evidenced by this transcript.

*****Daytime Moon Meets Morning Star by Phillip A Cruden #ASTRONOMY. *****3D nebulae: J-P Metsavainio makes breathtaking stereoscopic views of nebulae: this is Melotte 15 in the Heart Nebula. A year of earth in the #solarsystem. A group of Soviet cosmonauts singing along to popular Soviet song "May There Always Be Sunshine", 1963. Scientists have proved you can hear the 'chirp' of gravity. Researchers have announced the third detection of gravitational waves—ripples in the fabric of space and time. 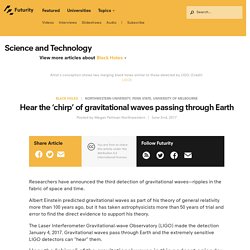 Albert Einstein predicted gravitational waves as part of his theory of general relativity more than 100 years ago, but it has taken astrophysicists more than 50 years of trial and error to find the direct evidence to support his theory. The Laser Interferometer Gravitational-wave Observatory (LIGO) made the detection January 4, 2017. Gravitational waves pass through Earth and the extremely sensitive LIGO detectors can “hear” them. We always hear that #Pluto is a tiny planet. This #map shows just how small: Not even the size of #Australia. *****Apollo 11 Immigration Form, 1969.

Highlights of the Summer Sky. *****1964: A man on the Moon by 1970?! Patrick Moore was having none of it. Great American #hero. Quite pleased with the @Space_Station pics I grabbed through my telescope this morning. Not bad from a distance of 700KM! #Dunedinisgreat. *****ISS @ProfBrianCox I managed to video the @Space_Station transiting the very same moon at 20:23 last night with my iphone & telescope□ An awesome size comparison of the bodies of our Solar System, by Alvaro Gracia Montoya.

A ~20-meter asteroid, 2017 KW31, will make a close flyby of Earth today (1.2 Lunar Distance) "LRO images stitched together give a great view of the #Apollo 11 landing site" A full rotation of our moon in HD, *****From the Earth to the limits of the Milky Way Earth Zoom Out. #Jupiter sings: hear plasma wave signals from Jupiter’s ionosphere converted to sound. #FridayIsland #Timelapse over Cape Verde and up the coast along the Sahara and Morocco, Gibraltar and on to cloudy Eastern Europe and Russia. Get your big TV's ready! Hale Crater with Astronaut.

Here is a preview of a @NASAJuno animation by Gerald Eichstädt. Upscaled, Uptimed x3, Process x12. *****Sometimes I think my only job as a planetary scientist is to remind us we live on that lonely mote of dust and we can only save ourselves. Vehicles of the early space age. From NASA Mercury spacecraft to the Space Shuttle. Today in Ladybird 25 May 1961 John F. Kennedy sets the goal of putting a man on the Moon before the end of the decade #BKnight.

Moon shielding Earth from collision with space junk. Popsci. Today’s spacesuits are designed to work well while astronauts float around outside the International Space Station. 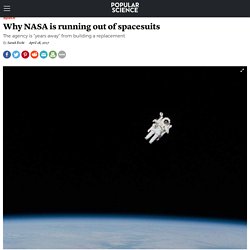 But they’re not quite right for walking around on the moon or Mars—they’re too heavy and don’t provide enough flexibility in the hips and knees. That’s why NASA is investing in a next-generation spacesuit for exploring deep space. However, the space agency may soon find itself up s*** creek without a pressure suit. A new report from the Office of Inspector General (OIG) says NASA is running out of its older spacesuits, known as Extravehicular Mobility Units (EMUs). Only 11 of the original 18 suits are left, and they may not be enough to last until the ISS gets decommissioned in 2024. Of the seven missing spacesuits, four were lost in the Challenger and Columbia disasters, one was destroyed in the SpaceX explosion in June of 2015, one was lost during testing, and one was a prototype that was never meant to fly.

Here’s why NASA needs a game plan. There’s not enough funding. Watch the constellation of Orion change from 50,000 BCE to 100,000 CE, as its stars move relative to each other. (Images by @MartinVargic.) ‘Here’s What We’ll Wear in Space’ c. 1956. A wonderful portrait of the #space race era; the crew of #Apollo11 & their families, 1969. #neilarmstrong #buzzaldrin #michaelcollins. *****Sky Calls (1959) v SpaceX Falcon 9 (2016) Science fiction becomes reality - rocket lands vertically. Tripping on the moon. *****The scale of the universe. Watch for the last quarter moon tonight after midnight and use it to imagine Earth's motion through space. #think3D. Jupiter shields the inner planets from asteroids. *****Make your own Buzz Aldrin (1978)!!!!! Image of the week: #Saturn's hexagonal polar jet stream. When you track the relative positions of Earth and Venus over 8 years, this is the resulting pattern. ht: @WorldAndScience.

This is the clearest picture of Mercury that has ever been taken. That bright star? That's not a star; it's Earth shining through a gap in Saturn's rings. (Photo by NASA/JPL/Caltech/SSI.) Do you know more about the Milky Way or a galaxy far, far away? Take our quiz this #StarWarsDay #MayThe4thBeWithYou. Viewer. This day 1715: Total solar eclipse across northern Europe and Asia, as predicted by Edmond Halley. Here's his map. Preparing for blastoff □Get ready to build and complete a successful Moon landing #LEGOSaturnV #LEGOIdeas. Abbey Road 2 fun fact - those beige baffles, till recent refurbishment, used to be stuffed with seaweed #OctopusGarden.

The solar system amazes me. A picture of everywhere we've ever been. *****Solar System in a Bottle (to scale) – LittlePlanetFactory. *****Earth and Moon from Saturn: A doomed spacecraft gazes longingly at its birth world. This @NASA drone could fly around Mars. #OnThisDay 1973: Showering in space doesn't have to be awkward - we mean, it is, but it doesn't have to be! *****1959 v 2016 Space X Falcon. Happy Easter (via @RiffBirds) *****Earth from space “Look at that, you son of a bitch."

*****Atmospheric pressure: The fascinating and terrible things that would happen to you if you tried to fly on Jupiter — and other planets. #Onthisday 1970: Apollo 13 was in trouble after an explosion. Who needs Tom Hanks with drama like this? Read more. *****Enceladus: Another smoking gun in the search for life in Enceladus’ ocean. This illustration shows Cassini diving through the Enceladus plume in 2015.Credits: NASA/JPL-Caltech Today, NASA-funded scientists announced a major new step in the search for life on Enceladus, Saturn’s sixth-largest moon, thanks to new data collected by the NASA/ESA Cassini mission. 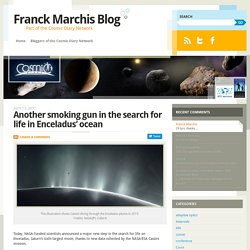 Enceladus has attracted a lot of interest because it has an active pole that spews jets of material into outer space. *****Enceladus discoveries Apr 2017. Two veteran NASA missions are providing new details about icy, ocean-bearing moons of Jupiter and Saturn, further heightening the scientific interest of these and other "ocean worlds" in our solar system and beyond. 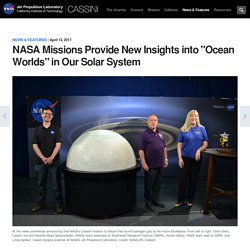 The findings are presented in papers published Thursday by researchers with NASA’s Cassini mission to Saturn and Hubble Space Telescope. In the papers, Cassini scientists announce that a form of chemical energy that life can feed on appears to exist on Saturn's moon Enceladus, and Hubble researchers report additional evidence of plumes erupting from Jupiter's moon Europa. This is the closest we've come, so far, to identifying a place with some of the ingredients needed for a habitable environment. At Saturn, Energy for Life. *****Enceladus: Life on another planet? Ever since studies started suggesting that chemical reactions between water and rock on Saturn’s moon Enceladus could provide enough energy in the water to feed microbial life, scientists have been searching for proof that the right sort of reactions really do occur. 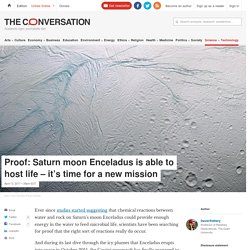 OS OpenData Easter 'Egg's. All the Easter “Egg”sin Ordnance Survey OpenData From Eggborough, Break Egg Hill and one of the three Egg Clumps to Egghill Dingle and the fabulous Eggs Tump. 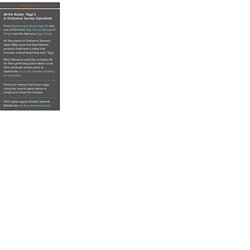 All the places in Ordnance Survey's Open Map Local and OpenNames products that have a name that includes a word beginning with “Egg”. Why? #OTD 1967: A sleepy village in Hampshire entered the space age, with the opening of the Chilbolton Observatory. Yuri's spaceship malfunctioned, he endured 12Gs, ejected 7 km up & landed 330 km short of target, alone. Brave first man, 56 years ago today. Cosmonautics Day□ April 12, 1961, Russian cosmonaut Yuri #Gagarin became the first human to travel into #space. On this day in 1961. Log In - New York Times. This is how Jupiter 'shepherds' the asteroid belt, preventing asteroids from falling into the sun or hitting planets. If Betelgeuse would explode transiting from the red super giant stage to supernova then our sky would light continuously for two months.

Something a bit different - the newly discovered ~5-meter asteroid (meteoroid), 2017 GM, will just miss the Earth today at only 15 000 km. Since the sun is also moving, this is a better representation of how the planets revolve around the sun. Unveils New Searchable Video, Audio and Imagery Library.

We are so insignificant in the universe. *****Meteor showers from space. What am I looking at? 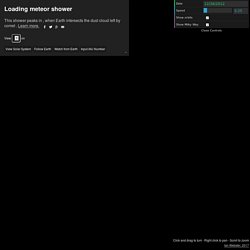 Meteor showers on Earth are caused by streams of meteoroids hitting our atmosphere. These meteoroids are sand- and pebble-sized bits of rock that were once released from their parent comet. Some comets are no longer active and are now called asteroids. Lovely shot David. Sand dunes are scattered across Mars and one of the larger populations exists in the Southern hemisphere. 23 March 1840. The oldest surviving photo of the Moon was taken by Dr. John Draper from New York. A new study claims the planets of TRAPPIST-1 are packed so tightly that seeds of life could be hopping between them.

.@plumsahoy2016 asks: "Do you feel any changes in body temperature as you go from day into night on spacewalks?" #AskNASA. The sun has had no sunspots, for 11 days, a spotless stretch that we have not seen since the last solar minimum. Moons Phobos & Deimos like #Mars so much they might put a ring on it. Mars may have had rings & might again someday. Cosmonaut Alexey Leonov took the first #space walk in history on March 18, 1965. It lasted 12 minutes and 9 seconds.