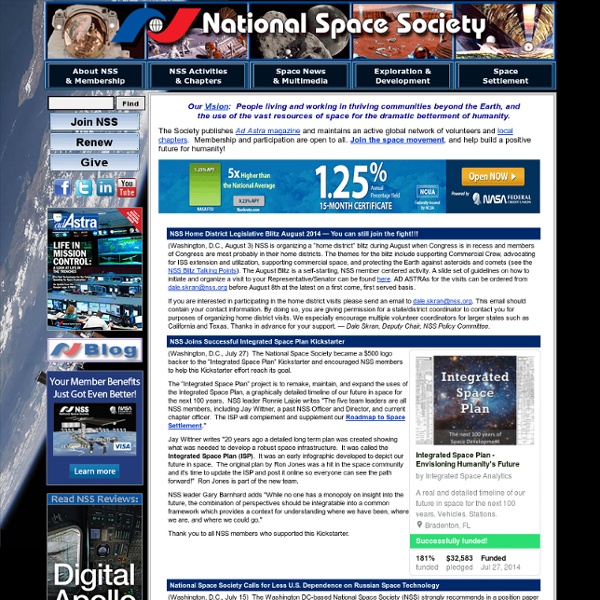 Space Frontier Foundation — Advancing Newspace, championing ideas for opening the space frontier to human settlement as rapidly as possible Space Job Center > Get a job in space industry now | Your space carrer starts here. Bad Astronomy Well now, this is an interesting discovery: astronomers have found what looks like a "super-Earth" – a planet more massive than Earth but still smaller than a gas giant – orbiting a nearby star at the right distance to have liquid water on it! Given that, it might – might – be Earthlike. This is pretty cool news. Now let me be clear: this is a planet candidate; it has not yet been confirmed. The star is called HD 40307, and it’s a bit over 40 light years away (pretty close in galactic standards, but I wouldn’t want to walk there). Massive planets tug on their star harder, so they’re easier to find this way. In this case, HD 40307 was originally observed a little while back by HARPS, and three planets were found. We don’t know how big the planet is, unfortunately. But the very interesting thing is that it orbits the star at a distance of about 90 million kilometers (55 million miles) – closer to its star than is is to the Sun… but that’s good! Image credits: ESO/M. Related Posts:

San Jose Astronomical Association American Astronautical Society Formed in 1954, the American Astronautical Society (AAS) is an independent scientific and technical group in the United States dedicated to the advancement of space science and exploration. AAS supports NASA's Vision for Space Exploration and is a member of the Coalition for Space Exploration and the Space Exploration Alliance. The AAS also focuses on strengthening the global space program through cooperation with international space organizations. The AAS runs national meetings, symposia and publications. Members meet with leaders in their field and in related disciplines, exchange information and ideas, discuss career aspirations and expand their horizons. The AAS sponsors professional, scientific and engineering meetings and maintains a publications program. AAS awards[edit] The awards are listed in the order in which they were established by the society: The AAS was awarded the Space Foundation's Space Achievement Award in 1996.[1] References[edit] External links[edit]

Solar System, Solar System Information Our Cosmic Neighborhood From our small world we have gazed upon the cosmic ocean for thousands of years. Ancient astronomers observed points of light that appeared to move among the stars. Since the invention of the telescope, three more planets have been discovered in our solar system: Uranus (1781), Neptune (1846), and, now downgraded to a dwarf planet, Pluto (1930). The four planets closest to the sun—Mercury, Venus, Earth, and Mars—are called the terrestrial planets because they have solid rocky surfaces. Nearly every planet—and some of the moons—has an atmosphere. Moons, Rings, and Magnetospheres There are 140 known natural satellites, also called moons, in orbit around the various planets in our solar system, ranging from bodies larger than our own moon to small pieces of debris. From 1610 to 1977, Saturn was thought to be the only planet with rings. Most of the planets also have magnetic fields, which extend into space and form a magnetosphere around each planet.