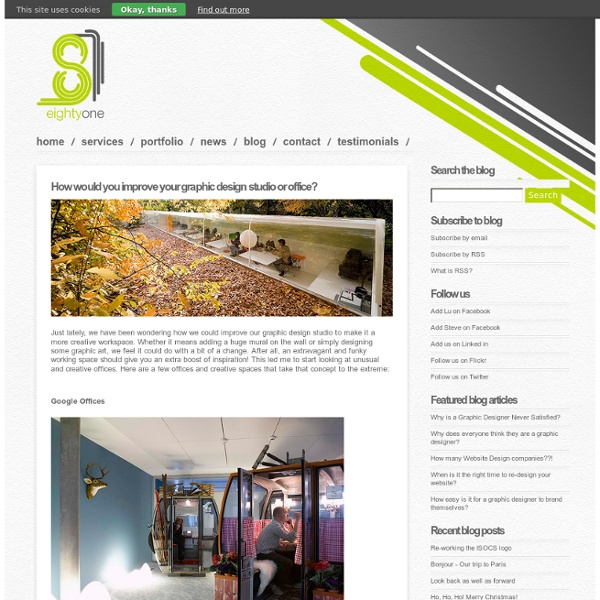 Just lately, we have been wondering how we could improve our graphic design studio to make it a more creative workspace. Whether it means adding a huge mural on the wall or simply designing some graphic art, we feel it could do with a bit of a change. After all, an extravagant and funky working space should give you an extra boost of inspiration! This led me to start looking at unusual and creative offices. Here are a few offices and creative spaces that take that concept to the extreme: Google Offices Pixar Offices Three Rings Design Offices Nike Offices Red Bull Offices ILSE Media Offices Cartoon Network Lego offices Ogilvy Offices Selgas Cano So if you could add anything to your graphic design studio or office, what would it be?

Space Saving Tiny Apartment, New York This tiny but highly sophisticated studio apartment in the East Village of NYC has made us very proud, thanks to JPDA. Not only was it built as a super efficient multi-functional unit but with the use of detailed mill work, the storage capacity was very cleverly executed and resulted in a super stylish studio with a decent amount of floor space. Shouldn’t all NYC dwellers aim to live like this? You decide… A schematic rendering demonstrates a realistic plan for this tiny apartment.

Cynicism Humorously Illustrated by Eduardo Salles Eduardo Salles (Mexico City, 1987) is advertiser, designer, illustrator, writer and professor at the Miami Ad School. And a professional procrastinator!, he says. Ex Creative Director of Nike, Kit Kat and Red Cross Mexico. 25 Ultra-Creative Packaging Designs From DeviantArt Web designers can (and should) draw inspiration from places other than web design, so today’s article is going to showcase 25 creative packaging designs that I found on Deviantart.com For anyone who hasn’t browsed through deviant art yet, you are missing out on a lot of creative inspiration. yes, the css galleries out there are good for inspiration, but I find myself searching sites like behance and deviant art much more lately, because of the diversity of designs and the fact that they don’t have to be “approved” before you see them. Do you know how many killer designs get submitted to css galleries every day, but never make it? With Deviant Art, you don’t run into that problem. So below are the 25 packaging designs I liked the most on deviant art. Drop a comment and let us know what your favorite(s) are.

Patchwork Orange: Art of Fixing Buildings with LEGO Blocks A missing brick here and chipped stone there show the normal marks of wear and tear on the structures and streets of a city, but filling them in with multi-colored LEGO bricks makes them stand out in sharp relief with their surroundings – especially in a place like Berlin. Titled ‘Dispatchwork’ (a linguistic play on ‘dispatching’ and ‘patching’ the holes), this is part urban art installation, part historical highlighting (since many of the gaps date back to World War II) and part method of calling attention to buildings that could use some help. Jan Vormann has been toying with LEGO pieces for a long time in various artistic capacities – as well as infilling structural holes with mirrors and other attention-getting materials. It may look haphazard at first, but there is an art to the process: identifying gaps is naturally subjective, and filling them in is both a creative and crafty act that can involve turning corners and working with existing structural details.

Dirt Poster « Whitezine Dirt Poster is a Design and Graphic-Design work made by Roland Reiner Tiangco, a new graduate of a Design School, living in New York. While handling the poster, your hands starts to get dirty, and this dirt allows you to see what’s the poster is all about. Check out also the artist’s Website. Dirt Poster Coolest Inventions Now days ~ Chulbulle.com Funny Pics : Hot Pictures Anonymous Says: June 11, 2011 6:53 PM They are truly unique. Anonymous Says: June 12, 2011 2:08 PM Only one or two of these are inventions. The rest are things that have existed for years that somebody felt like stylizing. Emergent Patterns: Game Wallpapers Beat Dull Wall Decor Repeating patterns are at the heart of most wallpapers, as they are part of the core of many simple, old-school, paper-and-pen games. While elementary in design (and execution), these basic black-and-white wallpaper designs feature an element of creative, unique and ultimately unpredictable emergent design that makes them grow more complex with tiime. The first layer – the original printed design – is as simple as it gets: a series of mazes, tic-tac-toe boards and crossword puzzles that naturally lend themselves to virtually infinite extension in any direction. Created by CinqCinq, these have been placed as the backdrops of art installations and waiting room interiors- perfect places to encourage spontaneous interaction. By setting out specific colors of pencil, pen, crayon or marker, the designer (or space owner) gets to exert another level of control but ultimately leaves the finished product in the hands of people who pass through a given space.

Anamorphic Sculptures London-based artist Jonty Hurwitz creates ‘Anamorphic Sculptures’ which only reveal themselves once facing a reflective cylinder. Hurwitz took an engineering degree in Johannesburg where he discovered the fine line between art and science. He has lived in England for many years, working in the online industry though he quietly levitated into the world of art inspired by a need to make ‘something real’. Hurwitz discovered that he could use science as an artistic paintbrush.

Creativity for the office An inspiring environment can greatly aid the creative process. It follows then, that those whose maintain 'round-the-clock creative jobs will benefit from inspirational surroundings. We asked the Mashable readership to submit images of their offices. From thought-bubble cocoons, to brainstorming walls, to a vegetable patch, we've rounded up photos of some amazing spaces that encourage employees to become visionaries. Browse the photo gallery to peek into the weird, wonderful and wacky work spaces companies use to brainstorm. Let us know in the comments which space you would find most inspiring.

A Pylon for the Future Finalists A competition to find a new design for the British electricity pylon, launched by RIBA, DECC and National Grid, has been short listed to just six concepts, which are now on show at an exhibition. Launched to coincide with the London Design Festival, the energy secretary opened the "A Pylon for the Future" display at the V&A in London. Judges chose the finalists from 250 entries, who have been working with the National Grid to build scale models of their designs. "Britain will see the equivalent of 20 new power stations constructed by 2020, and we need to transport this new, low carbon energy to our televisions and toasters, dishwashers and DVD players," Mr Huhne said. Small Attic Loft Apartment In Prague The design of this modern loft conversion located in Prague, Czech Republic uses natural materials such as stone, brick and wood to enhance the flat and angular surfaces. Designed by architect Dalibor Hlavacek, the two-storey attic loft makes good use of limited floor space. The living room, kitchen, bedroom and bathroom are on the lower floor. The upper gallery, accessible via staircase and a steel footbridge, creates an intimate space for the study, which can also be used as a second bedroom. Via: ArchDaily