Create a nice PDF e-book of tweets with tweetbook.in 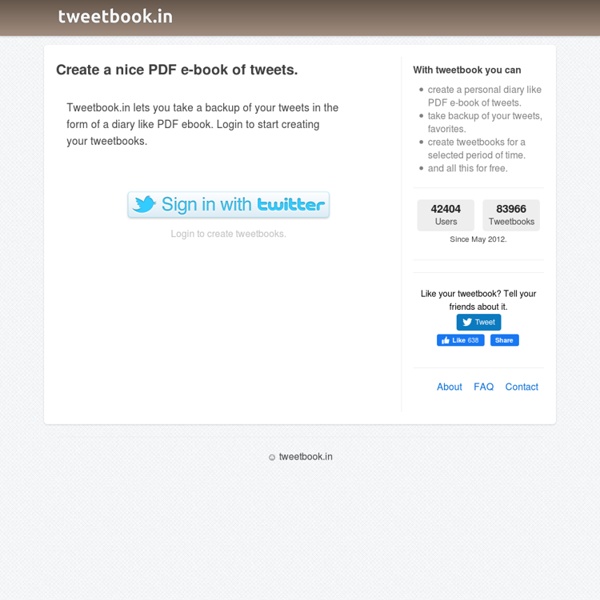 StoryMap JS The StoryMapJS editor uses your Google account for logging in, so that only you can edit your projects, and so that you don't need to remember another password. [ learn more ] Your StoryMap account currently has content from an older version of the StoryMap editor which will not work due to changes in the Google Drive API. In order to continue editing these older entries, please do the following: 1. Find the folder on your Google Drive called KnightLabStoryMap/public

Twitter: The Best PD For Educators Free, instantaneous and self-directed, social networks like Twitter carry enormous benefits for educators’ professional development. By following national experts and participating in worldwide chats, even skeptical teachers can share lessons, explore theories, and trade resources. Many simple ways exist for teachers to gain insights into eye-opening concepts, articles, and resources through cooperative technology. How To Backup Your Twitter Archive With the Twitter fail whale popping up all the time, you never know when something tragic might happen. No one want to lose all of their Twitter tweets, followers, or anything else for that matter. That’s why it’s a good idea to backup your Twitter archive on a regular basis in case of a Twitter mishap. As we all know, there has been numerous times in the past where users have lost followers, tweets, and DMs.

Twitter Itself Will Soon Decide the Value of Your Tweets Twitter is about to start attaching value ratings to users' tweets. The value judgements will be assigned to the public metadata of tweeters' posts, and used by Twitter's streaming API to help developers more selectively curate massive amounts of status updates. Designations of "none," "low" and "medium" will most likely debut on Feb. 20, according to a post by developer advocate Arne Roomann-Kurrik on the Twitter developers' blog. A "high" value option will be rolled out sometime after the initial batch. How exactly tweets will be ranked is not entirely clear, but Roomann-Kurrik says "medium" — and, later — "high" value posts will be roughly analogous to the "Top Tweets" results you get when you search a word or hashtag on Twitter.com.

Three Elements of Great Communication, According to Aristotle - Scott Edinger by Scott Edinger | 9:00 AM January 17, 2013 In my nearly 20 years of work in organization development, I’ve never heard anyone say that a leader communicated too much or too well. On the contrary, the most common improvement suggestion I’ve seen offered up on the thousands of 360 evaluations I’ve reviewed over the years is that it would be better if the subject in question learned to communicate more effectively. What makes someone a good communicator? There’s no mystery here, not since Aristotle identified the three critical elements — ethos, pathos, and logos. — thousands of years ago.

Ditch the grammar and teach children storytelling instead A report in the Times has quoted a secondary school teacher who complained that their year 7 intake no longer knew how to tell a story. “They knew what a fronted adverbial was, and how to spot an internal clause, and even what a preposition was – but when I set them a task to write a story, they broke down and cried,” reported the teacher. The fact that no importance is placed on storytelling makes me very frustrated not only because it puts so little value or emphasis on children’s creativity, but also because storytelling is more than simply an art – it is a crucial skill for life and commerce. Politicians should know this better than anyone.

100 Of The Best Twitter Tools For Teachers By Category In 2009, we shared our favorite tools for teachers on Twitter, with 100 resources for managing feeds, finding followers, and tackling classroom groups on the social media site. Since then, many tools have been revamped, replaced, or simply aren’t available anymore. Clearly, an update is in order, so we’re proud to present a new list for 2012, featuring the very best tools available to Twittering teachers today. 36 Twitter Resources: Advanced Twitter Search for Business Whether you decide to engage in social networking as a marketing strategy or not, Twitter has become a powerful tool to search and monitor your brand, your competitors, and for lead generation. Beyond the basic search on the Twitter home page you can use advanced search techniques to produce targeted information not easily found in a normal Google search. Want to know who’s talking about buying a new TV in Seattle? How about people discussing the terrible customer service they received from one of your competitors? Are you a journalist that needs case studies to report on? Whatever you’re looking for, chances are you can find the answer in real time and target that information for whatever area you like.