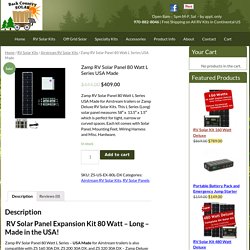 SolarLand 70W 12V Marine Skinny Solar Module, SLP070-12M. Quick guide for selecting the right charge controller Each time you charge deep cycle batteries with solar panels, it's necessary to use a charge controller in the circuit to protect the battery from over charging, and in some instances from over discharging. 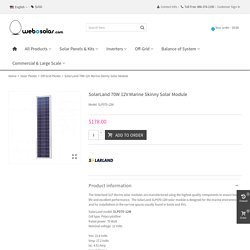 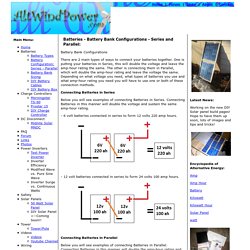 One is putting your batteries in Series, this will double the voltage and leave the amp-hour rating the same. The other is connecting them in Parallel, which will double the amp-hour rating and leave the voltage the same. Marine Wiring, Boat Cable and Electrical Genuinedealz.com. Electrical Tutorial - Chapter 7 - Batteries and Chargers. State of Charge: Your Camper/RV May Be Killing Your Battery Bank. If you own a camper or other recreational vehicle, it probably has a battery or two or at least is set up for a battery. 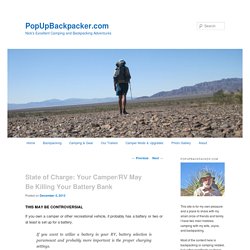 If you want to utilize a battery in your RV, battery selection is paramount and probably more important is the proper charging settings. Now if you only camp in campgrounds with umbilical cords to the power grid, you don’t need a battery bank. But I will suggest that you are missing a lot by “camping” in these virtual parking lots. Get thee out into the more wild areas where there is no electric grid. It is called camping, you know – not Parking. Most campers have a 12-volt electrical system allowing you to run a water pump and other conveniences; none of which are truly required for excellent camping. Milan Solar System. As with our last camper, the very first mod we did to our Milan was to install a solar system. 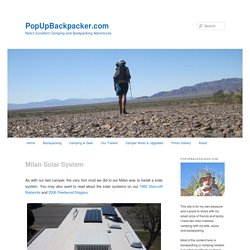 You may also want to read about the solar systems on our 1992 Starcraft Meteorite and 2006 Fleetwood Niagara. This install was more involved and contained some extra items we did not use in our previous campers. I did not take a lot of pictures because my focus was on a quality installation, not documentation. Below is a list of what we added to the camper. Before installing anything, I put together a wiring schematic. Good news is that everything worked the first time. 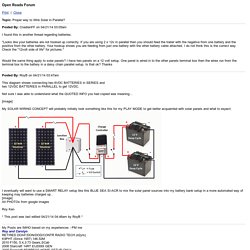 If you are really trying to balance the bank then you also need to pay attention to the size of the wiring and the length of each wire, but that is beyond the scope of this answer. How to: Connect two batteries in parallel. Like most things there is a right way and a wrong way of doing it and one that I receive emails about is how to connect two batteries in parallel and get even more people finding the site by asking the question on Google. 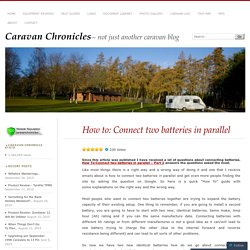 So here is a quick “How To” guide with some explanations on the right way and the wrong way. Most people who want to connect two batteries together are trying to expand the battery capacity of their existing setup. One thing to remember, if you are going to install a second battery, you are going to have to start with two new, identical batteries. Same make, Amp hour (Ah) rating and if you can the same manufacture date. Connecting batteries with different Ah ratings or from different manufactures is not a good idea as it can/will lead to one battery trying to charge the other (due to the internal forward and reverse resistance being different) and can lead to all sorts of other problems. OK, that will work. Progressive Dynamics (PD4645V) 45 Amp Converter/Charger with Built-In Charge Wizard: Automotive. RV Recreational Vehicle Motor Home Motorcoach Batteries Lifeline Free Shipping - Wholesale Batteries Direct. 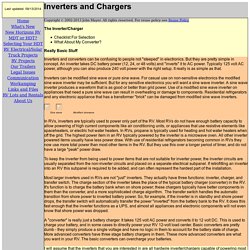 All rights reserved. For reuse policy see Reuse Policy The Inverter/Charger Checklist For Selection What About My Converter? Really Basic Stuff Inverters and converters can be confusing to people not "steeped" in electronics. Inverters can be modified sine wave or pure sine wave. Sine wave Modified sinewave In RVs, inverters are typically used to power only part of the RV. To keep the inverter from being used to power items that are not suitable for inverter power, the inverter circuits are usually separated from the non-inverter circuits and placed on a separate electrical subpanel.

Most larger inverters used in RVs are not "just" inverters. A "converter" is really just a battery charger. I will assume that the inverters that you are interested in are all hardwire inverter/chargers capable of powering most of the appliances in your RV. This puts your choices in the category of higher-cost inverter/chargers. Lower Cost Inverters Load Sharing. Amazon.com: Instapark® ZJ-03-W Universal Solar Panel 4-Corner Drill-free Glue Mounting Brackets, Color White, 4-pack: Car Electronics. GS100 Solar Panel. ESS-12V, 2.0 kWhr.