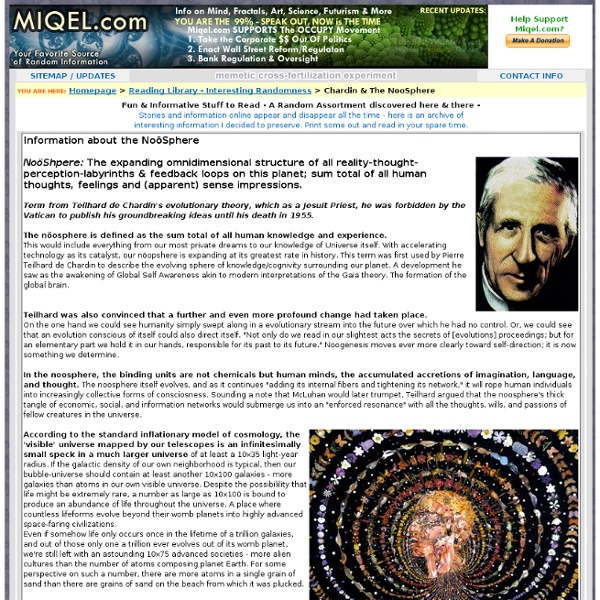 Cyberspace and Philosophy The mind-body problem has been called the greatest question in the history of human thought. It can be phrased as, "How does the physical brain give rise to the psychological mind?" This question was first widely investigated by Descartes, who intending to extend mathematical methods to all areas of human knowledge, discarded the authoritarian systems of the scholastic philosophers and began with universal doubt. Only one thing cannot be doubted: doubt itself. Therefore, the doubter must exist. Dualism was contested by Descartes's contemporary Thomas Hobbes. These two traditional theories, dualism and materialism, still dominate discussion of the mind-body problem. The connection between the mind-body problem and the future of Neuromancer may not be obvious. Cyberspace and Neuroscience.

Panchatantra Ancient Sanskrit text of animal fables from India The first page of oldest surviving Panchatantra text in Sanskrit[1] An 18th-century Pancatantra manuscript page in Braj dialect of Hindi (The Talkative Turtle) The Panchatantra (IAST: Pañcatantra, Sanskrit: पञ्चतन्त्र, "Five Treatises") is an ancient Indian collection of interrelated animal fables in Sanskrit verse and prose, arranged within a frame story.[2] The surviving work is dated to roughly 200 BCE, based on older oral tradition.[3][4] The text's author is unknown, but has been attributed to Vishnu Sharma in some recensions and Vasubhaga in others, both of which may be pen names.[3] It is classical literature in a Hindu text,[3][5] and based on older oral traditions with "animal fables that are as old as we are able to imagine".[6] It is "certainly the most frequently translated literary product of India",[7] and these stories are among the most widely known in the world.[8] It goes by many names in many cultures. Content[edit] Others

Emergence If we were pressed to give a definition of emergence, we could say that a property is emergent if it is a novel property of a system or an entity that arises when that system or entity has reached a certain level of complexity and that, even though it exists only insofar as the system or entity exists, it is distinct from the properties of the parts of the system from which it emerges. However, as will become apparent, things are not so simple because “emergence” is a term used in different ways both in science and in philosophy, and how it is to be defined is a substantive question in itself. The term “emergence” comes from the Latin verb emergo which means to arise, to rise up, to come up or to come forth. The term was coined by G. Effects are resultant if they can be calculated by the mere addition or subtraction of causes operating together, as with the weight of an object, when one can calculate its weight merely by adding the weights of the parts that make it up. Table of Contents

Guide to Philosophy on the Internet (Suber) Welcome to my collection of online philosophy resources. If you are stuck in a frame, click here to escape. If you are a frequent visitor, press reload or refresh on occasion to be sure that you are viewing the most recent version of the page, not the version cached on your hard drive from your last visit. I've marked recommended sites with a red star . When the whole file loads, use the search command on your browser to find items by keyword. To register to receive an email announcement whenever this page is revised, see the bottom of this file. If speed is a problem, try one of the mirror sites in Germany (München, single-file version) or Italy (Bari, single-file version), or Italy (Bari, multi-file version). About this guide. I welcome URLs for inclusion, notice of broken links, and suggestions and comments of all kinds. If you're interested in guides like this to disciplines other than philosophy, see my list of lists of them.

American Buddhist Journal: Search results for brain Dharmachari Seven, Wisdom Quarterly (originally composed Sept. 7, 2008, updated March 4, 2012 inspired by Kalyani) dedicated to Gina Marie Guarnieri (n-s-d.com) According to the Buddhist theory of mind (in Abhidharma or Buddhist Psychology), there are eight factors that together comprise a human being: The first four are collectively known as "body." These are the Four Great Elements or qualities of materiality, the maha-bhuta (dhatu, elements). They are most frequently referred to as the aggregate of "form" (the rupa in namarupa, "mind and form"). (1) form:Earth (solidity, hardness, softness)Fire (temperature, ripeness, heat, cold) Water (cohesion, liquidity, flowing)Wind (motion, distension, support) At a subatomic level, the Abhidharma speaks of "particles of perception" (kalapas) or units that together build up to form the various qualities of matter. (LiveScience.com) The second four are collectively known as "mind." Brain vs. (bryanedwards.coml) (connellychiro) Depression: Mind or Body?

Spirituality, Religion, Culture, and Peace: Exploring the Foundation for Inner-Outer Peace in the Twenty-First Century - Groff and Smoker Linda Groff California State University Paul Smoker Antioch College "If a man sings of God and hears of Him, And lets love of God sprout within him, All his sorrows shall vanish, And in his mind, God will bestow abiding peace." Introduction This paper is about different spiritual and religious traditions in the world and how they have or could in the future contribute to the creation of a global culture of peace. Traditionally many people focus on how wars and conflicts are seemingly undertaken for religious reasons, or at least undertaken in the name of religion. I. Part I begins by providing a framework for looking at all the world's religions as having a potential spectrum of perspectives, including: the external, socially-learned, cultural or exoteric part --including different religious organizations, rituals, and beliefs, which are passed down from one generation to the next, and the internal, mystical, direct spiritual experience or esoteric part. II. III. IV. 1. 2. 3. 1. 2. 3.