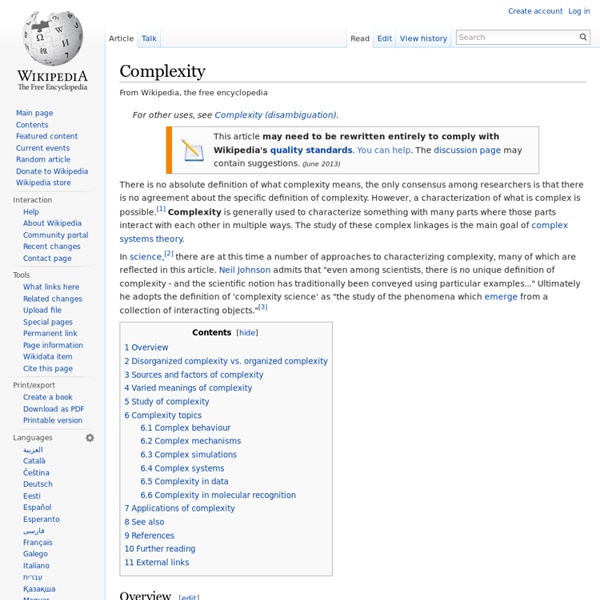 There is no absolute definition of what complexity means, the only consensus among researchers is that there is no agreement about the specific definition of complexity. However, a characterization of what is complex is possible.[1] Complexity is generally used to characterize something with many parts where those parts interact with each other in multiple ways. The study of these complex linkages is the main goal of complex systems theory. In science,[2] there are at this time a number of approaches to characterizing complexity, many of which are reflected in this article. Neil Johnson admits that "even among scientists, there is no unique definition of complexity - and the scientific notion has traditionally been conveyed using particular examples..." Overview[edit] Definitions of complexity often depend on the concept of a "system"—a set of parts or elements that have relationships among them differentiated from relationships with other elements outside the relational regime.

Complexity The complexity of a physical system or a dynamical process expresses the degree to which components engage in organized structured interactions. High complexity is achieved in systems that exhibit a mixture of order and disorder (randomness and regularity) and that have a high capacity to generate emergent phenomena. Complexity across Scientific Disciplines Despite the importance and ubiquity of the concept of complexity in modern science and society, no general and widely accepted means of measuring the complexity of a physical object, system, or process currently exists. The lack of any general measure may reflect the nascent stage of our understanding of complex systems, which still lacks a general unified framework that cuts across all natural and social sciences. While a general measure has remained elusive until now, there is a broad spectrum of measures of complexity that apply to specific types of systems or problem domains. General Features of Complexity Components. Emergence.

Thinking Enterprise Simple animation 1, aircraft radial engine 2, oval Regulation 3, sewing machines 4, Malta Cross movement - second hand movement used to control the clock 5, auto change file mechanism 6, auto constant velocity universal joint 6.gif 7, gun ammunition loading system 8 rotary engine - an internal combustion engine, the heat rather than the piston movement into rotary movement # Via World Of Technology. 1, inline engine - it's cylinders lined up side by side 2, V-type engine - cylinder arranged at an angle of two plane 3, boxer engine - cylinder engine arranged in two planes relative Living Code: The importance of visual programming Python has a well-earned reputation for being easy to use and to learn, at least for people who have learned programming in other languages first. Lately my kids have been very interested in programming, and I've found that Python doesn't come as easily to 6-11 year olds as it does to adult programmers. So I see two approaches to this problem, if it is a problem. One, let them use other languages than Python. Two, find (or make) ways for Python to be more approachable. Let's look at both of these. Scratch For languages other than Python, there are some really good choices. Learn more about this project Scratch is great for learning and for sharing. One option that is often suggested as a step up from Scratch is GameMaker, which apparently is a very nice commercial system that lets kids build games. Quartz Composer Another interesting system we've been playing around with lately is Quartz Composer. eToys One more tool we've begun to explore is Squeak/eToys. . Turtles Turning now to Python.

Instances of Fractal Evolution « Mindsoul’s Weblog When couple of years ago (Nov 2006) I experienced author and biologist Dr. Bruce Lipton‘s 2-day presentation in his seminar produced by Spirit 2000 in San Francisco, I was totally blown away by the depth of insight I got into how my biology, my health, and how my health at the cellular level, is in my complete control through my beliefs (both conscious and subconscious). But one new thing Bruce added at the end of his presentation was his talk about how patterns of life and evolution are similar to patterns of fractal geometry. Dr. Fractal Geometry Fractal geometry is derived by a recursive mathematical formulas, and incredible shapes were produced when computers were strong and fast enough to be able to execute these very computing-intensive formulas. Concept of Fractal Evolution is that evolution follows a similar pattern, meaning “pattern of the whole is seen in the parts of the whole” quoting from Dr. Digital Technology and Unified Field Theory Dr. Evolution of the Web Like this: