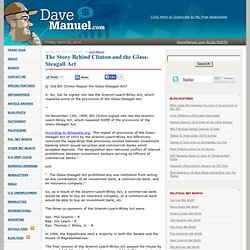 The deregulation also removed conflict of interest prohibitions between investment bankers serving as officers of commercial banks. " and "…The Glass-Steagall Act prohibited any one institution from acting as any combination of an investment bank, a commercial bank, and an insurance company. " Pat Robertson Quotes - Stupid Pat Robertson Quotes. Jerry Falwell Involved in Pornography Scandal. LYNCHBURG, VA – August 1st, 2005.

F.B.I. officials raided fundementalist Baptist minister Jerry Falwell’s Virginia home at 9:00a.m. F.B.I. agent Mark Mathers received an anonymous tip that Falwell had been filming pornographic movies in his home and then posting them on various websites under the pseudonym Dick Dangling. Mathers insists that he does not know the identity of his source. However, Falwell’s attorneys are making allegations that Larry Flynt was the mastermind behind the entire scandal in an attempt to frame Falwell. When asked to comment, Flynt said, “If I knew Jerry was making films, I would have gave him a job.” When officials searched Falwell’s home, they found not only homemade pornographic videos in Falwell? Falwell was also arrested on drug charges. Falwell, as of this moment, is being held in the Virginia state prison where he awaits to stand trial. 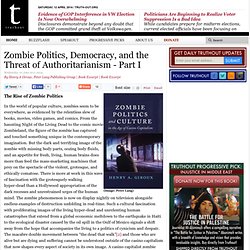 A Colossal Fracking Mess. Fracking is an energy- and resource-intensive process. 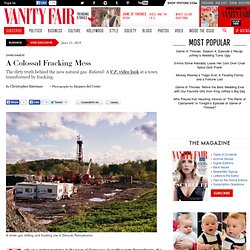 Every shale-gas well that is fracked requires between three and eight million gallons of water. Fleets of trucks have to make hundreds of trips to carry the fracking fluid to and from each well site. Due in part to spotty state laws and an absence of federal regulation, the safety record that hydraulic fracturing has amassed to date is deeply disturbing. As use of the technique has spread, it has been followed by incidents of water contamination and environmental degradation, and even devastating health problems.

Thousands of complaints have been lodged with state and federal agencies by people all over the country whose lives and communities have been transformed by fracking operations. What A ‘Party’ August 6, 2001: President George W. 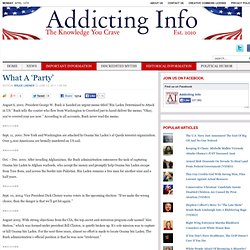 Bush is handed an urgent memo titled “Bin Laden Determined to Attack in US.” Bush tells the courier who flew from Washington to Crawford just to hand-deliver the memo; “Okay, you’ve covered your ass now.” According to all accounts, Bush never read the memo. Sept. 11, 2001: New York and Washington are attacked by Osama bin Laden’s al Qaeda terrorist organization. Over 3,000 Americans are brutally murdered on US soil. Oct. – Dec. 2001: After invading Afghanistan, the Bush administration outsources the task of capturing Osama bin Laden to Afghan warlords, who accept the money and promptly help Osama bin Laden escape from Tora Bora, and across the border into Pakistan. Sept. 10, 2004: Vice President Dick Cheney warns voters in the upcoming election: “If we make the wrong choice, then the danger is that we’ll get hit again.” Osama bin Laden continued to kill innocent people around the world for an additional six years.

A TIMELINE OF THE IRAQ WAR. MARCH 19, 2003: Bush launches invasion of Iraq MARCH 30, 2003: Donald Rumsfeld: We know where the WMD are We know where [the weapons of mass destruction] are. They’re in the area around Tikrit and Baghdad and east, west, south and north somewhat. [ABC This Week, 3/30/03 ] APRIL 1, 2003: Pfc. APRIL 9, 2003: Saddam Statue Toppled The Los Angeles Times later reported that the fall was “stage-managed” by the Army. APRIL 11, 2003: Donald Rumsfeld: Stuff happens Think what’s happened in our cities when we’ve had riots, and problems, and looting.

APRIL 16, 2003: Bush signs $79 billion supplemental spending bill for Iraq [DoD, 4/16/03 ] APRIL 23, 2003: USAID Administrator Andrew Nastios Claims Rebuilding of Iraq Could Be Accomplished With $1.7 Billion TED KOPPEL: I mean, when you talk about 1.7, you’re not suggesting that the rebuilding of Iraq is gonna be done for $1.7 billion? MAY 1, 2003: Mission Accomplished [M]y fellow Americans: Major combat operations in Iraq have ended.

Ladies and gentlemen. Fracking Across the United States. Causes and Context of Sexual Abuse Minors by US Catholic Priests 1950 201051211.