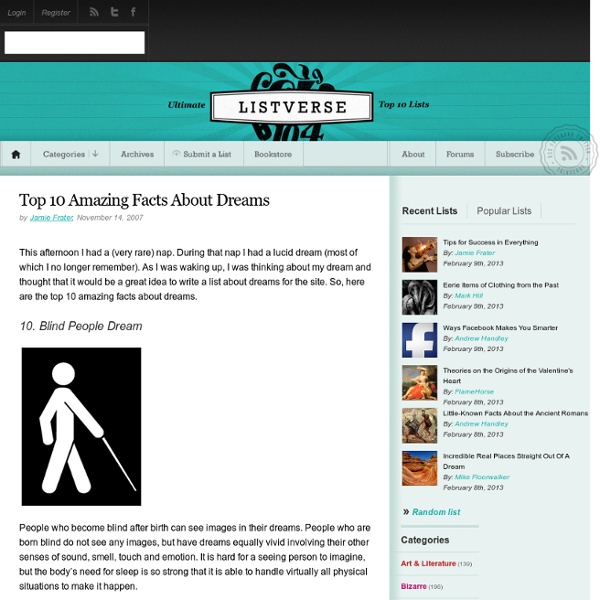 Facts This afternoon I had a (very rare) nap. During that nap I had a lucid dream (most of which I no longer remember). As I was waking up, I was thinking about my dream and thought that it would be a great idea to write a list about dreams for the site. 10. People who become blind after birth can see images in their dreams. 9. Within 5 minutes of waking, half of your dream if forgotten. In Xanadu did Kubla Khan A stately pleasure-dome decree: Where Alph, the sacred river, ran Through caverns measureless to man Down to a sunless sea. [...] Curiously, Robert Louis Stevenson came up with the story of Doctor Jeckyll and Mr. 8. Every human being dreams (except in cases of extreme psychological disorder) but men and women have different dreams and different physical reactions. 7. 6. 5. A full 12% of sighted people dream exclusively in black and white. 4. If you dream about some particular subject it is not often that the dream is about that. 3. 2. 1. Bonus: Extra Facts 1. Jamie Frater

5 Mind-Bending Facts About Dreams | Lucid Dreams & Nightmares When your head hits the pillow, for many it's lights out for the conscious part of you. But the cells firing in your brain are very much awake, sparking enough energy to produce the sometimes vivid and sometimes downright haunted dreams that take place during the rapid-eye-movement stage of your sleep. Why do some people have nightmares while others really spend their nights in bliss? Like sleep, dreams are mysterious phenomena. But as scientists are able to probe deeper into our minds, they are finding some of those answers. Here's some of what we know about what goes on in dreamland. 1. As if nightmares weren't bad enough, a rare sleep disorder — called REM sleep behavior disorder — causes people to act out their dreams, sometimes with violent thrashes, kicks and screams. 2. Staying up late has its perks, but whimsical dreaming is not one of them. In the study 264 university students rated how often they experienced nightmares on a scale from 0 to 4, never to always, respectively. 3.

13 Interesting Facts about Dreams | Tasty Human Dreaming is one of the most mysterious experiences in our lives. During the Roman Era, some dreams were submitted to the Roman Senate for analysis and dream interpretation. They were thought to be messages from the gods. Dream interpreters even accompanied military leaders into battles and campaigns! In addition we know, that many artists have received their creative ideas from their dreams. But what do we know about dreams? 1. Within 5 minutes of waking, half of your dream is forgotten. 2. People who became blind after birth can see images in their dreams. 3. Every human being dreams (except in cases of extreme psychological disorder). 4. Our mind is not inventing faces – in our dreams we see real faces of real people that we have seen during our life but may not know or remember. 5. A full 12% of sighted people dream exclusively in black and white. 6. If you dream about some particular subject it is not often that the dream is about that. 7. 8. 9. 10. 11. 12. 13. And for the end:

Over 100 Incredible Infographic Tools and Resources (Categorized) This post is #6 in DailyTekk’s famous Top 100 series which explores the best startups, gadgets, apps, websites and services in a given category. Total items listed: 112. Time to compile: 8+ hours. Follow @DailyTekk on Twitter to make sure you don’t miss a week! Update: Be sure to check out our latest post on infographics: Infographics Are Everywhere – Here’s How to Make Yours Go Viral. I love a good infographic! There’s more to this article!

Facts About Dreams Facts About Dreams (1961) Thinking About Becoming A Psychology Student? Find A Psychology School Near You Facts About Dreams All of us know we need sleep. With completely new methods for looking into what goes on in our minds at night, they have been upsetting a great many old misconceptions and superstitions, discovering one fascinating fact after another, and building up a whole new science of dreams. Research Shows That All of us Dream Every Night And not just one dream, either. That's clear from years of research. To find out more, the Chicago investigators had adult volunteers sleep on cots in the laboratory and stuck tiny electrodes on their eye sockets so electric recordings could be made of eye movements. Could the brain and eye activity indicate dreaming? Although investigators haven't been able to monitor the sleep of everybody in the country, the evidence that everybody dreams every night is strong. Why We Forget Many of our Dreams We're ashamed of them - so we suppress them.

Learning Visually | Living the Dream Infographics work in the classroom because they grab students and allow an entry point to learning — and because they sum up pages and pages, even chapters, of information that would take a reader hours to process. Interactive infographics make kids want to immediately start clicking around to see what’s what. For a teacher who prioritizes an inquiry-driven classroom, that’s a great starting point. Infographics and Data visualization are not just for consumption though, teachers and students can also challenge the learning process by creating original graphics for themselves. Go here –> Consuming the information is one portion of the equation when discussing data visualization. There are elements of design to evaluate as well as functionality/clarity of purpose. … classroom examples of consumption graphics … classroom examples of interactive consumption graphics Tools for creation… Data to play with…