Info for the sake of Info

100 Military Manuals You Can Download for Free. Justin KingMay 11, 2015 (TFC) Washington, DC – Often times people who want to have more thorough training in order to better protect themselves from harm, or to survive a disaster, simply do not know where to find the information they need. 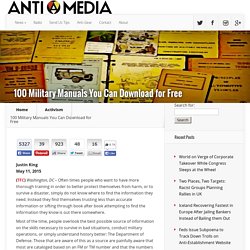 Instead they find themselves trusting less than accurate information or sifting through book after book attempting to find the information they know is out there somewhere. Most of the time, people overlook the best possible source of information on the skills necessary to survive in bad situations, conduct military operations, or simply understand history better: The Department of Defense. How To Escape If Someone Zip Ties Your Wrists.

How To Escape If Someone Zip Ties Your Wrists Posted on Updated on You never know when you could end up in zip tie cuffs. 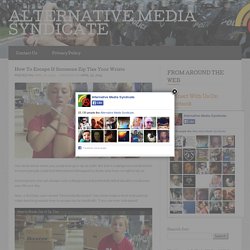 We live in a dangerous world where innocent people could find themselves kidnapped by those who have no right to do so. Knowing how one can escape such a dangerous and potentially lethal situation could save your life one day. Now, a YouTube user named “Almond Butterscotch” has come made a short instructional video teaching people how to escape zip tie handcuffs, “if you are ever kidnapped.” The girl in the video added a disclaimer that one should “use this technique at your own risk” and that “rape is never cool or funny.” This sheds some light on her motivation for putting out the video.

But there are many other circumstances where this technique could save your ass. 24 Mind-Blowing Facts About Marijuana Production in America. The only thing green about that bud is its chlorophyll. 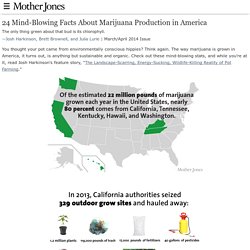 You thought your pot came from environmentally conscious hippies? Think again. The way marijuana is grown in America, it turns out, is anything but sustainable and organic. 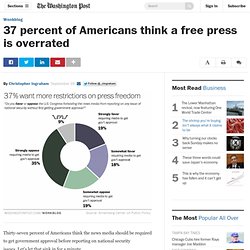 Let's let that sink in for a minute. That finding is from an Annenberg Public Policy Center poll that found Americans generally know little about the structure and functions of government. Only one-third, for instance, could name all three branches of government. Another third couldn't name any. This lack of knowledge partly explains why nearly four in 10 Americans think Congress should pass a law in direct contradiction of the First Amendment, which reads in part: "Congress shall make no law respecting an establishment of religion, or prohibiting the free exercise thereof; or abridging the freedom of speech, or of the press... " Other contributing factors include the reporting of the Edward Snowden leaks, which 44 percent of Americans said "harmed public interest. " Overcoming the Shock Doctrine. Translated by Stacco Troncoso, edited by Jane Loes Lipton – Guerrilla Translation! 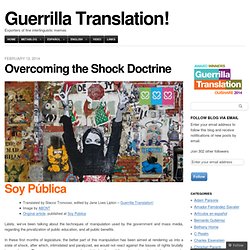 Image by ABCNTOriginal article, published at Soy Pública Lately, we’ve been talking about the techniques of manipulation used by the government and mass media, regarding the privatization of public education, and all public benefits. In these first months of legislature, the better part of this manipulation has been aimed at rendering us into a state of shock, after which, intimidated and paralyzed, we would not react against the losses of rights brutally imposed on us. 'I've Built Robots': Homeless People In Poignant Video Remind Us It Can Happe...

Brain. 7 Ways That You (Yes, You) Could End Up On A Terrorist Watch List. Earlier this week, The Intercept published a 166-page document outlining the government's guidelines for placing people on an expansive network of terror watch lists, including the no-fly list. 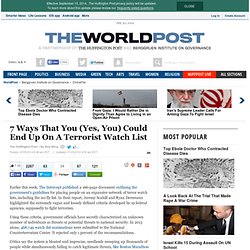 In their report, Jeremy Scahill and Ryan Devereaux highlighted the extremely vague and loosely defined criteria developed by 19 federal agencies, supposedly to fight terrorism. Using these criteria, government officials have secretly characterized an unknown number of individuals as threats or potential threats to national security. In 2013 alone, 468,749 watch-list nominations were submitted to the National Counterterrorism Center. It rejected only 1 percent of the recommendations.

Making a Killing with Cancer: A 95.5 Billion Dollar Industry. If you had a business selling something that made you well over a hundred billion dollars per year, would you take steps to eradicate the need for your business? 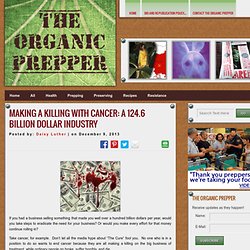 Or would you make every effort for that money continue rolling in? Take cancer, for example. Don’t let all the media hype about “The Cure” fool you. No one who is in a position to do so wants to end cancer because they are all making a killing on the big business of treatment, while ordinary people go broke, suffer horribly, and die. There will never be a “cure” brought to market because there just isn’t enough profit in eradicating the disease entirely. The Grim Statistics Just the word “cancer” sends a frisson of fear down the spine of the most stalwart optimist. Nearly half of all Americans will develop cancer in their lifetime.

This is a fairly recent increase. It’s being normalized. Why? Because, cancer is big business and those who are profiting have great financial interest in seeing the deadly trend continue to increase. Your Anon News — Round up: Spying, Drones, Spills Everywhere, Increasing Cyberattacks, and Globalized Revolt.