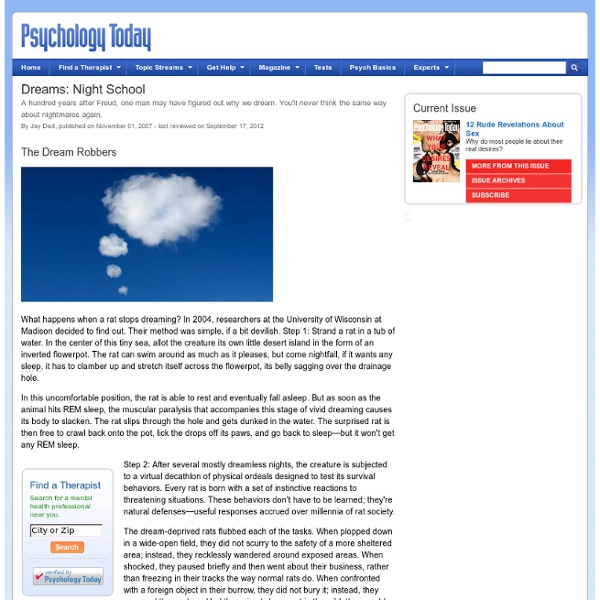 The Dream Robbers What happens when a rat stops dreaming ? In 2004, researchers at the University of Wisconsin at Madison decided to find out. Their method was simple, if a bit devilish. In this uncomfortable position, the rat is able to rest and eventually fall asleep. Step 2: After several mostly dreamless nights, the creature is subjected to a virtual decathlon of physical ordeals designed to test its survival behaviors. The dream-deprived rats flubbed each of the tasks. The surprise came during Step 3. What Dreams Are Made Of Dreaming is so basic to human existence, it's astonishing we don't understand it better. Later came the idea that dreams are the cognitive echoes of our efforts to work out conflicting emotions. "There's nothing closer to a consensus on the purpose and function of dreaming than there's ever been," says Deirdre Barrett, a Harvard psychologist and editor of the forthcoming . A Theater of Threats Dreams may do the same thing.

7 Helpful Tips To Immediately Increase Your Confidence Your rating: None Average: 3.7 (6 votes) 1.) Ask yourself, “What’s the worst that could happen?” 2.) 3.) 4.) 5.) 6.) 7.) Author's Bio: This article is based on the book, “Unstoppable Confidence” by Kent Sayre. 8 Things Everybody Ought to Know About Concentrating “Music helps me concentrate,” Mike said to me glancing briefly over his shoulder. Mike was in his room writing a paper for his U.S. History class. On his desk next to his computer sat crunched Red Bulls, empty Gatorade bottles, some extra pocket change and scattered pieces of paper. In the pocket of his sweat pants rested a blaring iPod with a chord that dangled near the floor, almost touching against his Adidas sandals. Mike made a shift about every thirty seconds between all of the above. Do you know a person like this? The Science Behind Concentration In the above account, Mike’s obviously stuck in a routine that many of us may have found ourselves in, yet in the moment we feel it’s almost an impossible routine to get out of. When we constantly multitask to get things done, we’re not multitasking, we’re rapidly shifting our attention. Phase 1: Blood Rush Alert When Mike decides to start writing his History essay, blood rushes to his anterior prefrontal cortex. Phase 2: Find and Execute

How the Brain Stops Time One of the strangest side-effects of intense fear is time dilation, the apparent slowing-down of time. It's a common trope in movies and TV shows, like the memorable scene from The Matrix in which time slows down so dramatically that bullets fired at the hero seem to move at a walking pace. In real life, our perceptions aren't keyed up quite that dramatically, but survivors of life-and-death situations often report that things seem to take longer to happen, objects fall more slowly, and they're capable of complex thoughts in what would normally be the blink of an eye. Now a research team from Israel reports that not only does time slow down, but that it slows down more for some than for others. Anxious people, they found, experience greater time dilation in response to the same threat stimuli. An intriguing result, and one that raises a more fundamental question: how, exactly, does the brain carry out this remarkable feat? Was it scary enough to generate a sense of time dilation?

Eyes body language Techniques > Use of body language > Parts-of-the-body language > Eyes body language Up | Down | Sideways | Gazing | Glancing | Eye contact | Staring | Squinting | Blinking | Winking | Closing | Damp | Tears | Pupil size | Rubbing | See also The eyes are often called, with some justification, 'the windows of the soul' as they can send many different non-verbal signals. For reading body language this is quite useful as looking at people's eyes are a normal part of communication (whilst gazing at other parts of the body can be seen as rather rude). When a person wears dark glasses, especially indoors, this prevents others from reading their eye signals. It is consequently rather disconcerting, which is why 'gangsters' and those seeking to appear powerful sometimes wear them. Looking up When a person looks upwards they are often thinking. When they are delivering a speech or presentation, looking up may be their recalling their prepared words. Looking down Looking sideways Lateral movement Gazing

Highly Sensitive People Emotional Problems - Are You Too Sensitive Photo Credit: George Doyle/Stockbyte Many years ago I had a falling-out with a girlfriend that proved so painful, I can hardly talk about it today. My friend (let's call her Mary) was a colorful television personality and had the world at her feet. She was engaged to a handsome European, and her face was plastered across the newspapers. I was working for 60 Minutes at the time, and we often met for lunch. Then one day her show was canceled and she asked me — casually, as though it didn't really matter — if I'd put her forward as a reporter for 60 Minutes. Mary never spoke to me again. Though I didn't know it then, I too am an HSP, and have since learned to identify a range of HSP behaviors and responses, both in myself and in others. HSPs are hardwired differently than the rest of the population. Once upon a time, HSPs might have been written off as shy or even neurotic, but Aron believes these labels are demeaning and inaccurate. Still, not everyone is buying.

Gerard Keegan's Psychology Site: Psychology Art Psychology Art Gallery Here we have various fascinating pictures with a psychological connection. These pictures have been circling the globe via email to promote breast cancer awareness. As far as we are aware they are public domain however if you know different, please contact us immediately. How many Deer? How many Faces? How many Horses? Jigsaw Mobius ring Movement How many people? A Roman and some impossible architecture Ships - really nice Esher style work Who is the tallest? A fascinating town Two faces and more A very well done Esher style waterfall Do you find this hard to read?

Revenge of the Introvert After ten years as a psychologist practicing psychodynamic psychotherapy , I reclined on the couch of my own analyst feeling burdened by my chosen work. After a day of seeing patients, I was drained. I had been trained to listen at many levels—words, emotions, unconscious disclosures—and I took all of that in and sorted it out in my mind. I was good at helping others discover and pursue what they wanted out of life. But at day's end I had no resources left to do it for myself. Then I heard myself say: "I don't like being a therapist." Suddenly I felt free, loosed from expectations that never fit. As a card-carrying introvert , I am one of the many people whose personality confers on them a preference for the inner world of their own mind rather than the outer world of sociability. Over the past two decades, scientists have whittled down to five those clusters of cognitions, emotions, motivations, and behaviors that we mean by "personality" factors. Introversion in Action

The Brain—Information about the Brain 1 Introduction “I think, therefore I am.” —René Descartes, 17th-century philosopher Few of us question the crucial importance of the brain. It is vital to our existence. Our brains enable us to think, as René Descartes so skillfully pointed out nearly 400 years ago. The brain makes up only 2 percent of our body weight, but it consumes 20 percent of the oxygen we breathe and 20 percent of the energy we consume. Scientists have worked for many years to unravel the complex workings of the brain. Despite these and other significant advances in the field of brain research, most of the processes responsible for the integrated functioning of billions of brain cells remain a mystery. An essential aspect of any scientific research is communicating results to the public in a way that is easily understood. To correctly interpret the information transmitted through these venues, we need a better understanding of basic concepts related to the brain. 2 Myths and Realities about the Brain Figure 1.