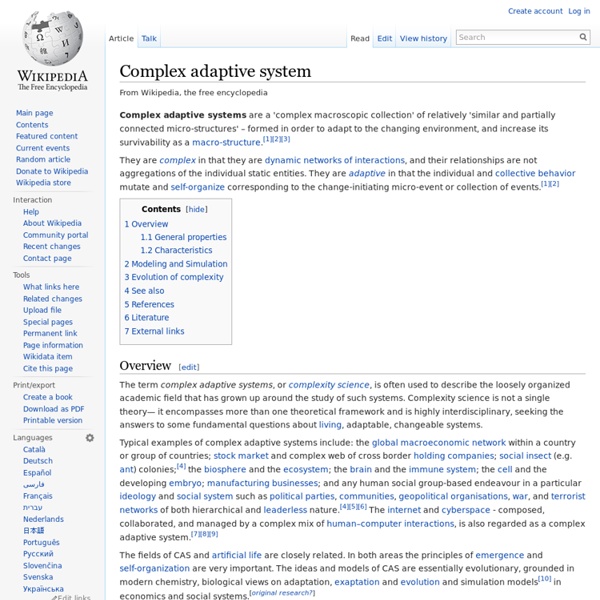 They are complex in that they are dynamic networks of interactions, and their relationships are not aggregations of the individual static entities. They are adaptive in that the individual and collective behavior mutate and self-organize corresponding to the change-initiating micro-event or collection of events.[1][2] Overview[edit] The term complex adaptive systems, or complexity science, is often used to describe the loosely organized academic field that has grown up around the study of such systems. Complexity science is not a single theory— it encompasses more than one theoretical framework and is highly interdisciplinary, seeking the answers to some fundamental questions about living, adaptable, changeable systems. The fields of CAS and artificial life are closely related. The study of CAS focuses on complex, emergent and macroscopic properties of the system.[3][11][12] John H. General properties[edit] Characteristics[edit] Robert Axelrod & Michael D. Modeling and Simulation[edit]

Complex systems Complex systems present problems both in mathematical modelling and philosophical foundations. The study of complex systems represents a new approach to science that investigates how relationships between parts give rise to the collective behaviors of a system and how the system interacts and forms relationships with its environment.[1] Such systems are used to model processes in computer science, biology,[2] economics, physics, chemistry,[3] and many other fields.

Emergence In philosophy, systems theory, science, and art, emergence is a process whereby larger entities, patterns, and regularities arise through interactions among smaller or simpler entities that themselves do not exhibit such properties. Emergence is central in theories of integrative levels and of complex systems. For instance, the phenomenon life as studied in biology is commonly perceived as an emergent property of interacting molecules as studied in chemistry, whose phenomena reflect interactions among elementary particles, modeled in particle physics, that at such higher mass—via substantial conglomeration—exhibit motion as modeled in gravitational physics. Similarity between characteristics of a complex adaptive system and a wicked problem: Anecdote Posted by Shawn Callahan - January 25, 2005Filed in Uncategorized I’ve just been reading about wicked problems and I’m struck by the similarities between the characteristics of a complex system and how Rittel and Webber defined a wicked problem back in 1973. Jeff Conklin nicely summarises wicked problems as follows: You don’t understand the problem until you have developed a solution. Indeed, there is no definitive statement of “The Problem.”

Austrian School The Austrian School is a school of economic thought that is based on methodological individualism.[1][2][3][4] It originated in late-19th and early-20th century Vienna with the work of Carl Menger, Eugen von Böhm-Bawerk, Friedrich von Wieser, and others.[5] Current-day economists working in this tradition are located in many different countries, but their work is referred to as Austrian economics. Among the theoretical contributions of the early years of the Austrian School are the subjective theory of value, marginalism in price theory, and the formulation of the economic calculation problem, each of which has become an accepted part of mainstream economics.[6] Many economists are critical of the current-day Austrian School and consider its rejection of econometrics and aggregate macroeconomic analysis to be outside of mainstream economic theory, or "heterodox

Self-organization Self-organization occurs in a variety of physical, chemical, biological, robotic, social and cognitive systems. Common examples include crystallization, the emergence of convection patterns in a liquid heated from below, chemical oscillators, swarming in groups of animals, and the way neural networks learn to recognize complex patterns. Overview[edit] The most robust and unambiguous examples[1] of self-organizing systems are from the physics of non-equilibrium processes. Self-organization is also relevant in chemistry, where it has often been taken as being synonymous with self-assembly.

Publications From astronomy to activism, from surfing to saving lives, Pro-Ams - people pursuing amateur activities to professional standards - are an increasingly important part of our society and economy. For Pro-Ams, leisure is not passive consumerism but active and participatory, it involves the deployment of publicly accredited knowledge and skills, often built up over a long career, which has involved sacrifices and frustrations. The 20th century witnessed the rise of professionals in medicine, science, education, and politics. Everything is fragmented-Complex adaptive systems at play Current design methods need a radical rethink. We must shift from a fail-safe design to safe-fail experiments. In my keynote at the KMWorld & Intranets Conference in September (available as a podcast at cognitive-edge.com), I elaborated on that idea and introduced the science of complex adaptive systems as a key piece of underlying theory to allow us to implement and, as importantly, to scale the change. When I talk about a system, I am not just talking about the technology aspects, but all of the human and environmental aspects.

Encyclopedia of Complexity and Systems Science Assembles for the first time the concepts and tools for analyzing complex systems in a wide range of fields Reflects the real world by integrating complexity with the deterministic equations and concepts that define matter, energy, and the four forces identified in nature Benefits a broad audience: undergraduates, researchers and practitioners in mathematics and many related fields Encyclopedia of Complexity and Systems Science provides an authoritative single source for understanding and applying the concepts of complexity theory together with the tools and measures for analyzing complex systems in all fields of science and engineering. The science and tools of complexity and systems science include theories of self-organization, complex systems, synergetics, dynamical systems, turbulence, catastrophes, instabilities, nonlinearity, stochastic processes, chaos, neural networks, cellular automata, adaptive systems, and genetic algorithms. Content Level » Research