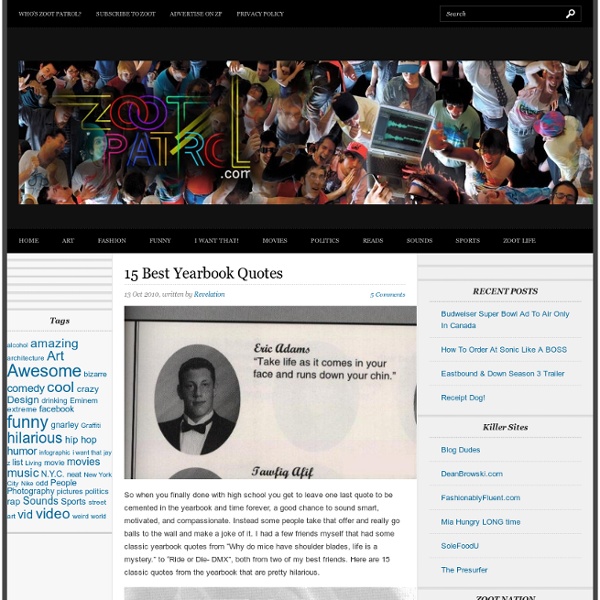 13 Oct 2010, written by Revelation So when you finally done with high school you get to leave one last quote to be cemented in the yearbook and time forever, a good chance to sound smart, motivated, and compassionate. Instead some people take that offer and really go balls to the wall and make a joke of it. I had a few friends myself that had some classic yearbook quotes from “Why do mice have shoulder blades, life is a mystery.” to “Ride or Die- DMX”, both from two of my best friends. Check the rest below. Related:  Profound Junk

The Shirt As with all these designs, try to start with a relatively clean, crisp bill. It will make it much easier. All folds should be sharply creased. It helps to go over the fold with a fingernail on a flat, hard surface. Start by folding the bill precisely in half lengthwise. Fold the bill one quarter of the way in from each side lengthwise. Turn the bill over. Turn the bill over again. Fold a little less than one third of the bill lengthwise from the opposite end as shown. Now you will fold inward in the same direction, tucking the previous fold under the "collar" created in step 4. Gently unfold the previous two folds, keeping the creases. (This step is hard to describe, but it is actually fairly easy.) (This is a close-up of what the fold should look like when complete.) (This is what it should look like after both sides are complete.) When you re-tuck the fold you've been working on back under the collar, you're done!

A Happiness Tip From Aristotle According to Aristotle - the answer should be NO. My favorite philosopher buddy Aristotle says true happiness comes from gaining insight and growing into your best possible self. Otherwise all you’re having is immediate gratification pleasure - which is fleeting and doesnt grow you as a person. In a way the above scenario is a description of someone who does crack or drinks into oblivion. At the time it feels like you’re avoiding pain and seeking bliss - but in longterm you’re NOT really enjoying real life — with life’s inevitable ebbs and flows which give you needed insights and exciting experiences which grow you and let you know more about who you are and what you love and who you truly love! Aristotle has a wonderful quote related to this topic: : I intuit what Aristotle was saying is that life has ebbs and flows. For this reason, Aristotle believed that the reason why so many people are unhappy is that they keep foolishly confusing "pleasure" for "happiness." {*style:<b> </b>*}

Musicovery Created Equal... Photographer Mark Laita In America, the chasm between rich and poor is growing, the clash between conservatives and liberals is strengthening, and even good and evil seem more polarized than ever before. At the heart of this collection of portraits is my desire to remind us that we were all equal, until our environment, circumstances or fate molded and weathered us into whom we have become. Los Angeles- and New York-based photographer Mark Laita completed Created Equal over the course of eight years; his poignant words reflect the striking polarizations found in his photographs. Bodybuilder / Amish Farmer, 2006 / 2004 Young Boxer / Retired Boxer, 2002 / 2002 Beauty Salon Customer / Man with Curlers, 2005 / 2004 Lingerie Model / Woman in Girdle, 2006 / 2007 Catholic Nuns / Prostitutes, 2002 / 2002 Vegetarian / Butcher, 1999 / 2004 Fur Trapper / Woman with Dog, 2003 / 2004 Amish Adolescents / Teens punks, 2004 / 2004 Mariachis / Elvis Impersonators, 2000 / 2002 French Chef / Short Order Cook, 2006 / 1999 More photos!

Average Faces From Around The World Added on Feb 08, 2011 / Category : StrangeNews / 228 Comments Finding the average face of people across the world was a tough job but someone had to do it. This guy basically takes a thousands and thousands images of everyday people from any city and the software makes an 'average' of the people, giving one final portrait. Take a look at this amazing project called "World of Facial Averages" If you like this article, Share it with the world: Attainablemind The 7 Habits of Highly Incompetent People - Global One TV By Michael Lee Number 1 - They Think, Say, & Do Negative Things. Yup. They see problems in every opportunity. They complain that the sun is too hot. They think that everyone is against them. Every little bit of difficulty is exaggerated to the point of tragedy. They never seem to move forward because they're always afraid to come out of their comfort zones. Number 2 - They Act Before They Think. They move based on instinct or impulse. Then they see something better. Then they spend & spend again until nothing's left. They don't think about the consequences. Number 3 - They Talk Much More Than They Listen They want to be the star of the show. Oftentimes they are not aware that what they're saying is not sensible anymore. When other people advise them, they close their ears because they're too proud to admit their mistakes. In their mind they're always correct. Number 4 - They Give Up Easily Successful people treat failures as stepping stones to success. Then they go & search for a new one.

Death by Caffeine We’ve used the very latest research to determine what’s appropriate for your body weight. See more about your daily caffeine limits. Recommendations for caffeine levels are different for aged 18 and under. Sure are. On the result, click on the item for more detailed caffeine information. Yes. A lethal dose is based on the amount of the caffeine in your system at one time. By using this calculator you agree to our terms of use. s Esoteric, Spiritual and Metaphysical Database