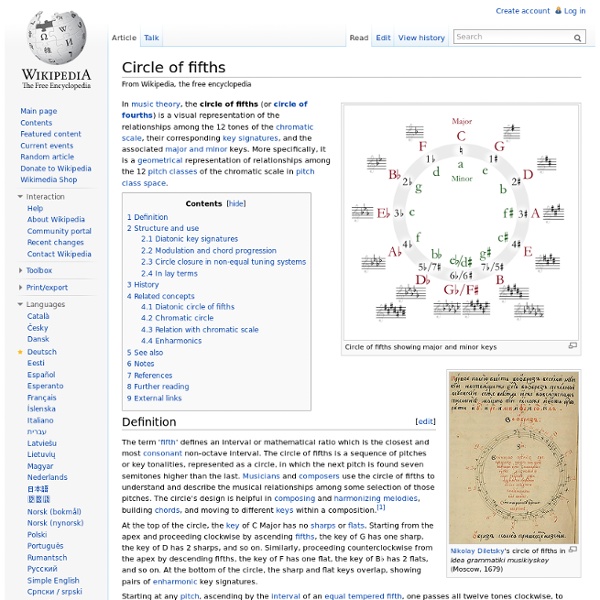 Harmonic series (music) Harmonic series of a string with terms written as reciprocals (2/1 written as 1/2). A harmonic series is the sequence of all multiples of a base frequency. Any complex tone "can be described as a combination of many simple periodic waves (i.e., sine waves) or partials, each with its own frequency of vibration, amplitude, and phase."[1] (Fourier analysis) Pythagorean tuning The syntonic tuning continuum, showing Pythagorean tuning at 702 cents.[1] Diatonic scale on C Play 12-tone equal tempered and Play just intonation. Why the circle of fourths is so important when learning major scales Playing your major scales should be a part of your daily practice regimen. However, practicing them in a “circle of fourths” or “circle of fifths” pattern is even better. Let’s focus more on circle of fourths.

5 Ways to Use Non-Diatonic Notes in Jazz Improvisation You want to play exciting solos… Ones that will make the audience sit on the edge of their seats, that’ll make you stand out from every other musician in the room. …except when you improvise everything ends up sounding exactly the same. Many musicians share this frustration and for many it goes right back to the standard approach to improvisation that you find in most books. The mentality that each chord has a designated scale:

The Chord Guide: Pt I – Chord Progressions Chord progressions are the canvas on which musicians paint their masterpieces, and it’s a canvas which is a piece of art in itself. A chord progression can be subtle and in the background or it can be blatant and up front; it can be simple and catchy, or it can be technical and complex, it can stay in one key or it can change like the seasons. In any of these cases a chord progression is what drives the song as it literally shapes the music that accompanies it. Chord progressions are like a cozy home where melody and rhythm can kick their feet up. All the songwriting giants, like John Lennon, Paul McCartney, George Harrison, and Bob Dylan, to name a few, have/had a tremendous knowledge of the art of the chord progression. I’m not going to promise you tremendous knowledge, but I will offer you a good head start in the way of making your own music – in an easily digestible chunk to boot.

Cool Jazz Chord Progressions for Guitar Are you looking for some cool jazz chord progressions for the guitar? Sometimes guitar players who are coming from a blues, folk or rock background think that jazz music is a cacophonous assortment of random notes. While such an argument could be made about some forms of free jazz, many jazz songs are based around standard progressions that aren't much different than the progressions found in other forms of music. Playing Guitar - Chord Progressions - Folk Music Part I: I-IV-V --the One-Four-Five Chord Progression The following article is intended to give you a better understanding of the relationships of the various chords to each other. If you're reading sheet music, it will help you make some sense of the changes.

3 Scientific Theories About The Multiverse And How It Works! www.thespiritscience.net | Original Post Date: June 6, 2014 As we look at this week’s evidence of gravitational waves and cosmic inflation, it’s becoming increasingly hard to believe that the observable universe we live in is the only universe there is. Even modern science is laying down its “knowing” cap in the face of such a grand and complex puzzle. The makeup of the universe, including all that we cannot see (which is roughly 99% of the Universe). Putting aside the hopelessly three-dimensional questions inflation raises, it’s unlikely that the story of the entirety of the cosmos (memorably defined by Carl Sagan as “all that is or ever was or ever will be”) happened to begin with the oldest event we can record, and happens to extend only to the furthest horizon we can see.