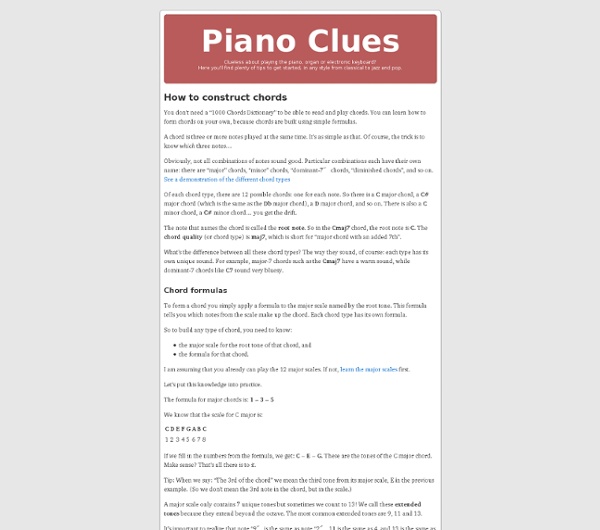 You don’t need a “1000 Chords Dictionary” to be able to read and play chords. You can learn how to form chords on your own, because chords are built using simple formulas. A chord is three or more notes played at the same time. It’s as simple as that. Of course, the trick is to know which three notes… Obviously, not all combinations of notes sound good. Of each chord type, there are 12 possible chords: one for each note. The note that names the chord is called the root note. What’s the difference between all these chord types? Chord formulas To form a chord you simply apply a formula to the major scale named by the root tone. So to build any type of chord, you need to know: the major scale for the root tone of that chord, andthe formula for that chord. I am assuming that you already can play the 12 major scales. Let’s put this knowledge into practice. The formula for major chords is: 1 – 3 – 5 We know that the scale for C major is: There are also formulas that contain the symbols b and #.

Learning and Loving Music Theory Kelvin, You actually caught a mistake on the roman numerals! Thanks, I’ll have to fix that. The first and last chords of the progression are not 7th chords. Somehow I inadvertently typed “I7″ on the first chord of all the major keys. (Notice that I didn’t do that for the minor keys.) Scales and emotions See also a post about making chords from scales. So maybe you want to write a song or an instrumental in a particular mood or style, and you’re feeling overwhelmed by all the scales. Here’s a handy guide to the commonly used scales in Western pop, rock, jazz, blues and so on. Click each image to play the scale right in your browser with the aQWERTYon.

Fundamentals of Piano Practice: Soft Pedal, Hammer Voicing and Physics of the Piano Sound Grand pianos: The soft pedal is used to change the mood of the sound from percussive to more serene and gentle when the soft pedal is depressed. It should not be used solely for producing a softer sound because it will also change the timbre. In order to play pianissimo, you will just have to learn how to play more softly. You can produce very loud sounds with the soft pedal depressed. One difficulty with the soft pedal is that it (una corda, or more correctly due corda for the modern grand) is often not indicated, so the decision to use it is often left to the pianist. circle of 5ths text Find the Chords in a Scale Once more, the key of C is our reference. Because the Circle of Fifths can help us name the notes in any major scale, it can also show us the chords in a major chord scale. Here's how: First, remember that any key has a set of chords which go with it, just as it has a major scale of single notes.

50s progression 50s progression in C, ending with C ( Play ) The progression, represented in Roman numeral analysis, is: I-vi-IV-V. The Cube Game - Find Out The True Nature Of People In this video I am going to play with you The Cube game. This psychological game is from the book “Secrets of the Cube” .

Properties of musical modes Modern Dorian mode on C Play Early Greek treatises on music do not use the term "mode" (which comes from Latin), but do describe three interrelated concepts that are related to the later, medieval idea of "mode": (1) scales (or "systems"), (2) tonos—pl. tonoi—(the more usual term used in medieval theory for what later came to be called "mode"), and (3) harmonia (harmony)—pl. harmoniai—this third term subsuming the corresponding tonoi but not necessarily the converse (Mathiesen 2001a, 6(iii)(e)). Greek Dorian octave species in the enharmonic genus, showing the two component tetrachords Play