Ritual Romance In The Ergot Circle

A Brief History of Religious Sex. The religion of the Goddess, wherever it was practiced throughout history, has always been sex positive.

The most famous of the ancient rituals is the Hieros Gamos, or Sacred marriage ritual. Records of this ceremony have been dated as far back as early Sumerian, about 5500 years ago. In this ritual the high priestess acting as avatar of The Goddess had sex with the ruler of the country to show the Goddess's acceptance him as ruler and caretaker of her people. Here is part of the ceremony as translated from an ancient Sumerian poem. The High Priestess, acting for Inanna, is speaking to Dumuzi the new king. Now, my sweet love is sated. 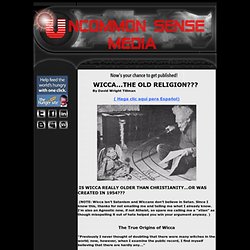 Both Gardner and Crowley were Freemasons. Crowley was made a 33rd degree mason in Mexico at the turn of the 20th century, and Gardner was in a branch of Freemasonry known as "Co-Masonry". Unlike most other branches of Freemasonry (Scottish Rite, York Rite, etc.) Co-Masonry allowed women to become Freemasons. This probably appealed to Gardner, who was a feminist. Along with the swords, blindfolding, and such of Masonry incorporated into Wicca, there also minor things as well. Some might wonder why Gardner would choose Masonry to steal rituals and ideas from. There was a time that this secret society wielded immense power. Even though I would say the average Mason is completely unaware of it nowadays Freemasonry is crammed with elements from the Cabala, Alchemy, Rosicrucianism, Gnosticism, the Templars (at least legends of the Templars), and astrology.

Yes, there is much Biblical symbolism in Freemasonry. "He then drank the wine. Frederick Turner’s Blog » Genesis: An Epic Poem. An Epic Poem by Frederick Turner Table of Contents Explanatory and Reference Material ACT I : The Origins of the War Scene i The Capture of Chance Scene ii Gaea and Garrison Scene iii Ganesh, Charlie, Beatrice Scene iv Sumikami Scene v Tripitaka ACT II: The Trial of Chance. 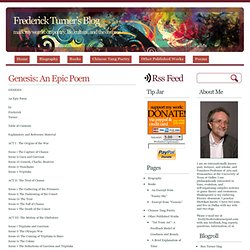 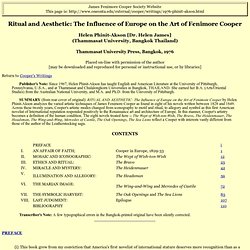 Helen James](Thammasat University, Bangkok Thailand) Thammasat University Press, Bangkok, 1976 Placed on-line with permission of the author [may be downloaded and reproduced for personal or instructional use, or by libraries] Return to Cooper's Writings Publisher's Note: Since 1967, Helen Phinit-Akson has taught English and American Literature at the University of Pittsburgh, Pennsylvania, U.S.A., and at Thammasat and Chulalongkorn Universities in Bangkok, THAILAND. SUMMARY (from rear cover of original): RITUAL AND AESTHETIC: The Influence of Europe on the Art of Fenimore Cooper by Helen Phinit-Akson analyzes the varied artistic techniques of James Fenimore Cooper as found in eight of his novels written between 1828 and 1849.

Transcriber's Note: A few typographical errors in the Bangkok-printed original have been silently corrected. This religious dimension was first alluded to by Thomas R. With Lounsbury's acid judgment of Cooper, Marcel Clavel totally disagrees. A Glimpse Of The Great Beyond. There has been so much material published on this site in the last few months, by way of posts and contributions, that I plan to make this the last lengthy feature for a while, not least because I want to carefully read again what others have sent in concerning other subjects and respond, if I can. 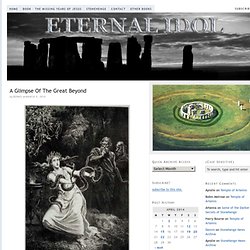 However, one theme in particular has struck me, and that’s the way in which some people perceive the world of the ‘supernatural’ and incorporate it into their view of Stonehenge in prehistory. I get the impression that some observers acknowledge the notion that our ancestors believed in supernatural entities and in the power of certain individuals to divine the future, but they keep their acceptance of this prehistoric mindset separate from their other considerations.