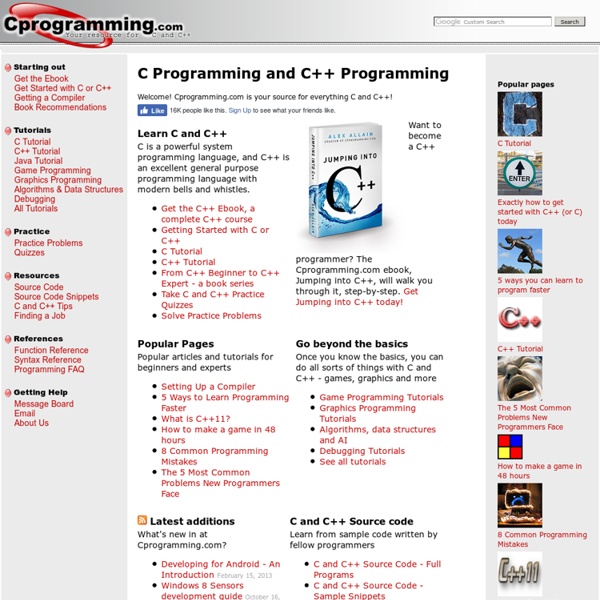 The C++ 'const' Declaration: Why & How The 'const' system is one of the really messy features of C++. It is simple in concept: variables declared with ‘const’ added become constants and cannot be altered by the program. However it is also used to bodge in a substitute for one of the missing features of C++ and there it gets horridly complicated and sometimes frustratingly restrictive. The following attempts to explain how 'const' is used and why it exists. Simple Use of ‘const’ The simplest use is to declare a named constant. Fear the Beard: Everything You Ever Wanted to Know About Facial Hair (Infographic) Ever wonder if growing facial hair has a purpose beyond making it easier to play “Spot the Hipster” at trendy urban coffee houses? Apparently it does. While modern may might grow a beard to intimidate opposing batters, prehistoric men grew beards to keep warm, intimidate enemies and protect their faces from punches. Plus, ancient civilizations saw beards as a sign of honor, and women today — while admitting they find bearded men to be 67% as attractive as clean shaven men — consider guys with full facial hair to be more respected, powerful and of higher status. READ MORE: 5 Places to Ride Peculiar Animals

C++ Language Tutorial This website uses cookies. By continuing, you give permission to deploy cookies, as detailed in our privacy policy. ok Search: YouTube Playlists for Learning Programming YouTube has been very good platform for learning any thing. Earlier you have seen 400+ courses on YouTube and 130+ NPTEL courses. There are few more courses especially about computer programming. These are contributed by various individuals. These videos are of short time around 10 to 12 min each, created keeping basic learners in the mind. Ask the iTunes Guy: iTunes tips 101 [Ask the iTunes Guy is a regular column in which we answer your questions on everything iTunes related. If there’s something you’d like to know, send an email to the iTunes Guy for consideration.] I get lots of questions about some of the basics of iTunes. These are things that may not be that obvious, but are practical to know and can make your use of iTunes more efficient. Here’s a selection of some iTunes tips. Q: I can’t seem to figure out which of the many playlists is actually playing.

The Earth – and Its Average Inhabitant – at 7 Billion People (Infographic) According to the U.N. Population Fund, on October 31, 2011, the earth became home to 7 billion people. And the population is growing quickly. Estimates put the planet at 8 billion in another 14 years, which is an eye blink compared to the 123 years it took us to go from 1 billion to 2 billion. How to Think Like a Computer Scientist — How to Think Like a Computer Scientist: Learning with Python 3 Version date: October 2012 by Peter Wentworth, Jeffrey Elkner, Allen B. Downey, and Chris Meyers (based on 2nd edition by Jeffrey Elkner, Allen B.

How to Crack the Account Password on Any Operating System – Joe Tech This guest post was written by Blair Mathis from LaptopLogic.com – your premier source for the latest laptop software news and best laptop accessories. Computer passwords are like locks on doors – they keep honest people honest. If someone wishes to gain access to your laptop or computer, a simple login password will not stop them. Most computer users do not realize how simple it is to access the login password for a computer, and end up leaving vulnerable data on their computer, unencrypted and easy to access.

Diamond problem Details[edit] Multiple inheritance allows programmers to use more than one totally orthogonal hierarchy simultaneously, such as allowing Cat to inherit from Cartoon character and Pet and Mammal and access features from within all of those classes. The widespread view that multiple inheritance is “bad” or “dangerous” is not justified; most of the time, it results from experience with imperfect multiple inheritance mechanisms, or improper uses of inheritance. Well-applied multiple and repeated inheritance is a powerful way to combine abstractions, and a key technique of object-oriented software development.[2] Implementations[edit]

What is an Operating System Not all computers have operating systems. The computer that controls the microwave oven in your kitchen, for example, doesn't need an operating system. It has one set of tasks to perform, very straightforward input to expect (a numbered keypad and a few pre-set buttons) and simple, never-changing hardware to control. For a computer like this, an operating system would be unnecessary baggage, driving up the development and manufacturing costs significantly and adding complexity where none is required. Instead, the computer in a microwave oven simply runs a single hard-wired program all the time.

The Basics of C Programming" The previous discussion becomes a little clearer if you understand how memory addresses work in a computer's hardware. If you have not read it already, now would be a good time to read How Bits and Bytes Work to fully understand bits, bytes and words. All computers have memory, also known as RAM (random access memory). For example, your computer might have 16 or 32 or 64 megabytes of RAM installed right now. How to Surf the Web Anonymously" The Internet has a way of lulling you into a false sense of anonymity. After all, how can anyone know your true identity in a virtual world? The truth is that simply by connecting to the Internet, you share information about your computer, your geographical location and even about the Web sites you visit. The goal of anonymous Web surfing is to circumvent the technologies that track your online activity and may potentially expose your personal information to others. By surfing anonymously, no one knows who you are, where you're connecting from or what sites you are visiting. When people think of surfing the Web anonymously, they automatically associate it with extramarital affairs, malicious hacking, illegal downloading and other sordid behaviors.

Using the GNU Compiler Collection (GCC) This file documents the use of the GNU compilers. Copyright © 1988-2017 Free Software Foundation, Inc. Permission is granted to copy, distribute and/or modify this document under the terms of the GNU Free Documentation License, Version 1.3 or any later version published by the Free Software Foundation; with the Invariant Sections being “Funding Free Software”, the Front-Cover Texts being (a) (see below), and with the Back-Cover Texts being (b) (see below).