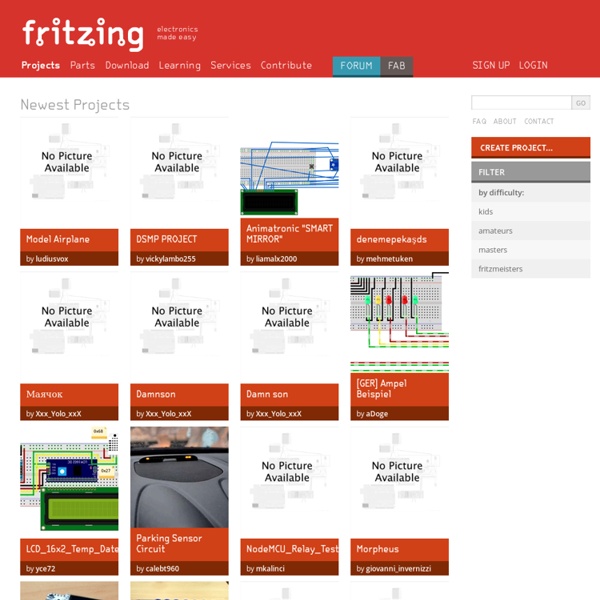 Open source hardware Open source hardware consists of physical artifacts of technology designed and offered by the open design movement. Both free and open source software (FOSS) as well as open source hardware is created by this open source culture movement and applies a like concept to a variety of components. The term usually means that information about the hardware is easily discerned. Test your sensors for line following robots - Site for electronics hobbyists and engineers There are two ways of making a line sensing/following robot, using a light dependent resistor(LDR) or Infrared(IR) LED. The fundamental logic behind a line sensing robot is that, a dark object reflects less light than a bright object, or we can also say, a dark object absorbs more light than a bright object. So, in a line following robot, we basically build a sensor that can detect the difference between a dark and a bright object, or say, a black line and a white surface. Before you fix the sensors onto your robot, you need to see if the sensors are really reflecting less light on black line and more light on white surface.

playground - Python Arduino and Python Talking to Arduino over a serial interface is pretty trivial in Python. On Unix-like systems you can read and write to the serial device as if it were a file, but there is also a wrapper library called pySerial that works well across all operating systems. After installing pySerial, reading data from Arduino is straightforward: Arduino 433Mhz Wireless Communication Rc Switch: 8 Steps AdWords We use AdWords to deploy digital advertising on sites supported by AdWords. Ads are based on both AdWords data and behavioral data that we collect while you’re on our sites. The data we collect may include pages you’ve visited, trials you’ve initiated, videos you’ve played, purchases you’ve made, and your IP address or device ID. This information may be combined with data that AdWords has collected from you.

Maker Faire New York Debrief - News by Emcee Grady | October 06, 2010 | 8 comments Share Use this URL to share: Share on Twitter Share on Facebook Share on Google+ As you may have known, Maker Faire New York has come and gone and SparkFun was in attendance. It was awesome! We saw some amazing projects, met some great people, and just generally had a wonderful time. How to Use IR LED and Photodiode with Arduino In this post I am going to show you how to use and program IR LED and Photodiode pair with Arduino to detect obstacles in a short range. Before going to do the project let us have a brief look at the IR LED and Photodiode. Photodiode is a light sensitive semi-conductor diode which converts the light energy into voltage or current based on the mode of operation. In general Photodiodes are operated in reverse bias condition. The clear Photodiode can detect visible and IR rays to limit the Photodiode to detect only IR rays a black cotting is applied to the glass of the Photodiode. The photodiode allows the current to pass through it if the photodiode is exposed to IR rays and it doesn't allow current to pass through it if no IR rays falls on it.

playground - 2B Python 2B 2B is a simple protocol used to receive and send messages to Arduino, it provides a convenient method to use the device in conjunction with a PC It uses a two ASCII chars based protocol to represent port address and value.For example, to set port 11 to 65 (pwm port), the first char will be "VT"(vertical tab) and the second one "A". see extended version of ASCII tableIn this way, the analog ports had been limited to 255 values. Any sign of 127 to 255 in ASCII table will correspond to the sign by the table as: Windows 1251 (Cyrillic), ISO 8859-7 or Windows 1252 (Latins).

Arduino NetServer To achieve Internet Controlled Electronics , in the other words , the main functions of Arduino NetServer are : Web Server handles the communication between your PC and Internet User. Serial Port will be the interface between your Arduino (electronics) Project and PC. The MacBook Air Samsung SSD is about to get twice as fast I had a chance to meet with Samsung Storage solutions at CES 2012 this week and got the low down on its new OEM SSDs that Apple tends to buy in large numbers. Samsung and Toshiba are the OEMs that provide the SSDs in MacBook Airs. Samsung’s 470 OEM SSD product is noticeably faster than the Toshiba model that Apple also puts in otherwise identical MacBook Airs. We have talked about the speed difference before and how Air-buyers often will pay a premium for the faster Samsung drives. Well, the speed difference is about to get even more noticeable. Samsung told me that it sold out of the 470 series OEM SSDs late last year and the company only makes a much faster variety: the 830 series.

How to build your own Quadcopter AutoPilot / Flight Controller Back to my home page Fig 1: 3DR Quadcopter Contents This article will walk you through building your own controller whilst teaching you the details of how it works. This information is hard to find, particarly for those of us who are not aerospace engineers! Fixing Linux firmware issues on Arduino Mega 2560 Early adopters of the new Arduino UNO and Arduino Mega 2560 using the Linux operating system seemed to have a number of bizarre issues with the serial port connectivity. Fortunately, the Arduino team just released a new firmware patch for the little ATmega8U2 microcontroller that handles the serial communications. They wrote up some great photos and instructions on how to re-flash your Arduino UNO. but they don’t have any information or photos for the Mega 2560. Well, tonight I looked at the Mega 2560 schematic and PCB layout files in Eagle, and figured out what I needed to do to properly reset the 8U2 serial port chip to enable the “DFU” programming mode. The general idea is to reset the chip while shorting two pads on the backside of the circuit board. The two pads you need to short are in a different location on the Mega than the UNO, and are highlighted in the image below in green.