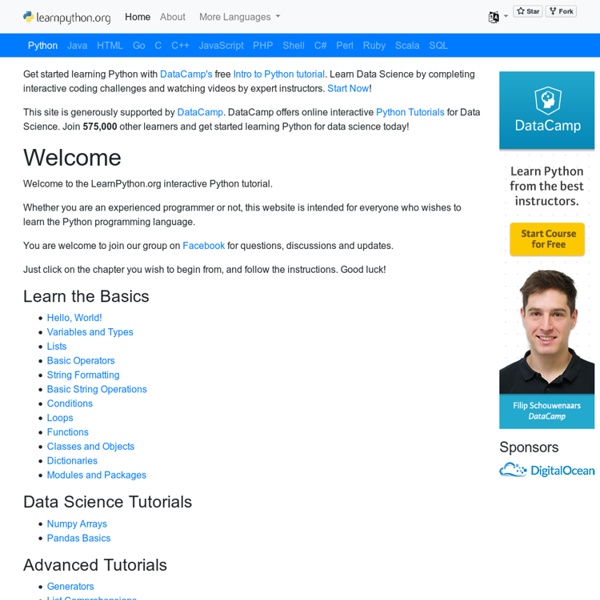 Welcome to the LearnPython.org interactive Python tutorial. Whether you are an experienced programmer or not, this website is intended for everyone who wishes to learn the Python programming language. You are welcome to join our group on Facebook for questions, discussions and updates. Just click on the chapter you wish to begin from, and follow the instructions. Good luck! Learn the Basics

S189: Introduction to Python - Materials This mini quiz is totally and entirely optional. You don't need to turn it in, it is all for your benefit. You are, however, more than welcome to go over your solutions with the teaching staff, or get help if you are having trouble with any of the problems. However, do try to give this an honest shot, as it'll help you get a feel for your programming skills. Handouts Tiny AVR Programmer Hookup Guide Favorited Favorite 2 Introduction Arduino is awesome. The boards are solid, the programming language and IDE are easy, and the community is awesome. But for a lot of electronics projects, an Arduino is overkill. If you’re just blinking a few LEDs, and reading a single sensor, you can get the job done smaller and cheaper using a simple IC, like the ATtiny85.

Getting Started with Python Programming and Scripting in Linux - Part 1 It has been said (and often required by recruitment agencies) that system administrators need to be proficient in a scripting language. While most of us may be comfortable using Bash (or other shell of our choice) to run command-line scripts, a powerful language such as Python can add several benefits. To begin with, Python allows us to access the tools of the command-line environment and to make use of Object Oriented Programming features (more on this later in this article).   Google Developers Welcome to Google's Python Class -- this is a free class for people with a little bit of programming experience who want to learn Python. The class includes written materials, lecture videos, and lots of code exercises to practice Python coding. These materials are used within Google to introduce Python to people who have just a little programming experience. The first exercises work on basic Python concepts like strings and lists, building up to the later exercises which are full programs dealing with text files, processes, and http connections. The class is geared for people who have a little bit of programming experience in some language, enough to know what a "variable" or "if statement" is. Beyond that, you do not need to be an expert programmer to use this material.

An Intro to Interactive Programming in Python - Coursera/Rice About this course: This two-part course is designed to help students with very little or no computing background learn the basics of building simple interactive applications. Our language of choice, Python, is an easy-to learn, high-level computer language that is used in many of the computational courses offered on Coursera. To make learning Python easy, we have developed a new browser-based programming environment that makes developing interactive applications in Python simple. These applications will involve windows whose contents are graphical and respond to buttons, the keyboard and the mouse. In part 1 of this course, we will introduce the basic elements of programming (such as expressions, conditionals, and functions) and then use these elements to create simple interactive applications such as a digital stopwatch. Part 1 of this class will culminate in building a version of the classic arcade game "Pong".

Thermocouple A thermocouple is a kind of temperature sensor. Unlike semiconductor temperature sensors such as the TMP36 , thermocouples have no electronics inside them, they are simply made by welding together two metal wires. Because of a physical effect of two joined metals, there is a slight but measurable voltage across the wires that increases with temperature. The type of metals used affect the voltage range, cost and sensitivity, which is why we have a few different kinds of thermocouples.

Style Guide for Python Code Code should be written in a way that does not disadvantage other implementations of Python (PyPy, Jython, IronPython, Cython, Psyco, and such). For example, do not rely on CPython's efficient implementation of in-place string concatenation for statements in the form a += b or a = a + b . This optimization is fragile even in CPython (it only works for some types) and isn't present at all in implementations that don't use refcounting. In performance sensitive parts of the library, the ''.join() form should be used instead. This will ensure that concatenation occurs in linear time across various implementations.

An Error Occurred Setting Your User Cookie This site uses cookies to improve performance. If your browser does not accept cookies, you cannot view this site. Setting Your Browser to Accept Cookies There are many reasons why a cookie could not be set correctly. Below are the most common reasons: Learn to Program: The Fundamentals About the Course A computer program is a set of instructions for a computer to follow, just as a recipe is a set of instructions for a chef. Laptops, kitchen appliances, MP3 players, and many other electronic devices all run computer programs. Programs have been written to manipulate sound and video, write poetry, run banking systems, predict the weather, and analyze athletic performance. This course is intended for people who have never seen a computer program.

Controlling an Arduino with an iPhone Skill Level: Beginner by Pete-O | November 30, 2009 | 72 comments You can download the Source Code here. How it works: In this tutorial you will learn how to communicate between the iPhone/iTouch app TouchOSC via a WiFi network to a Processing sketch displaying graphics and finally to control an Arduino board to light up an LED. Use Python with Your Neural Networks Neural Network Lab Use Python with Your Neural Networks A neural network implementation can be a nice addition to a Python programmer's skill set. If you're new to Python, examining a neural network implementation is a great way to learn the language. Get Code Download