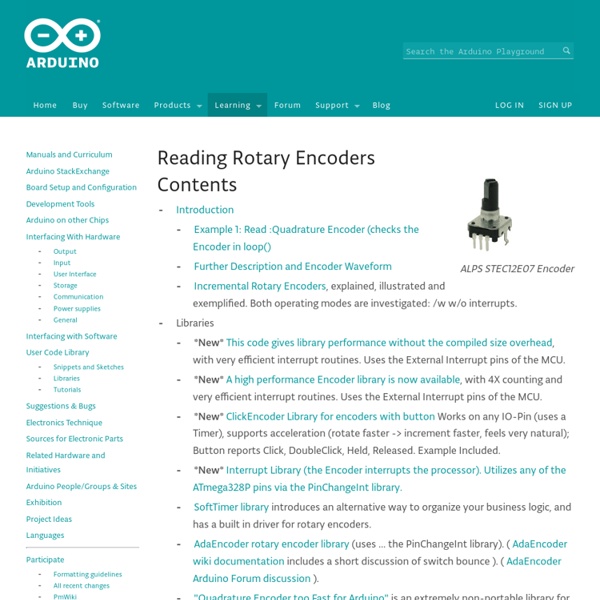 ALPS STEC12E07 Encoder A rotary or "shaft" encoder is an angular measuring device. It is used to precisely measure rotation of motors or to create wheel controllers (knobs) that can turn infinitely (with no end stop like a potentiometer has). Some of them are also equipped with a pushbutton when you press on the axis (like the ones used for navigation on many music controllers). They come in all kinds of resolutions, from maybe 16 to at least 1024 steps per revolution, and cost from 2 to maybe 200 EUR. I've written a little sketch to read a rotary controller and send its readout via RS232. It simply updates a counter (encoder0Pos) every time the encoder turns by one step, and sends it via serial to the PC. This works fine with an ALPS STEC12E08 encoder which has 24 steps per turn. I learned about how to read the encoder from the file encoder.h included in the Arduino distribution as part of the AVRLib. Example 1 Oh, a few notes: Interrupt Example Below is some code that uses an interrupt.

Schematic for Arduino Sensor Shield v5.0 ? - Arduino Forum - Aurora It's very unfortunate that the term "Arduino" is used both for a specific company name and also for generic module compatibility from any manufacturer. Arduino is a trademark that many folk in various countries are only too happy to violate. Consider how easy it is to violate said trademark, BTW. Unlike Digilent and other companies products' you don't even need to reverse-engineer the schematics, code, etc. because it's all published for the world to use. Most of the wares sold for less than $20 that claim to be Arduinos are in fact knockoffs whose sellers are predominantly based in the far east. My Mega2560 is marked "WWW.ARGUINO.CC" and "DESIGN IN ITALY". Well, reads like a knockoff whose intent was to skirt the trademarked name, much like "Rotex", "Prolex", and other variations of a well-known watch brand. My "Arduino Sensor Shield v5.0" has "SainSmart" stenciled on the reverse side, yet Arduino.cc sells an apparently identical shield with an identically-colored PCB.