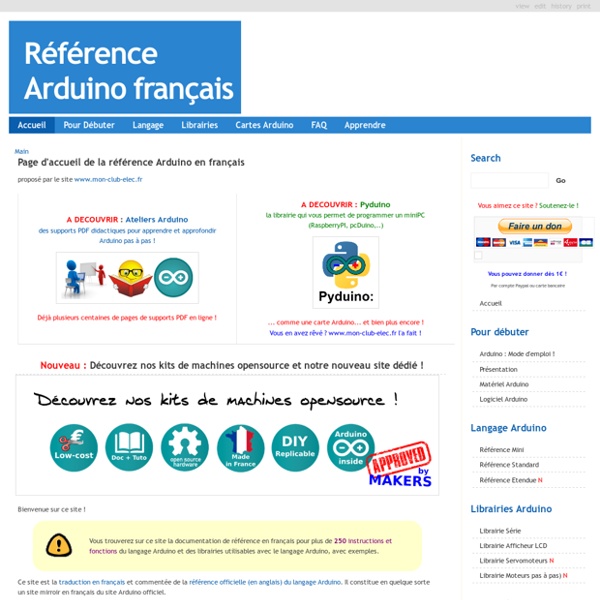 Guilherme Martins : PAPERduino’s design This is a fully functional version of the Arduino. We eliminated the PCB and use paper and cardboard as support and the result is.. the PAPERduino :D This is the the first version of the layout design, next we will try more designs, and another materials. You just need to print the top and the bottom layout, and glue them to any kind of support you want. We hope that you start making your own boards.

200+ Arduino Projects List For Final Year Students Arduino is a single-board microcontroller. It is intended to make the application of interactive objects or environments more accessible. The hardware consists of an open-source hardware board designed around an 8-bit Atmel AVR microcontroller, or a 32-bit Atmel ARM. ArduinoBoardMega2560 Overview The Arduino Mega 2560 is a microcontroller board based on the ATmega2560 (datasheet). It has 54 digital input/output pins (of which 15 can be used as PWM outputs), 16 analog inputs, 4 UARTs (hardware serial ports), a 16 MHz crystal oscillator, a USB connection, a power jack, an ICSP header, and a reset button. It contains everything needed to support the microcontroller; simply connect it to a computer with a USB cable or power it with a AC-to-DC adapter or battery to get started.

Home Automation Server - Project Example Tutorial Hi, In order to complete this tutorial you need to create your free account at HomeAutomationServer.com. What’s this all about? “We provide a free platform that allow you to control your home from anywhere in the world.” “Airduino” Scungy Anemometer Part 1: Detection and Amplification « Keith's Electronics Blog Necessity is said to be the mother of invention, and 90+°F daily temperatures with the air conditioner on the fritz made me feel pretty inventive. Our air conditioner was low on refrigerant and the blower fan motor may be running slower than spec and not moving enough air. Between the two problems, the expansion coil inside the furnace housing would ice up, over a few hours completely blocking the airflow and preventing any meaningful heat exchange. I’d then have to switch off cooling mode and run only the fan for a few hours to melt the ice. On a weekend when I was home all day, I discovered that I could keep the house fairly cool by setting the blower fan to run all the time, manually monitoring the airflow out the vents, and cycling the AC off when airflow was restricted and back on when it opened up. Which sounded like a perfect job for a microcontroller.

Arduino and Python For a project (check out my blog for updates) I'm working on I needed to be able to communicate with my arduino, luckily the arduino can communicate though serial. It turns out almost any programming language can be used for serial communication but python seems to be the easiest so far. I had some problems getting it all to work and finding a basic tutorial online proved very difficult. So hopefully this guide will explain the basics to anyone that is looking to start using the serial functions that the arduino provides. I'm going to assume that if you're reading this you have some knowledge of how an arduino works and how to upload sketches and what not, however I will explain the arduino code when we get there. The python code is very basic but I will do my best to explain it as well.

“Airduino” Scungy Anemometer Part 2: Digital Connections and Interrupts « Keith's Electronics Blog In part 1 , I described making a propeller out of foil to measure the airflow of my air conditioning system, building an optointerruptor from an LED and a CdS photocell, and amplifying the signal to a usable level. Next, I needed to feed the signal into a digital input on the Arduino. Old-school digital inputs don’t like having analog signals fed into them; but I knew from working with a PIC that some of the Arduino/ATmega pins would probably have Schmitt-trigger inputs, which have hysteresis. Windmeter / Anemometer by Infidigm Overview The Windmeter is an anemometer designed to measure and record wind speed distribution from 0 to 17+ meters per second. It was designed for high reliability, ease of construction, and for a wide environmental range. Data is logged over a period of 30.46 days (1/12 of a year), and then saved for 11 months. The data can be retrieved with a laptop computer any time within the 12 months of logging.

Getting started with Arduino! – Chapter Zero Hello world! Updated 24/11/2012 Please join with us as we learn about electronics and the Arduino! Together through this series of tutorials I would like to share with you a journey of learning, exploration and fun with the Arduino system, and make some enjoyable, useful, interesting, useless and practical things.